Death is part of life. I understand it now.
But it just seems wrong that the last part of your life should be brought on so quickly, without consent, without reason.
My English teacher shows us what hell looks like. It is gas chambers, and guns, and hatred, Hitler's face emblazoned upon banners scowling down at you. It is seeing your friends die before your eyes. It is being forced to shove your own mother into an oven. It is saying goodbye to your only sister, knowing that she will escape through the chimney, murdered by the cruel, sadistic inglorius guards trying to uphold Hitler. I see hell with my own two eyes, walk through it with my own two feet. I close my eyes and let the wind take me to a different time, in a different world. I think of what it would have been like to live there.
A pink triangle pinned on me. Why pink? Pink is for the homosexuals. Gulping, I look left, to the right. People thread off in both directions. The sky is gray with spirits rejocing in their freedom. People in stripes loom at me, their faces pointed and harsh, hungry eyes meeting mine. Their shoes are worm and blackened with dirt. A mother cradles her child, holding it to her breast.
Someone calls my name, jerking me to the present. The wind whispers in the trees, the hushed screams of millions of murdered people. My friend stands in front of an exibit, motioning for me to join her.
At first it seems unremarkable. Shoes litter the floor, feet deep, all different sizes, styles and colors. Then I realize with a sickening jolt what this is.
These shoes are the only remanents of their owners. My jaw hits the floor as my blue eyes scan this sea of shoes, fixating on a single baby's shoe. A baby, not yet old enough to walk, killed. A high heel, in the same style as I like. Sneakers. Flats. Mary-Jane's. Sandals. Every shoe imaginable, blackened by the ashes of its owner and caked with dirt, lies in front of me. My throat goes dry and my blood rushes out of my face as I see a pair just like the ones adorning my feet now, the same size, the same color, once. I imagine her walking through here, terrified every day of not seeing the light of the next one, and then having her worst fears realized. Tears choke me. I pick it up, feeling the rough leather crumble under my gentle touch. I cradle it to my breast, wishing I could show its owner the same affection.
Next comes the boxcar, where Hitler's prisoners were kept as they were brought from the ghettos to the concentration camps, without food or water, for days! I close my eyes again. The wailing of a baby pierced my eardrum. It's mother stroked it, whispering promises everyone knew were futile. Some looked out the window at Germany as it sped by, said their goodbyes to this world. We were strong. We all had someone to be strong for.
The present jarrs me awake again, and I find tears lingering in my eyes.
Next is the crematorium. Candles are the only light here, giving it an eerie, omnious glow. I feel the pain and suffering radiate off these walls, hear their shrieks, smell their fear, can almost taste the anger in the air-- anger well placed, anger at Hitler. Anger at the Nazis. Angry at the world for this to be able to happen. Trembling, I lift a finger to the names ingraved on the walls of the people who died here. My heart stops when I see W. Wa. Wal...
My family was killed here too, murdered brutally by sadistic, pediophilic Nazi bastards! Anger rises up in my chest, choked back with sobs. They ravage my body, leaving me whimpering, a small, quivering, helpless thing. Warm arms wrap around me, arms comforting me from the past, arms setting me apart from Hitlers terrible deed, restraining me from tearing apart this entire damned place. I sob in my friend Rachel's arms. She sobs with me when she finds her relatives etched on the wall.
We must never forget what happened here in the Nazi concentration camps. What happened to innocent, ordinary people like you or I. It makes me so bitterly resentful of my mop of golden hair, of the sapphire blue eyes that peek out from under it. The kind of complexion Hitler sought to make as the only one. I was furious to be under Hitler's thought of perfection, a hatred so strong I long to dye my hair black.
But doing so will solve nothing. We must remeber that love is infinatly strong, happiness is subjective, and words are endlessly powerful. 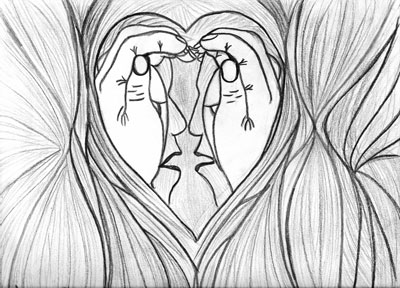