All Hands on Deck | Teen Ink

All Hands on Deck MAG

How has a recent artistic experience affected your intellectual development?

All 12 of us were huddled around a wooden post. I was bent over its hole, stirring concrete and helping to create a work of art. On a mission trip, we were struggling to build a deck for a woman in Ithaca, New York. This deck has become the most profound artistic expression of my life.

Each summer, my church’s youth group travels to a different city. On my third trip, I was the only non-New Englander, and though I explained my home was in northern Virginia, to them I was the Southern Belle.

Betty was an older woman who struggled to maneuver around her property. The long, jagged scars across her knees indicated that just standing caused her excruciating pain. When she introduced herself, her warm smile radiated gratitude.

Even though we were amateur carpenters and the blueprints were simple, the beauty of the deck was not in its structure but in the emotion behind it.

Magnificent art sparks in its observers an emotion, whether perplexity or joy. The best art draws exclamations, laughter, or tears. Blood and sweat went into our creation, and in my eyes, it is just as fine as any of the Wonders of the World. That deck symbolizes the bond between our crew who began as strangers and drove the last nails as close friends.

During that week, I befriended people I normally would not have. When we broke for lunch, we prayed hand-in-hand with Betty. An outspoken 17-year-old boy would squeeze one hand as a timid 14-year-old girl held my other. No complaints were voiced, even on our last workday when rain bathed our nearly completed deck. The boys, with more experience, encouraged the girls who were operating power tools for the first time. I couldn’t help but smile whenever I watched one poised girl rev up a circular saw. Behind her goggles, her eyes exuded newfound confidence.

I even picked up some Northern slang and so now, whenever I use the word “wicked” to replace “very,” I fondly remember that deck in Ithaca.

When we finished building, we stepped back to admire our work. One girl squealed with delight while the youngest boy sighed with relief. Another looked at a wound received from falling against a screw and laughed good-naturedly at the memory.

I jumped on the deck, testing its strength. When Betty saw our work of art, she wiped away tears. I can still hear her murmuring, “Thank you, all.” I left Betty’s home with high hopes for our deck’s durability but knowing that my memories of that week would be everlasting.

Betty’s backyard became more than a work site during that week. We began by building a service project, but ended with a work of art. We didn’t construct an extravagant wood pattern but the deck was still a masterpiece.

That week, I increased my carpentry knowledge. I learned the correct way to grip a hammer and to make sure a post is level in the ground before securing it with cement. Most importantly, I learned that the result of an experience doesn’t have to be displayed in a museum in order for it to be art. 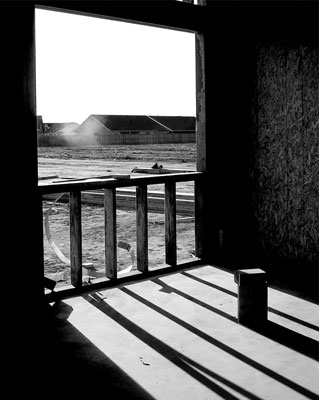 View profile
you're a terrific writer.