The man I photograph spends his days in the city library and nights on Park Avenue. He does not, however, reside in a luxurious home because the Park Avenue in Dallas is covered in boxes and unmovable bodies, quite the opposite of the same-named avenue in New York City. Only the hopeless remain on that frozen street during the day, while others find sanctuary in the warmth of the library. Inside, men and women rush with the purpose of finding books and getting back to their cars, hands firmly pressed against their wallets.

I expected the people from the Avenue to be outcasts of both the library and the streets. My assumptions illustrate the drastic misconceptions I once had for my city. Though trained to look down on adults who look down on themselves, I began to empathize. After spending a day with this man less fortunate than any I have ever seen, I opened my eyes to a different world, and I do not intend to close them.

The man with the magazines stuffed inside his coat pockets caught my attention. He had an exotic face. His too-short pants and beaten dress shirt implied his poverty. And his gaze differed from his companions’, which further intrigued me. I felt like he might be as out of place as I was; we connected for a moment. If I had known more about his life, I could have started a conversation. But I took my place at a nearby table and pretended to have come to the library for reasons other than photojournalism. Maybe I should have approached the fascinating stranger, but I foolishly doubted our connection. So, I left the library.

Walking back to my car with an un-touched 24-exposure roll of film in my camera, I felt embarrassed with my unusual shyness, but not discouraged. The experience sparked a new curiosity, and I felt overwhelmed with questions. This stranger’s life - in comparison to mine - left me wiping my eyes as I struggled with my car keys.

Though I did not capture my first encounter on film, my many other visits to Park Avenue now fill a portfolio with the stories of the men and women who live in shadows cast by well-endowed museums, nouveau apartments and corporate skyscrapers. While their haunting expressions once paralyzed me, they now enthrall me with a desire to study social conditions throughout the world. The streets opened my eyes.

I intend to focus my camera and my education on understanding social issues that plague humanity. 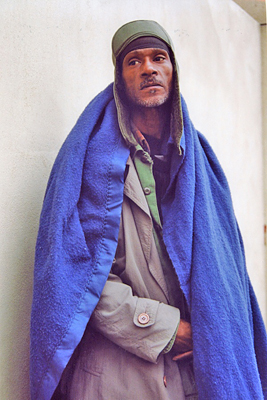