When I was 15, life seemed easy. My parents, still happily married, sheltered me, andGod blessed me with two sets of healthy grandparents. In my naive way, I believedterminal illness would never affect my family. In the summer of 2000, though, mygrandfather's doctor diagnosed him with brain cancer and gave him only ten monthsto live. Suddenly we all felt the presence of death.

My grandfatherpassed away exactly ten months later in a nursing home. He hated nursing homes,but by then he didn't even know he was in one.

His calling hours were thefirst I had ever attended. My mother and I clasped hands tightly as I looked atthe open casket surrounded with flowers. The baskets of flowers had ribbons, eachinscribed for my grandfather: Bompa (his grandchildren's nickname for him), Dad,Husband, Friend. As we approached the casket, my stomach tightened and tearswelled. My mother squeezed my hand tighter and kept me by her side. I hesitantlylooked in the casket. Bompa appeared just as he had before illness struck. Eventhough his eyes were closed, I could still imagine their twinkle, his wide smileand the jokes that made everyone laugh. I remembered his big round belly and hisdouble chin.

And I realized that he would never again make us laugh.Tears ran down my cheeks as my mother hugged me, rubbing my back as I sobbed intoher shoulder.

The next day, I didn't want to go to the funeral. My throatwas dry, my voice hoarse, but the time came to go to the funeral home and say mylast good-bye to Bompa. As I approached his casket again, I bowed my head andmore tears came. The world stopped as I searched the depths of my heart for theright words. I kissed his cheek and said, "I love you, Bompa, and alwayswill." At that moment I knew I would have to bury my dead many times. Thehurt, the disbelief and the terrible moment when it seems the world has stoppedwill happen again and again. In a flash, I grew up.

I looked at my familyand friends and knew that I could always turn to them while they're on thisearth. They are my guardians on earth, and Bompa is my guardian in the sky. - 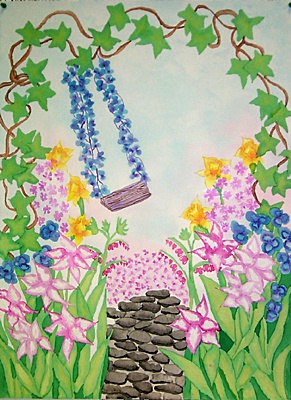