Three Reasons Why I Love my Father, the Seafarer | Teen Ink

Three Reasons Why I Love my Father, the Seafarer


I somehow believe that these three words can craft a man like Superman, not literally as a hero but someone you can idolize and be proud of. But where in this world I can find him? Is he on land, in air or at sea? To tell you, I know a man who is exactly the same to whom I describe and with all honesty, I have already found him. Next to God, he is an iconic man every child wants to have. Without much more explanations, he is undeniably my DADDY.


I am really grateful that he is my father. It seems I’m fortunate and blessed to have in my life. Though he is not always in my side because he is a seafarer, he never let me feel that he is far away. Time and distance never became a barrier in our communication instead they became the bridges between our gap.


My father’s love to me has made its way towards my heart. From the deck of the ship, across the sea up to the area where I am located, my father successfully delivers the warmth of his presence. Even he cannot express it through actions, he never get tired telling to me how much he loves me as his son. There are no weeks or months that he fails to call or send me a message. Some time when he calls, I can hear that he is still working through the clang of the chains and the noise produced by pounding off the rust, yet he can still manage to call me though he is busy but the sincerity of his voice is still there and it is already enough to make me realize that he is a loving daddy.


When he comes home, it gives me a chill of fright and excitement. You know why? He turns our serene house into a loud yet joyous one. He plays his old favourite boring songs from his laptop in the maximum volume from morning until evening. It hurts my ears- that‘s what I fear. And what excites me is that we are having this sing-along competition between the two of us, wherein we are vying to get a perfect score of 100 and whoever gets lower than this will be the one to wash the dishes. It’s challenging, right? That is why I really prepare my vocal chords when he says he’ll go home. I haven’t defeated him yet. But I promise I will make it next time. In addition, we also play computer games and have a little time for biking together and when we get tired of these routines, we go out shopping which makes daddy clamour to the stuffs and foods I buy.


During these moments, all the years of my longing for my father have been fulfilled and our bond has sufficed his previous absences. He really exerts his utmost effort to show and express his love. Usually, when I wake up, I am already leaning on his arm, and then he will squeeze me tight and kiss my head several times. I think he is paying back every second he was not with me but he doesn’t know that even he will do nothing; his presence is already too much to me because he’s the man of love.


Mainly, when we hear the word “seafarer”, we tend to picture out a wealthy fat man, dressed in fine suit and adorned with gold and silver accessories in his body. He lives with his family in a mansion, where number of cars are on the garage and enjoys bountiful delicacies every meal. But don’t include my father in the list because he is definitely different from any other seafarer.  I admit he is fat, but he is dressed in simplicity and only a single gold ring dwells in his finger. We are living in a small concrete house, bicycles are our cars and we eat typical foods every day. We are living away from luxury yet contented.


My father grew up without a golden spoon in his mouth. He experienced the pangs of hunger and hardship. And what he enjoys right now is because of his perseverance and steadfastness. For him, bragging himself is just a waste of time- it is not in his personality. Thus, he is the man of humility.


Lastly, my daddy is the man of resilience. In what way?


Living almost of your life in the ocean away from family has not been an easy task to most of the seafarers. Some retire or worse is some quit because of emotional effects brought by loneliness and absences of loved ones. But my father is different. He may tell as sometimes that he misses us and wants to be with us but still he never stops sailing and dreaming for us. He never let his weakness bring him down to his knees. He gives us the life where we will not suffer. I know, we are his source of courage. He is a true seafarer that whatever waves of circumstances or storms of difficulties hinder his voyage, he will bravely conquer it and hiding from it will never be his solution.


Superman is real. He exists in this world but this time he is not capable to fly above the clouds yet he can be either on land or at sea. Superman is my father, the living epitome of love, humility and resilience. He is the man woven by these three qualities, resembling a true blooded hero- a real seafarer.


I love him not because of what he has but because of who he is and I would gladly become his sidekick along his journey. May fair winds be upon his sail! 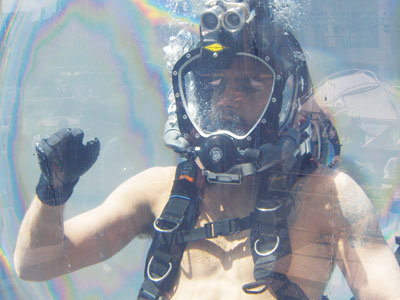