The Colony (its just the beggining!) | Teen Ink

The Colony (its just the beggining!)

We were a colony. We were all hiding, from the world, from our problems; some of us were even hiding from ourselves. Our path was untraceable to the outside world; we’ve never been caught. All of us had our own stories, laced with crime, passion, death and life. And, I’m here to tell you mine.

I gazed out the mud- tinted window. I could feel with my whole heart, my whole soul, that I didn’t belong here. Every inch of me itched to be out into the world. My palms were sweating and my heart was racing, my yearn for that sweet taste of freedom was agonizing.

“Sam,” a deep voice said from behind me.

Sam was my name, short for Samantha. You got a shiner if you ever called me Samantha. No last name, either. It brings back memories of my past, and I honestly didn’t want to go back there.

I turned to acknowledge the man behind me. He stood at about 6’ 3” and had broad shoulders with muscular arms. The beard on his face was growing longer, because we didn’t have razors around here. It was Kirby; he was part of the group, the one with the temper and the good left hook. Bad combination, or good, depending on how you looked at it.

“We got a newbie,” he told me before I could answer. “Show her around, I don’t feel like it. Got it?”

I nodded. He never ‘felt like it’, so I was the one stuck with all the new additions to our clan. Not to mention, everyone loved to hear my ‘newbie speech’. It was entertaining.

“She’s over there,” He said, as he pointed to the corner near the only entrance.

He sniffed the air in her direction and looked back at me.

“Exactly,” I said. “Everyone here reeks, and I can’t smell a thing on her. It’s sickening”

I wrinkled my nose in disgust; I hated newbies, with their nice hair and fresh scent. They looked down on us, but, little did they know, they would be the same soon enough.

Kirby chuckled. That was something I liked about Kirby. If you talk to him, he’s an okay guy (considering his circumstances), but if you judge him, the ugly wrath
of his temper would rear its head.

“I know, I know,” he said. “No one likes a newbie. But go over and lay down the law, before she gets any ideas about us being the good guys.” He said as his eyes twinkled in anticipation.

I grinned at him and started my way towards her. Once she saw me coming she took one look at me and lifted her eyebrows in distaste. With no effort of hiding it, either.

I got as close to her as possible, but made a point to talk very loudly, for benefit of the others. “Okay, listen up, New Girl,” I started. I could feel tons of eyes on me; the speech that I gave the newbies was epic. “First of all, I want you to wipe that dirty look off of your face, because soon enough you’re going to look just like this. Oh, but not quite as good. Got it? You are going to smell just like this, and you are going to talk just like this, because that is just how things work around here. Get used to it. Secondly, you’re never allowed to question anything. At all. Ever. Got that? If you do you can expect one of these for breakfast,” I said as I held up my fist and wagged it in the air. My voice was getting louder and my audience was getting larger. The funny thing was, though, that everything I was saying was the complete truth. I took a breath and continued, “Just because you’re new and you smell nice, doesn’t mean that you are going to get any special treatment. Starting in approximately five minutes, you’re one of us and if you fall out of line, we are not going easy on you. That means you might want to stay quiet until you learn how it works around here, because if you so much as talk to the wrong person, your pretty little face isn’t going to be so pretty any more. Isn’t that right guys?” I asked and looked around. The colony all shouted in agreement from behind me, I gave her the nastiest grin I could muster, and stuck my hand on my hips.

She looked stunned. Her ears were bright red, but nothing else gave away her embarrassment. She had the same look on her face that every other newbie had. I could always tell if they were wondering if they should tell me off, and risk being beat on the first day, or staying quiet. The smart ones always stayed quiet, but some not so smart ones ended up sore.

“Well..?” I asked, waiting for her say something. I was so terribly antsy lately that I needed to take a swing.


She took a step towards me so that our faces were about an inch apart. He nose only came up to my chin, which was saying something, because I wasn’t particularly tall. She had sleek black hair that went down to the bottom of her ribcage; her eyes mimicked the dark color. He face was thin, and marred by scars, as were her exposed arms and legs. She would be very pretty if she hadn’t had so many scars. It kind of made me wonder what she had been through.

She slowly raised her eyes to meet mine. She cleared her throat. This should be good.

“Now, I’m going to warn you,” her voice was high, but slightly hoarse. “If you ever talk to me like that again, and I mean ever, I will pound your face in. No mercy.” She was whispering all this to me.

That was all that I had to hear. I clenched my fist, and hit her right in the face. It was fast, and there wasn’t a ton of force, but it was enough to send her tumbling back. There was a thump when she hit the ground, and a puff of dirt surrounded her from the floor.

I went and stood over her where she was on the ground.

“Not smart,” I said simply. Then I reached my hand out to help her up. 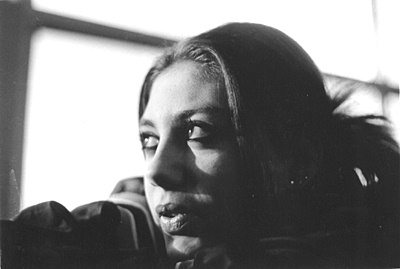 Favorite Quote:
"Try to learn to breathe deeply,
really to taste food when you eat,
and when you sleep, really to sleep.
Try as much as possible to be
wholly alive, with all your might,
and when you laugh, laugh like hell,
and when you get angry, get good
and angry. Try to be alive. You will
be dead soon enough."
William Saroyan

View profile
I liked it :) it was a little confusing though. Maybe polish it a bit....