About a Girl | Teen Ink

Everyday in our lives, little things happen; we make a certain decision or are affected by a choice someone else has made. It can be tiny or life-changing. Sometimes you don't find out until much later or it's too small to notice. For me, the circumstance seemed unimportant at the time. Now, looking back, I know it was much bigger than I realized.

The summer was fading, giving way to the worry of a new school year. For my younger sister, Samantha, and I it was also the anxiety of starting a new school. We were attending a small school about fifteen minutes regular drive away, and an hour bus drive picking up the students living on farms down the long dirt roads. It was located outside the town of Carpio, population 150 people, past the few farms and scattered trees, straight ahead on the flat land.

It was hard getting use to the plains of North Dakota. The sky felt so close because it met ahead of you on the same path your feet were heading. The sunflowers in the fields along the highway faced the sun with their open faces and the hay bails were scattered randomly on the rolling hills. It was so different from my mountain security of New Mexico.

Being pushed to accept our new home, Samantha and I hung out at the park, hoping to find someone we could attach to that went to our new school. After a few days of no luck, a girl was there. Her hair was long and golden, and her skin tan from the summer. She had a certain look that displayed her innocence. I placed her around my sister's age and went to sit on the swings while my sister made her acquaintance. It surprised me when my sister brought her over and informed me that she was in my class.

Her blue eyes seemed to ripple in the sunlight as she responded, “Yeah, my name's Katie. You must be the new girl.”

After the initial shock that this tiny girl was as old as me, we got to know one other. The small town didn't hold many other kids, so we only had each other. The next few weeks before school was full of chasing the rapidly reproducing frogs and discovering how well we meshed. By the time school began, we were completely inseparable. I can't remember exactly when we broke the hesitation and fully poured ourselves into each other, but I do remember the best parts of the next three years. We laughed more than humanly possible, we told each other every single detail of our histories, and gossiped about that cute boy in Biology. The nights ran late, the phone calls grew long, our souls became one.

Now I am more than 1,000 miles away from my best friend and no one even comes close to how comfortable and myself I was with her. Katie helped me transition into my new life, but that's not all she did. She taught me to never hold back what I have. She broke me out of my shell and showed me that you shouldn't be afraid to trust someone with yourself. That by trusting, things like friendship can become more than you ever dreamed of. 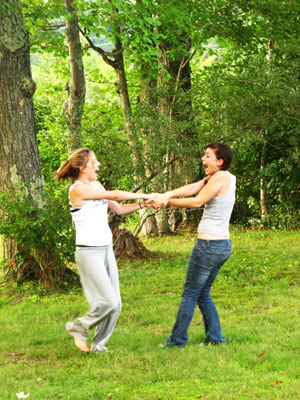