The Love of the Universe | Teen Ink

The Love of the Universe

Midnight winds sweep across the world, a silent breath to soothe the earth, which slumbers under the pitch black blanket of the sky, littered with the pinpoints of light that are the heavens. All those who dream upon the land remain oblivious to the whispered promises of the universe, finding bliss in their nightly hallucinations. But one lonely soul awakens throughout the darkened hours, hidden from the eye of the Rest. He hides in the shadows, gazing up at the endless expanse of Nothingness and Everything through wide, deep eyes that show in them masses of forests and the crashing spray of raging waves. His white hair glows brightly in the moonshine, soft as a dove's wing. He basks in the starlight, turning his skin an ethereal silver. Through his eyes, he recognizes the true size of all that exists and all that exists but is hidden from the naked eye. He sees the universe and the universe sees him in ways it does not see the Rest. It holds him precious and shields him from misfortunes for he is the only one who sees what its true nature is- a wild and unpredictable force that does as it wishes, watching for each effect and casualty of life. It loves him in its strange and unnatural way, and he loves it back. But lovers must be wary, they hold each other at arm's length, he knowing the consequences of loving one as vast and immortal the universe. The acknowledgement that all comes with a price is a unanimous one between the two for it is known that love and life are never everlasting for one day he will be dust and the universe will mourn, and one day the universe will finally be dust- be it an infinite amount of years -and there shall be no one left to shed tears over that loss. 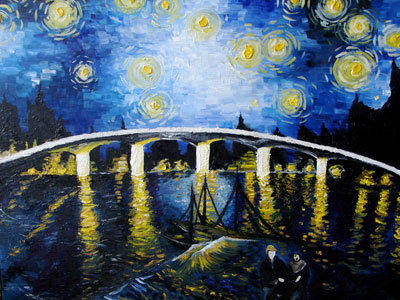 I wrote this piece outside on my deck, it was around one in the morning. It was a clear night and it was one of those nights where the stars and planets shone through the light pollution cast from the planet. Those are rare night and it gave me the inspiration to write this.