The Day ot All Changed

After my mother died when I was thirteen, my life was never the same. She was a tall woman with blonde hair and blue eyes and a smile like creamy hot chocolate on top of a marshmallow. Every night she would tell me, "You'd better not get too attached to me because you never know when I'll be dead and gone." I always laughed and cuddled back up with her when she said that. Never did I see the truth in her words.

It was September 17th midday when my mom announced that she had a new boyfriend. His name was Aaron Boswell and she described him as tall, hefty, with brown hair and dark blue eyes. I had never been very fond of any of mom's boyfriends, so why should this one be any different? She said that she invited him for dinner tonight and that Bridget and I had to stay in our rooms to give them their alone time.

Oh yeah, Bridget's my sister. She looks nothing like the rest of the family because she takes after Dad. Our dad isn't around anymore. He left us when we were ten. Bridget is almost the same age as me. She's born in July and I'm born in January. She has brown hair, light skin, and surprisingly aqua eyes. Sometimes at night when I'm getting a drink of water and I pass by her room, I look into her room and I see blue lights. But really they're just Bridget's bright eyes. She sleeps with her eyes open, you see.

Anyway, Bridget and I did not like the idea of spending our Friday night in our rooms, so when Aaron and my mom [Camille] were all lovey dovey in the front room, we opened our windows and snuck out into the night. We walked to Francesca's big party at the bowling alley and we had the time of our lives! John was there and I totally hit it off with him! So when we came home at 3:00 in the morning we were very surprised that Aaron's car was gone. Usually all of mom's dates spend the night and none of them mind that there is no extra bed. Maybe she just didn't like the guy. Bridget and I crept back in through our windows and got in bed and pretended to be asleep.

At seven o'clock we both expected mom to be up. She always gets up super early. At this point I was beginning to feel a little uneasy about this whole thing. I told Bridget to stay in her room while I go check on mom. To my horror, as I opened the door I saw blood sprayed everywhere and mom's lifeless body draped over the chair. Who would do such a thing to an innocent person!? Aha! It must've been Aaron! I'd never seen Aaron before in my life and I now wished that I had. If I did, then maybe I would be able to catch him.

But it was too late. My mom was already dead, Aaron was already gone, and my heart was already broken. I called Bridget in and we both stood in stunned silence at the scene around us. The mirror was broken, the piano destroyed, the sofa was ripped up, and everything was blood stained. I cried on her shoulder, then she cried on mine. It never occurred to me that we should call the police until twenty minutes after seven. I grabbed the phone and dialed 911. I told the operator all about what happened and he said he'd send someone in as soon as he could.

Five minutes later, we heard a knock on the door. I steadily opened the door and the police were waiting there, armed and ready. They asked, "What's your name?" I responded, "Olivia Cestwater." They shoved me aside gently and looked at the room with their eyes wide. Immediately they got to work. Three people were analyzing my mom's body, another three were looking at the damage to the sofa, about seven were on the phone screaming, and the rest were questioning Bridget and I about everything. How old we were, our relationship to the deceased, and where we were yesterday night. Then they asked if we had ever met Mr. Boswell and we both shook our heads. They asked us if we had any relatives that we could stay with and the only person we came up with was Aunt Daphne who lives in Minnesota. We don't have any relatives in California, actually. Just Dad's relatives and we stopped seeing them after he left. The cops said that we were going to have to stay with our Aunt Daphne for at least the time being. They assured us that they'd notify us if anything was found to clear up the murder of Camille Cestwater. We didn't exactly have very much, so we didn't really get anything valuable in the will. Just some old family photos and a thousand dollars. Not enough to live on.

Our aunt on the other hand was ten times as rich as us. Her house was three stories, her clothes were from only the most expensive companies, and her bank account probably took up half the bank. Camille and Daphne never really got along.

Ever since they were kids Camille and Daphne were exact opposites. One was into books and learning, the other into gossiping and shopping. Camille was the most popular girl in the grade, while Daphne didn't fall too high on the status scale. Everyone always expected Camille to succeed in life, even though she had none of the book smarts her twin sister did. Camille was the funnier, nicer, prettier, more popular, and the all around better sister. So after college Camille was in for a very big surprise when she found herself sitting on the streets begging for money. Daphne married when she was eighteen and married rich. The guy was a multi millionaire that she didn't even love. Camille on the other hand, went for true love and not what was in his pocket. She met Jason Cestwater while working at McDonalds a year later. They instantly fell in love. One day he proposed to her and the next thing you know, they were in the hospital waiting for me to enter the world. Six months later Bridget was born and that's when all the commotion started. It was hard for Camille and Jason to support two children plus themselves. We were living in pretty horrible conditions for a while. Then when I was ten, Jason finally had enough of being poor and slapped my mom on the cheek for destining them to poverty and he walked out the door. It took Camille a few months to recover but she was back on the market in no time. Things got better when mom became Assistant Manager at McDonalds and we were living much more stably.

So, being with Aunt Daphne will not exactly be a dream come true, but at least we won't be on the streets again. Aunt Daphne was to pay for the plane tickets and cab drivers, but the old windbag made us pay for half the costs! We were practically broke! Believe me, moving to cold and rainy Minnesota is not my first choice, so we shouldn't have to pay for it! Sorry, I've been working on my temper and obviously it's not improving.

Minnesota is cold. Minnesota is wet. Minnesota is STUPID! Aunt Daphne apparently lives in this small town in the middle of nowhere called Mabel. There are only 719 people living in Mabel, Minnesota. That's like how many people go to my school right now. Well I guess I'll just have to cope. We directed the cab driver to the exact house on the exact street that we wanted him to go to and we got out.

The trees were just letting go their summer feel and their leaves were beginning to fall off into pretty little piles of orange and red. It all felt very homey in a way except for the fact that it isn't really my home. All the houses were painted a boring cream or an even more boring white. Aunt Daphne's house stood out in two ways. One is its size. All the other houses on the street were one story and not longer than a hundred feet. Her house on the other hand was a massive building towering three stories high! She must feel a little lonely in her house. All this space for just one woman and one man. The other way it stood out is its barbed wire fence. This lady has an eight foot barbed wire fence planted right in front of her property. Like anybody in sweet little Mabel, Minnesota is going to break into somebody's house. It's going to be like a prison in there with that thing! But other than its enormous size and ridiculous security devices, Aunt Daphne's house is completely normal. Bridget and I were at the front door. Neither of us wanted to knock on the door. I'm sure we were both considering just running away. But we didn't. Finally, after my hands became numb, I knocked quietly on the door and hoped that the inevitable could be changed. But I knew that it couldn't. We would still have to stay with miss stick in the mud Aunt Daphne and her arrogant husband. I was just waiting for the realization of our situation to kick in. 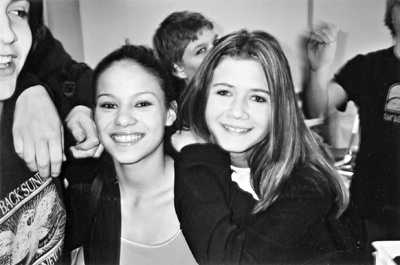 The author's comments:
I wrote this piece in like an hour so it's not that good. Please be frank with me and give me constructive critisism! The next chapters will be coming soon. Oh yeah, and i desperately need a title for my book, so if you have any suggestions tell me!
Post a comment
Submit your own

View profile
yeah, i totally agree.  i published this a while back (when i wasn't a very good writer) and then realized that poetry is my thing.  maybe u could look at some of my recent poems and you will like them better :)
Kalicat said...
on Jun. 6 2010 at 9:12 am
Kalicat, Ulysses, Kansas
0 articles 6 photos 40 comments

View profile
i like the concept, but you keep changing from past tense to present, and then back. i was a little confused about y they were so close in age, maybe you could explain more on that? and her sister sleeping with her eyes open, i really didnt get.