Her eyes shone like glittering garnets, all glow, red with hate and despair. She had the palest skin, of wintry cream origin, and that too was filled with malice. She was beautiful, and so deadly. She knew her power, and used it correctly. Always to her advantage. Her name is Sophia Muerte. Her body is covered with a thick, red gown, and a black shawl. The red gown has sparkles, gleaming sparkles that draw the eye over. The black shawl is the color of pain. It is the deep pit of emptiness that takes the soul in, but never returns it back. The color of death.

She holds a great wand up. It's the color of diamonds, sparkling with a deep intensity. She raises it above her head, and throws it down, to crash into a million pieces. They mutate- reform, they are evil little minions, dressed in silver suits. They bow their heads in honor of Sophia. She grabs a spear from a rack, and motions for them to grab their own. They do as told, grabbing the sapphire blades, and wielding them with an unseen grace.

Her own spear is amethyst, the handle golden with power. It is unique, different, as is she. Not ever quite found. So with weapons and an army Sophia moves, directing them to their new home. A little nest for them to roost, and hurt everything around them. So it begins...

They march loyally behind her, dead inside, but still moving. They are just copies of each other, none of them original. They are bitter, angry, desperate clones, unable to break free of this intoxicating Sophia. She knows this, and pits them against each other, to keep the strongest with her, and bid the weak farewell.

It is a walk of emptiness, only Sophia can feel the great power of the walk, the others just begin to drag their feet, slump their heads. They don't know why they are on this road. It is a dusty, sneeze-inducing road, with potholes, pits of water, and bugs. Sophia avoids it all though, as if she can magically keep it all away. The minions must face these treacherous terrors though, fighting to keep up with Sophia.

She tips her head back, and laughs, as it echoes up and down the cavern they have come upon. The minions eye each other, each wondering why she laughs. It is a cruel, harsh, fast laugh, filled with malice. It shows she is not afraid. It shows she will die or conquer... 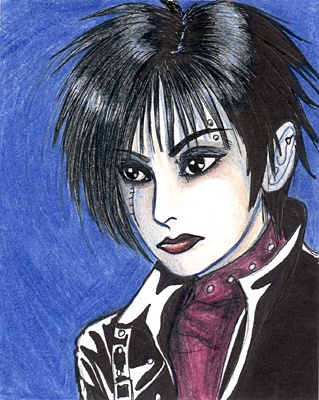 The author's comments:
This was written about my pain. Tell me what you think of it and I may write more.
Post a comment
Submit your own