A white house stood alone at the end of the lane. The sorry paint job was masked somewhat by the ivy that had been allowed to grow rampant there. The houses on either side sat empty, as though condemned by their dilapidated neighbor. At first glance it appeared vacant, unoccupied. It was not, however, empty.

A curtain was pushed slowly to the side, revealing a thin man in a tattered robe. His face held several days’ worth of stubble, and the hand that held the curtain shook slightly. “Lucas,” he mumbled. “Lucas.”

Behind him a small table sat against the wall, and another man sat there. He stared blankly across the room, aware only of the world that was playing out in his own mind. A small smile curled on his lip, and he ignored the drool that slid from his chin.

Two women sat together on the floor, one of them clapping quietly and the other counting furiously the tiles that lined the ceiling. There were others throughout the room, all of them completely oblivious of their own instability.

The man at the window turned to watch his neighbors. He counted each one of them in his head, and then counted them again. Satisfied, he nodded once and then made his way to the door. As usual it had been locked from the outside. He was a prisoner here, forced to sit still and hope that the voices in his head would quit yelling at him to kill the others in the room.

“You can,” the voice whispered to him, after the man had forcibly told it for the sixth time that he could not.

Warily, the nurse across the room watched the man war with himself. She hardly felt capable to deal with these people. She was, after all, barely twenty.

Sighing, she felt the bulge in her left pocket, making sure that her cigarettes were still there, and praying that her shift ended quickly. For a moment she was distracted, thinking longingly of her time off, and failed to notice that the man in the robe had turned to watch her.

He knew what she held in her pocket. Unbeknownst to her, he watched her religiously, studying her. He knew that her shift ended at eight. He knew that the car she drove was a silver Oldsmobile, but that she didn’t get into it until she had smoked three or four of the cigarettes in her left pocket. He knew that she left exactly two minutes earlier each day than she was supposed to, not waiting for her replacement to get there first. And he knew that she rarely locked the door behind her.

The clock on the far wall ticked obnoxiously, seeming to signal to the man that his time was coming. For once his head was silent, and he shifted closer to the door. Again the nurse touched her pocket lightly, and the voices began to yell at him again.

“Do it,” two of them said together. “Stay here,” one whispered to him, almost lovingly. “You cannot leave yet.” The man shook his head against the noise. They were the reason he watched the woman. They were driving him to do what they had told him over and over again that he should not. “Kill them,” they coaxed.

And so, as the clock hit two minutes before eight, the man followed the woman quietly out the door. He stayed far enough behind her that she did not notice him, but close enough that he could keep an eye on her every move. The shadows hid his figure from her, and he watched her carefully remove a cigarette, light it, and then lean back against the side of her car.

He waited until she had pulled a second one out of her pocket to reveal himself. He ignored her gasp of shock, instead focusing on the small white package that was lying temptingly on the hood of her car. She made a move to put it back in her pocket, but he was quicker than she was, and had snatched both the box and the lighter from her before she could grasp what had happened.

“I am Lucas,” he told her, and then turned down the path that led away from the house that had imprisoned him for the last twenty years.

A stream of swear words followed after him, though the man knew from the absence of her footsteps that she was not pursuing him. She had no reason to. Not when there were people she could call to do it for her.

It did not take long for the man’s lungs to start aching, nor for his slippers to get lost along the path. He slowed down considerably, walking barefoot now along a road that had turned into a dirt trail that he could not see the end of.

“You shouldn’t have left,” a voice reprimanded him.

“But I am Lucas,” the man responded, closing his eyes against the world, as if doing so would shut off the noise in his head.

The sun was just beginning to set when the man finally came to a halt. He looked about himself, wondering if he was far enough away, and then let a smile fall across his lips. He stood in the middle of a dying field, the grasses brittle from lack of rain. Here, in the middle of summer, the man knew that he could accomplish what he had set out to do.

The man looked down at the pack of cigarettes in his hand, crushed slightly after having been clenched so tightly in his fist. He held the lighter in his opposite hand, and this he used to set the tip of the first cigarette alight. He held it only briefly, continuing to smile as the voices in his head cried for him to put it out.

“I am Lucas,” he said firmly, and then held the first cigarette to the grasses below him. The smile broadened as a small flame began to lick its way across the ground. He lit several more cigarettes in rapid succession, letting each of them fall to his feet.

Freedom. The word had been sadly lacking within the man’s vocabulary. Now, among the growing flames, he came to understand exactly what it meant to be at liberty. He was completely alone here, without a single door to ensure his confinement. And while the voices in his head still raged, he knew that they would fade eventually. They could not last forever.

The field was almost entirely aglow now, the inferno ushered on by the same breeze that blew the man’s hair across his face. The hem of his robe was smoldering, and his bare feet were already blistering from the heat. The man welcomed the pain. This is what he had come for. This was his bliss.

Carefully the man bent lower to the ground, making sure to catch the edges of his sleeves on the flame. As the fire raced eagerly across his skin, the man found himself laughing. The voices were finally dying. At last he had found a way to conquer them. And as the flame engulfed him, he emitted one last cry. 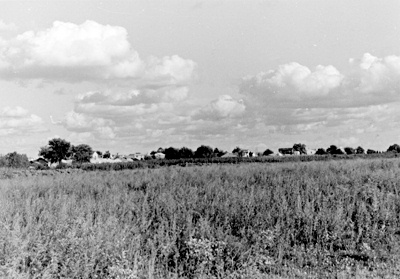