Favorite Quote:
10.
I am a princess, all girls are. Even if they live in tiny old attics. Even if they dress in rags, even if they aren't pretty or smart or young. They're still princesses, all of us." -Frances Hodgeson Burnett, A Little Princess
or
1.
Live in the present, remember the past and fear not the future, for it doesn't exist and never shall. There is only now." _Christopher Paolini, Eldest

All he wants is to hurt her. He doesn’t care about her. He doesn’t care that he loves him. He uses that to his advantage.
She persistently and naively holds onto the inane belief that he loves her too. She sits through the torture he puts her through. She doesn’t care. As long as she has the foolish hope that he loves her deep down.
But he’s incapable of love. It was never shown to him. His classmates shunned him, his teachers were vicious and uncaring, he had no siblings, his father perpetually beat him, and his mother was stiff and ignored him. He doesn’t know love because it was never shown yo him, so he can’t give it.
You can’t give what you don’t know.
He beats her and the purple bruises spread. Spread across her arms, her chest, her face, her back, her stomach, her legs. Blood gushes from the split lip that appeared when his fist met her face.
As he pounds her with his fists, she cries out one thing in between her sobs.
‘Love me!’ she screams through her tears.
‘Just love me, Robert!
‘Love me and you’ll see!
‘You’ll see you have hurt!
‘Hurt for too long!
‘I’ll help you!
‘Help you carry the pain because you shouldn’t have too!
‘You shouldn’t have to bear it alone!
‘Because you were never shown!
‘Shown to love!
‘Let me in!
‘Just let me in, Robert!’
He never listened. He kept on beating her. But this time would be his last.
He killed her. But nobody knew. He claimed he wasn’t home. He trashed the house and blamed a robber. Lucky for him he wore gloves so the forensics team didn’t find his prints on her.
Her headstone claimed she was loved by all. But nobody knew how he felt. Her obituary only said good things. If the truth were known, it would have said:


Malena Carson was loved
by all but the one she sought
it from. She spent most of her
life loving a man who could
only hit her and died as she tried
to do just that. Nobody could
have saved her. She was meant
to live and die as a naïve and
loving person. And she did.
Malena Carson will be missed
By those who gave a damn.
Every night, he dreamt of what he’d done to the one person who cared. Her blood splashing against the walls and covering his clothes like spilt Kool-Aid. Her perfect skin covered in purple bruises and marks that match his fists. She screamed and cried. Begged him to love her and let her in. But soon she grew quiet and went limp.
Her lips let out one last word. One last tiny whisper.
‘Robert!’ was her last word as she slipped away. And died.
Her family grieves for her. He pretends to grieve with them. He never cared, though. Neither in her life nor her death, did her give a damn for the girl who was bold enough to love him. 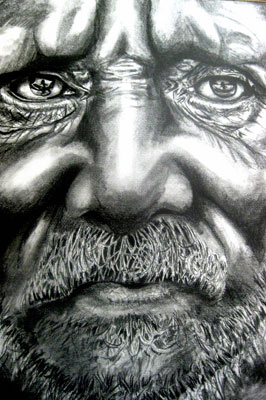 The author's comments:
This was written from what I think an abusive relationship would be.
The main plot to this is an abusive relationship that went from bad to dead.
There is an underlying plot though. It's loving a person despite their flaws and how they hurt you.
This is kind of a twisted romance.
~Kyla : )
Post a comment
Submit your own