Where Did You Go, Joe DiMaggio? | Teen Ink

Where Did You Go, Joe DiMaggio? MAG

Well, it was a December night last year when I steppedout of my house and met the cold air with shock. I strolled down the five blocksto the bar as I had many nights before, but this night would be different. Itwould awaken old memories.

I quickened my pace when the winter windpierced through my thick clothing. The lights of the pub grew brighter as my weakbody reached the door. Inside I sat at the bar.

"What will it betoday, Ken?" John asked.

"I'll have the usual," I respondedafter clearing my throat.

In seconds there was a beer in my hand. I raisedthe mug toward my mouth and took a large gulp. The aroma and taste of therefreshing beer cooled my boiling taste buds.

I'm not an alcoholic; I aman 85-year-old man. My stomach protrudes well beyond my waist, and I'm only ashell of my former muscular self. I come to the bar every Friday night tosocialize. I like to meet new people, learn new things and get in hot discussionsof stupid topics. My beer buddies couldn't make it that night, so I was all bymyself.

As two strangers entered the bar, I felt the night breeze sting myface and interrupt my thoughts. One of the strangers was about my size and lookedten years younger. He sat down next to me and ordered a beer. The other was talland looked to be about 35. I couldn't help but strain to hear their conversation.It began about a great baseball player named Joe DiMaggio, then graduallynarrowed to his 56-game hitting streak, a feat still umatched. Then it narrowedeven more when the men started talking about the night his streak came toan end.

"... July 16, 1941. No, wait, it was the 17th,"Pat stated (Pat was the old one, the younger one was Mike. I learned that muchfrom my eavesdropping.) "There were something like 70,000 people in theCleveland Municipal Stadium that night, all waiting to see Joltin' Joe continuehis streak."

I couldn't take it anymore. "Sixty-seven thousand,four hundred and sixty-eight people," I corrected, "the largestnight-game crowd in baseball history, thenanyway."

"What, were you there?" Mike askedsarcastically.

"Yeah," I nodded as beautiful memories camerushing back.

"Did you have a good seat?" Patasked.

"Well, I didn't really have a seat, I had something called aposition."

"You played in that game?" Their jawsdropped.

"Yep, third base for the Cleveland Indians," I said."He went 0-3 that game: walked once, hit a fly to center once and I robbedhim of a hit twice. In the first inning, he hit a screamer down the left-fieldline. My reaction time was phenomenal. I dove, ball met glove and rose up. Theball shot out of my hand with the speed and accuracy of a missile, toward theglove of my first baseman.

"At his next at-bat in the third, myheart beat steadily and my body tensed up as I waited for the first pitch. Iheard the crack of the bat, and watched as the ball sailed through the air towardthe glove of our center fielder, Carlton. He made an easy catch to end theinning.

"I could see the fiery look in his eyes as he came to bat thethird time. I could tell that nothing could stop this man. But, alas, the pitcherthrew him garbage and he walked to first base. The inning was soon ended by astrikeout.

"He came up the final time, bat resting on his muscularshoulder. He took two practice swings and stepped into the batter's box. Helooked straight at the pitcher beginning his windup. Joe didn't flinch as thepitch blew by him. My heart beat rapidly as he stepped into the box for thesecond time. My muscles tensed and my cleats dug deep in the hard clay. After acentury, the ball finally left the pitcher's hand. I saw it rise slowly off thebat. It came toward me like a rocket, and went over my head. Instinctively, Ileapt off the ground and snatched the ball out of the air like a frog does a fly.I brought the ball and glove down with the rest of my amazed body. My mind, tiredand astonished, had to think a moment before realizing the importance of thesituation."

I tooka quick glance at my watch. "Well, boys, it's getting kind of late, I thinkI should be getting home about now," I said politely. "Thank you forthe trip down memory lane, I really enjoyed it."

"Ourpleasure," Pat answered, still in awe of my presence.

I left the barand never went back, for a trip there could never be more pleasurable than thatone. 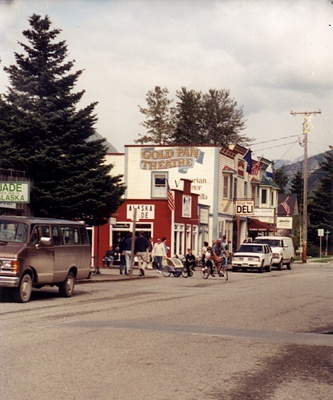