She was the average little girl to those who didn’t see her. They knew her but didn’t acknowledge her. They saw her but didn’t want her. She went to school like every other kid. Her short height, brown curls, and hazel eyes didn’t sand out among the girls her age. What no one saw was what she hid under her shirt. Those who never looked never knew.

She was average to the look but she had a secret that she only hid from the blind. What she hid anyone could see. She didn’t lie about it, for she was told don’t tell till asked. She call all who didn’t know the blind. What else could she call them? The stupid? The unobservant? The none believers? What they didn’t see was obvious to those who know.
If they chose to look then they would see. They would see that on her back under her shirt was a bump. If they looked closer then they would see that, that bump turned in to a small set of wings. Pure white wings that felt like air and looked as white as clouds. When they saw that they would see the glow that came off her skin and then circle of lights that hovered her head. To see those they would have to see the wings first. She did not hide them. People would just have to look.

All the kids knew about her. She would tell her story to them at recess. Their favorite story to hear during free time. The adults didn’t believe for they were blind. They chose not to see what was there to see. They thought that, that could never happen. A little girl looking the age of 7 being the age of 1,723 sent from heaven to find the believers. They didn’t see what they didn’t believe, they were blind.
All the children believed of course. They saw the wings and when they did the wing came out of the shirt and did what she want them to. She wouldn’t fly but hover and if they paid close attention they would see she never touched the ground. She never trip. She was always graceful. The children believed and they saw what was there to see.
One little girl average height, brown curls, and hazel eyes, glowing with light, a halo shining bright, and pure white wings for everyone to see. She didn’t hide them. She did everything to make people see, but people see what they know and not what is there to see. She was sent to make the blind see and to make those who see believe. She was god’s angel that was there to save his children from there own blindness. 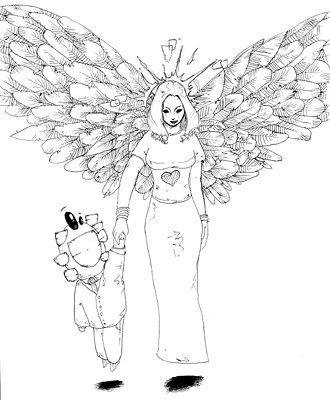