There was a banana. And the banana was almost yellow. It had large brown spots and a rubbery peel. It was just an ordinary banana. Nothing special. But here it was, sitting in my fruit tray, among a few apples and the peels of an orange, untouched. Why had no one bothered to eat it when it was ripe and ready? Did it do anything hurtful or mean that it should be just left there to rot? I sat there leaning on the table, frowning at the ruined fruit that no one wanted. The poor thing. I know how it feels. Unnoticed, untouched. Not bothered to be cared for, no one asking how it was doing. Why? I ask again. We didn't hurt anyone, really. Maybe, perhaps, we did something wrong, something to offend, but everyone, and everything makes mistakes right? I reached my hand out, a finger, and traced the lone banana. I marvelled at how, even though it was there for days, weeks maybe, it had still made effort to keep some of its yellow, fighting away the ugly brown spots that dared to cover it and I sat up taller. Yes, banana, you are right. Who are they to put us down? Who are they to decide my mood? I picked it up and held it in my hands for a while. Then, slowly, I peeled off its layers covering its insides. Its true self. Its mushy deliciousness that no one wanted, that no no one had even seen. I threw away the peel, I held it high,
and ate the banana. 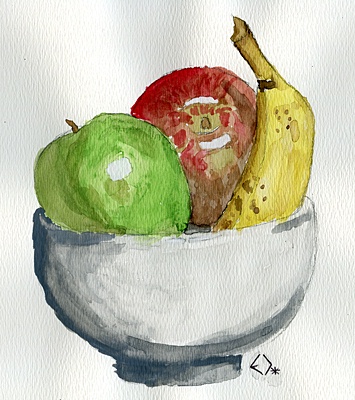 The author's comments:
I was bored, and decided to write about the first thing that popped in my head.. Which was the word banana.
Post a comment
Submit your own