Taking Off The Masks | Teen Ink

Taking Off The Masks

I feel, I want, and I need like everyone else, but there's something empty inside my chest. I don't know how to fill it; I don't even know how to approach a proper solution. Some may call this an identity crisis. Maybe they're right. But this much is clear: I have no idea who I am.

I've created this mask, an elaborate and intricate front, and I've been wearing it since as long as I can remember. So long in fact, that I can't even distinguish the front or the falseness, from reality. I'm at a loss of words to describe the storm that's wreaking havoc in my head. The amount of self-hatred I feel for myself is astonishing. How can I love myself if I'm not real? How can I love myself when I'm nothing but a sick persona I created in my head? I mean, who am I really?

Surely I’m not the blunt, outgoing, aggressive, and indifferent liberal as some know me by. Or the smart, ambitious, determined, and talented intellectual others see. I can't possibly be the clumsy, awkward, and shy weirdo either. No, no. I can't be these things because they aren't real. They are all the unique uniforms I put on every day to appease those around me. This me isn't a person, she's a character.

Maybe the real me is locked up, buried behind the phoniness, trying to claw her way to the surface. I have to shove her back down, keep her quiet. She'll ruin everything. My freedom, the release of my identity, comes at a detrimental cost: the exposure of my lies.

I wish I was a bad liar. God knows I wouldn't be the way I am if I was. I'm convinced my lying ability was a gift from the Devil. In each and every one of my personas I make sure to keep one front believable. I make people believe I'm a bad liar. Every good liar, especially a pathological one like myself, knows that in order to keep a lie going, others must believe you aren't capable of telling one in the first place. All lies are based off of trust. The stronger the trust, the easier the lies are received. The weaker the trust, the more room for suspicion, and there's a greater chance of consequence.

The trick to becoming a great liar is not only to masterfully lie to others, but to yourself as well. How can you expect someone to believe a lie if you can't even believe it yourself? For me, it's gotten to the point where I can't even determine if my memories are real or just some story I forced myself believe. I don't take pride in being a good liar, but it was a necessary skill as a child. My childhood wasn't great. I felt alone and singled out at school, and at home I was bullied. Rejection and low self-esteem have been my companions since Pre-K. They never leave my side, they always linger beside me.

I have tried to snuff out those monsters for years now, but that is like trying to run away from your shadow. I've tried to heal the scars with love, but I have no real concept of love, or rather, the type of love I have experienced is wrong. It was tainted and misguided.

I come from a broken home. Not physically, of course. My parents don't beat me, they aren't raging alcoholics or drunks, they don't sexually abuse me or my brothers, and they don't neglect us either. To some, that is considered a blessing. And it is, considering that I could've had all those problems. But regardless of that, my family is still broken. We are emotionally disconnected. I have an estranged older brother who hates the family, a cheating father with cheap promises, an unaffectionate mother, and a clueless younger brother. We're out of touch with each other. We go about our day, stuck in our little worlds, trying not to cross paths unless completely necessary. We're so unalike and yet similar at the same time. We are the prime example of "dysfunctional".

I think my family is part of the reason why I am so messed up. The connections I seek are not there, and although I know I'd be devastated if any of them died, they never got a chance to know the real me. They've only caught minor glances. We've never had the chance to share real love, to love each other because we wanted to, not because our blood made us. I guess I'm destined to be alone. It's a grim thought, but it's one I have to acknowledge. The real me is ugly and defaced. She's undeveloped because she's been locked away since I was a child.

Sometimes I stare off into space and get lost into nothingness. I fall into that hollow part in my chest, and just float around in my darkness. But when I start to sink, the secrets wrap around me and pull me into oblivion. My masks suffocate me until all else in the world is meaningless and void.

When that happens, I'm lost. My spirit disappears, and I become an aimless passenger of life. And it's in those moments of traveling through the astral plains of my mind, that I see myself clearly for the first time. 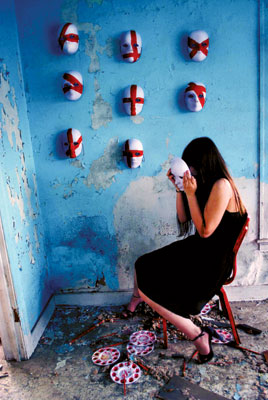 This piece was written during an identity crisis I had last year. It's crazy how low you think of yourself when depression hits.