Gregory Fisher was having an off day.

First he was killed by drunk driver. Now here he was, arguing with a gate.

"Look," he told the gate, wincing at the loud peal of angelic bells overhead, "I don't know what you mean, but--"

Identification required for entry, the gate said in a cool, electronic monotone.

"My name is Gregory, Gregory Fisher--"

Your key code is invalid, the gate said apologetically.

The gates to heaven were rather different than he had imagined: they were rather tall, rather fortified, and rather barbed. A little too much steel wire for his taste. He supposed it must be difficult to keep the creatures from Hell out of God's City. Through the gate's bars he caught a glimpse of said city, burning gold in the hot sunlight. It hurt his eyes to look too close. He turned his attention to the gate again.

"My name is Gregory Fisher, and I would like to ent--"

Your key code is invalid, the gate repeated. Complaints Offices are open from 9-5 most business days. Thank you for your time, please come again.

Gregory threw his hands up in exasperation. "Oh, for the love of--"

"Excuse me," said a booming voice. Its sheer force shook the ground, causing many heavenly rays of light to burst out of the clouds and bathe the speaker's perfect face in extremely good lighting. Gregory shaded his eyes as he looked up. "Is there a problem here?"

The man speaking seemed to be about as tall as the Statue of Liberty. He was dressed in creamy ivory robes with folds that rippled like a gigantic ocean. On his pale-skinned face was soft brown beard stubble, forming a comfortable pattern around his mouth and chin. His eyes glowed with the brightness of a thousand stars that happened to be blue. On his feet were the humble sandals of a prophet.

Gregory's eyes watered with joyous tears from this glorious sight.

The giant man looked down at him welcomingly.

Gregory wiped his eyes and cleared his throat. "Uh, yeah. This gate won't let me into your domain, Lord."

The man waved his hand dismissively, sending dozens of clouds sailing off with the force of the blow. "That's my dad. You can call me Jesus."

"What was it you wanted?" Jesus asked him. Gregory blinked.

"Right, yeah. Your dad's gate isn't letting me in."

Jesus twiddled his thumbs with the sound of a thousand pieces of sandpaper rubbing together. "Uh, this is pretty awkward," he said sheepishly.

"Well, I...I can't really let you in. Only my dad can do that." He looked down at his building-sized feet. Then he perked up. "Unless you have a gold card."

"A gold card," Jesus explained, "It's a card that grants residence in Heaven."

"So...it's a green card," Gregory said flatly. He was started to dislike this Jesus guy more and more.

"Sort of," Jesus said, looking down again. "Maybe a Letter of Recommendation would suffice..." he mumbled to himself not-very quietly. (It was fairly difficult to be discreet when you were 300 feet tall.) Gregory shook his head in disbelief.

"This is outrageous," he said.

"So...that's it? I can't come in?" He asked sharply. Jesus remained silent. "I'm not going to stand for this!" Gregory warned the vastly superior being, shaking his index finger about in outrage.

"Then what are you going to do?" asked Jesus.

"I'm going to...I'm going to..." Gregory thought about what he was going to do for a moment. "To take it up with your supervisor!" he announced finally. Jesus looked at him in surprise.

"Woah," said Jesus, in the most beautiful voice that had ever graced human ears, "that's pretty drastic."

"Um, okay. Got it. Uh..." he looked up towards the clouds above them and took a deep breath. "DAD!" Jesus shouted, causing tremors to go through the earth below them, making humans rue the day they ever doubted the Lord and Savior, "SOMEONE WANTS TO SEE YOU!"

"IS IT THE DELIVERY ANGEL?" an even louder, earth-shaking voice answered. "I'VE BEEN WAITING FOR THOSE CLOUD NINE™ SLIPPERS FOR CENTURIES."

Jesus held up a finger. One moment, he mouthed.

Finally, another large man came down from the clouds. This time, he was as big as the Spring Temple Buddha. His robes were even creamier ivory than his son's. His complexion was so incredibly glorious that it glowed platinum in the sun. Dozens of stage lights appeared out of nowhere, framing his awe-inspiring face with the tears of the angels. His eyes burned like blue suns, complemented perfectly by the smooth brown stubble dotting his face. He looked down at Gregory, who could do nothing but fall to his knees and openly weep at the sight.

"Oh. It's you," God said awkwardly, scratching his neck with the power of a hundred galaxies. "Do you have a request?"

"Your gate won't let me in," Gregory said angrily through tears of happiness.

"Well, this is rather unfortunate," God said. He sighed and the clouds dispersed from the sheer strength of his breath.

"What do you mean?" Gregory said as he stood. He was getting pretty irritated with these all-powerful beings.

"I mean that I can't let you in," God said in the most terribly beautiful voice in the universe.

"How so?" Gregory asked. He crossed his arms in defense.

"Borders? Closing? Humans?" Gregory spluttered. He found more words in this sentence to repeat in disbelief and did so for a good minute or two. At you, God held up a polished hand.

"We've been having a little trouble holding back the forces of Hell recently, " God explained, his voice making angels weep eternally, "so to keep them out, we are closing our borders for the time being."

"B-but," Gregory stuttered helplessly, "but I'm not from Hell!"

"How do we know that for sure?" God reasoned.

"You, uh...actually, I have no idea," Gregory admitted.

"See?" God rubbed his heavenly temples. "This is a difficult situation; if we let you in, other people will want to come in, and then more, and what if some of them are agents of Hell? That really wouldn't go over well with the angels."

As if to prove his point, a bunch of angels swooped past Gregory with Renaissance-period painted signs, reading things like

GO BACK TO EARTH, HUMAN!

ILLEGAL BEINGS GO BACK TO YOUR PLANET!

And other fairly offensive slogans in elegant cursive.

"You see," God said, clearing his throat with a rumble that warped time and space, "all these illegal humans entering without gold cards are really causing problems for us. It's just...kinda weird for you guys to be pouring in here, you know? I mean, I created Earth so you could live there."

"Illegal? I--I'm a devout Christian! I went to church every Sun--er, most Sundays!" Gregory shouted indignantly. "You have no right to treat me like this!"

God looked at him like he pitied him, but was also kind of worried the human would get dirt on his sandals. "Um, I mean...I guess you could figure something out. It's not like this is the only place you can go, right?" He laughed awkwardly and the skies rumbled.

"THIS IS THE ONLY PLACE I CAN GO!" Gregory shouted.

"Oh," God said quietly (as quietly as a four-hundred-foot-tall man could be), "that's pretty bad."

"If it makes you feel any better, we always have room for cheap labor."

God winced, and the world trembled with terror. "I didn't mean that--"

"No, really," Jesus interrupted, sensing that his father was not doing so well explaining this, "you could earn a gold card for you AND your family back on Earth."

"What exactly would I be?"

"Well, uh..." both deities found interesting clouds to look at.

Gregory shook his head in disbelief. "You want me to be a janitor?"

"And it's not full citizen status, but--"

"It could work?" God finished hopefully.

Gregory held his head and thought for a moment. "You know what?" he said with a glare. Jesus and God looked at him sheepishly. "I bet it's nicer in Hell anyway."

And so he walked in into the leaping flames opposite them. 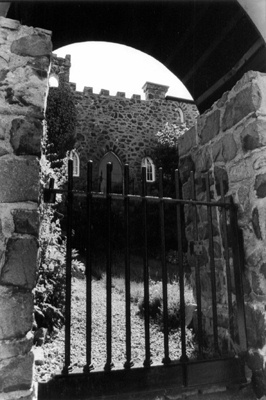 This piece was inspired by a fantastic story in the New Yorker (Judegement Day by Simon Rich, if you want to know). This is a little political satire about the immigration crises and general intolerance spreading around the world right now.

Favorite Quote:
everything in life is writable about if you have the outgoing guts to do it, and the imagination to improvise. the worst enemy to creativity is self-doubt. [sylvia plath]

Favorite Quote:
"If you have built castles in the air, your work need not be lost; that is where they should be. Now put foundations under them."
Henry David Thoreau

"I fell in love the way you fall asleep; slowly, and then all at once."
John Green

View profile
This is clever and hilarious and original and amazing. Keep doing what you're doing, because it's working wonders. :P