Favorite Quote:
"To the world, you may be just one woman. But to another woman who needs your words of wisdom, you may be the world." -Kelly Rudolph

It was a cold winter morning at the Springfield middle school, as two sisters were walking into the school; they were Hikari and Yoru Grimm. They are known as the Yin and Yang twins; the two are like the symbol of Yin and Yang because Hikari in Japanese means 'light' and Yoru in Japanese is 'night' both of them were total opposites, Hikari was outgoing and playful every day while Yoru is quiet and unsociable. During school, Yoru is getting bullied at school by Hikari’s own best friends, but Yoru kept quiet about the bullying; considering she does not want Hikari to feel sad or upset at her friends. The bullying to Yoru has started to where Hikari’s friends started to injure Yoru, which made Yoru not want to attend school at all.

As I walk with Hikari to the school I felt bitterness in my stomach boiling up I’ve been getting bullied for the longest time by Hikari’s personal best friends Rosey Star, Daisy Heart, and Synthia Flower. I have considered on explaining my situation to my twin although I have second thoughts on telling her since she seems so content with her friends during school; I don’t want her bonds with them to break. So I have been keeping quiet; I watch Hikari split off from me and run to her friends I notice that her smile was sparkling. I walk to my homeroom as a depressed feeling began to boil inside me. I sit down in my designated seat in the back of the class I got out my sketchbook and began to draw animals that I have seen in my backyard.

When Art class began; the teacher explained that we would be drawing something that signifies something to our person. When she said that I started to sketch out a flower being held by a hand with a garden of roses in the background of the sketch to me symbolizes that I am an outcast different from the others. It hurts inside when my bullies always pick at the flaws I have I understand that my sister cares about me a lot, but even though it’s her own friends who are bullying me I keep it a secret.

Although there have been a few times where when I come home I have bruises visible on my arms, legs, and face, so when that happens Hikari would question me to no end and each question I would answer with a lie. ‘I fell down the stairs at school’ or ‘I was helping someone after school and fell onto the ground’ these are a few lies I would use when Hikari asks me any questions about my bruises. I started to wonder how much longer I would be able to lie to my own sister about the bullying. ‘Hikari is most likely going to be upset if she finds out that I’ve been lying to her for the past few months about the bullying.’ I thought to myself since there have been a few occasions of where I have seen Hikari get upset at a few students during few classes to get their attention.

I stood up from my seat and went up to the teacher, “Ms. Heart, can I go to the bathroom please?” I asked my art teacher, she turned around and replied,

“Sure Yin and just remember to come back before class is over,” Ms. Heart said to me; I just nod and walked out of the class then headed towards the bathrooms, but when I got there I noticed that Rosey was waiting for me.

"What do you want Rosey?" I asked her with a monotone voice, as I notice a smirk on Rosey's face.

"I just wanted to see my favorite punching bag," Rosey replies with a sassy tone in her voice. After I heard that I began to get worried about what she was about to do to me, I don't want to have more bruises than I already do. 'What does Rosey want from me? What have I done to her and the other two? I don't understand.' I thought to myself, but my train of thought was broken by being pushed against the wall by Rosey.

"Let me go Rosey!" I spoke with hatred dripping from my voice, I hated that even if Rosey is caught the other two girls will always back her up in saying it was self-defense.

"How about no," Rosey stated then struck me in the stomach with a punch blowing the air out of my lungs as I coughed slightly. Rosey just drops me onto my back and walks away with a smug look on her face. I hold my stomach in pain as I slowly get up, I'm in pain from the punch I received from Rosey.

"Hey Yoru, are you okay?" I heard a voice behind me ask, I turn around and notice that it was Hikari.

"Y-yeah, I'm fine. I just have a stomach ache that's bothering me right now," I lied to Hikari's face, but her face contorted with concern,

"Are you sure? It doesn't seem like a stomach ache if you came to the bathroom and didn't head straight to the nurse's office," She stated with worry forming in her words. I let out a sigh and rolled my eyes,

"I'm sure Hikari. I'm fine, I told my teacher that I needed to head to the bathroom. You don't have to worry about me right now," I replied to my sister as I trudged back to my art class down the hall. When I got there I went straight to my seat and packed up my materials into my backpack;  I heard the bell ring, so I left to my next class which was LA, I am hoping that I won't bump into any of my bullies for the rest of the day.

When LA class began I started to daydream about sketches that I want to create my teacher started to hand-out the project of producing our own story while revealing that we know how a story is made with the parts of Plot. I was re-reading the short story 'Priscilla and the Wimps' by Richard Peck I listened the gossipers chatting about a lie that was spreading about me.

“I heard that Yin cheated on the previous tests in her classes,” A girl near me said I was agitated that someone began to spread that rumor about me cheating. I have a feeling that it was one of my bullies who started this rumor, this happens almost every day during school. The teacher began to talk but was interrupted by the bell ringing which signaled to the students that it was time for the next block. I packed up my things into my bag then began to walk to my next class which was study hall, I bump into someone and fell back I glance up and notice Synthia Flower standing in front of me; I shakily got up and looked at her in the eyes.

“I-I’m so sorry Synthia,” I stutter out after I did Synthia laughed then pushed me back down, ‘Why does this happen to me?’ I thought to myself,

“Sorry doesn’t cut it Yin you bumped into me, you should beg for forgiveness.” Synthia sneered at me as Rosey and Daisy came from the corner walking next to Synthia.

“What did Yin do to you Synthia?” Daisy asked Synthia politely with a venom dripping from the tone she used saying my name. 'I don't understand why they do this to me, what have I done to them?' I thought to myself as I get kicked in my stomach by Rosey the kick I received knocked the wind out of my lungs; it hurt as I try to regain my breath and steady my breathing. I was in pain as tears filled my eyes and Daisy has a sly smirk on her face and kicks me in my chest making me cough harshly. A soft whimper of pain slipped through my lips they kept going until a voice echoed through the halls.

"Daisy! Rosey! Synthia! What are you doing to Yoru?!" The voice shouts I recognized who the voice belonged to it was my sister Hikari! I weakly looked towards where Hikari was as she ran towards the four of us, "Why are you doing this you three?!" She yelled at her friends, it seemed like Hikari felt betrayed that her own best friends would hurt me.

"Your sister isn't supposed to be here at all! She's a freak that should only be at home!" Synthia said glaring at Hikari with rage in her tone as Hikari helped me get up then frowns at Synthia,

“If you do this to my sister then none of you are my friends anymore. I trusted you three when you told me that Yoru wasn’t being bullied by you, but you lied!” She said with venom in her voice as she carried me to the nurse’s office, “Yin...Why didn’t you tell me about being bullied?” Hikari asked me, but all I did was begin to cry as my sister started to comfort me by hugging me close to her, she was trying to help me calm down from my emotional breakdown.

“I hadn’t told you about being bullied because you seemed so happy with your friends and I didn’t want you to lose your friends,” I mumbled sadly to Hikari. Hikari hugs me tightly, after setting me down on the nurse’s bed.

“Yoru, you're my sister; I value you more than anyone and anything. So I don’t care if I don't have my friends anymore, because I love you and my family is important to me than anything here,” Hikari said thoughtfully, while tears slid down my face, ‘Why, am I so lucky to have Hikari as a sister who worries about me?’ I thought happily as I hugged Hikari, “I’m going to be explaining the situation to the principle to have your bullies suspended or expelled from school,” Hikari declared clearly with a grin my sister is scary to a certain point, but she is my twin I will love forever. 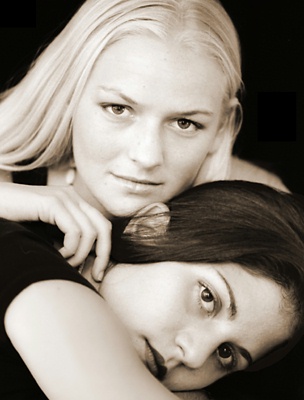 This is a story of twin sisters who represent the two sides of Yin and Yang.

Also, this was created for an assignment in LA class.