"Dude we totally need to get some research done on that demonic force...WHOOOO!!! MY HOUSE!" said Hajimi happily to Dai. It was very hot outside, summer was kicking into season as the two boys sipped on their iced coffees. Hmmm...Demon....,Dai thought to himself as he bit his red straw."Dai?" Hajimi repeated. Dai scratched his head in confusion, "Yeah fershure, we could check online, and read some articles." "Sweeeet!" Hajimi sipped on his coffee,"So, you asked Kimiko to the dance yet? You know you wan't her as your lady,haha." He gave him a nudge."Shes grounded for a month,my plans basically failed." Dai sighed and stared at the little clouds forming above Tokyo's sky. "Oh...WHAT A BUMMER! well I have my date as you know Taylor Chen of the Chens, you should ask Kat...shes as smart as a book and LOVES soccer like you do." Hajimi flashed a peace sign and patted his friend's back. Dai shook his head knowing that another girl couldn't take Kimiko's place,ever.

"Its MOVING!" Kimiko said jumping up and down. A red ball, shaped like a familiar childhood candy, was dead center in the middle of her floor moving back and forth. Akane narrowed his eyes as he observed the ball's movement. Suddenly, the surface began to crack revealing a pink shimmer. Kimiko's eyes widened. More and more as the ball moved the light became stronger forcing Akane to retreat to the closet. Oh! Kimiko thought.The force broke and a sword appeared in its glory. It was detailed in a red shimmer, with blue markings tracing from the end to the edge of the sword. At the bottom, ancient prayer letters appeared on its surface marking a fox symbol. "You know you have to pick that up, right?" Akane came from the closet fixing his jet black hair grinning. "It's your weapon, to fight of demons and shadows of the realm of darkness searching for gaurdian angel souls, good stuff like that." Kimiko took a long breath, and gently picked up the sword. Shoot! The sword quickly awakened, fueling blue through its designs, imprinting Kimiko with an ancient marking. Kimiko watched as the blue light surged through her body, connecting to her as its owner. "Great, it likes you, bravo." Akane sarcatsically clapped. Kimiko tested her reflexes with the sword, fast but not quite accurate in Akane's eyesight. "Aww man this it sooo awesome dude! When do I fight the bad guys??" Kimiko swung her sword at Akane, releasing magical feathers. Akane seized the sword,"Not until you practice, if you don't, your sword will not be able to defeat the shadows neither demons like me...Plus I need to give you an overview of the tale behind it..." Kimiko stepped back,"I can't...I'm...grounded." Akane stared in confusion. "You must sneak out. Once the Kitsune sword is awakened, the darkness is drawn to its good, which means if the evil is not cut off on a certain day, it will find you." "But..." Kimiko stared and sighed. Akane stared sympathetically with his soft reddened maroon eyes,"No worries, you'll get home quietly, your family wouldn't even know it." Kimiko laughed and tightened her fist,"Alright, let's do this thing!" 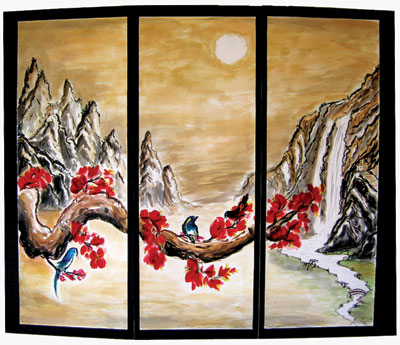 Favorite Quote:
It aint no thang but a chicken wang

View profile
i like it plz continue
Kitsu BRONZE said...
on Jul. 8 2010 at 9:33 pm
Kitsu BRONZE, Leesburg, Virginia
1 article 0 photos 3 comments
View profile
I like the story. it's slightly confusing in its transistion, but other than that, it's really good.