Well that was an exciting day. I’m completely exhausted because I haven’t slept for Almighty knows long. Last night after I finished writing, I snuck past Erinn’s sleeping grandfather in the living room and out of the house. I walked right out of the town and through the woods, almost to where the mountain pass was, but I turned onto another path that went south just before the pass. A few weak monsters tried to attack me but I defeated them with ease, they weren’t a huge challenge for a Celestrian.

Anyways when I finally made it to the Hexagon, a rock nearly fell on my head. People weren’t kidding about this place falling apart. Inside, there was a door that led to the rest of the area but it was shut tight. ‘Ugh,' I thought, leaning my head against the door. ‘Now what?’

Just as I thought it I faint light appeared behind me. I turned around and it was another one of those spirits. He beckoned to me and started to walk off through a different tunnel. I quickly followed and he led me to a statue of a dragon.

“Well this is a lovely statue,” I was so confused. “But it doesn’t exactly help me.”

“Back of... neck,” he said slowly, as if it was hard for him to speak. I walked to the back of the dragon statue and checked its neck. Sure enough, there was a little red button there. As soon as I pushed it I heard a rumbling from the other room. I smiled a thanks to the strange ghost man and ran off the other direction, back to the closed door.

When I got there it was wide open of course, the stone door moved aside by some force. I went through and after many dead ends and flights of stairs, I came across a purple-ponytailed lady who grinned at me despite the fact that her leg was stuck under a fallen rock. “Hey hun, think you can get me out of this? I got stuck under this stone when I was running away from some big ugly thing.”

I nodded politely and tried to pull the huge rock away. “My name’s Patty by the way,” the lady smiled, her eyes mischievous.

“Arabella,” I smiled. Just when I had almost moved the rock away, I heard a loud noise, and the ground began to shake.

“Oh wonderful,” Patty rolled her eyes. “Not this joker again.”

This “joker” happened to be a green, 8-foot tall furry rhino-like beast. I pulled my sword out from the sheath on my back and prepared for what was sure to be a fight. From the corner of my eye I saw Patty raise an eyebrow at me, surely doubtful on a slender, blue-eyed, scruffy blonde-haired teenage girl’s ability to fight off a beast of this size. Even I was a little doubtful, but a guardian’s gotta do what a guardian’s gotta do, right?

Not giving the beast time to move first, I jumped and came down on it with the edge of my sword. The beast roared in fury but it seemed to have not been weakened much. In retaliation, it charged at me quicker than I expected, catching me off-guard. The impact knocked me to the floor, but a few days earlier I had bought some nice leather armor and a shield at the local market, so it didn’t hurt as much as one would expect. As soon as I got up off the floor, the beast began to shake the ground wildly, sending chunks of broken rock falling from the ceiling and onto me. I crouched down, guarding my body with the shield while I tried to think of a new plan. This thing’s skin was obviously too tough to be dealt with easily, but I knew it must have a weakness somewhere. The neck area of the rhino seemed rather soft compared to the rest, so I figured that was my best shot. I positioned my body ready to spring and took a deep breath before dropping my shield, lunging at the rhino’s chest, and driving my sword right into its neck with both hands.

I rolled up off the floor to see if it had worked, and thankfully, it had. As the beast lay on the floor and bled out, I could sense the life leave its body. I retrieved my sword and shield, and went back over to Patty, who had freed herself in the midst of the battle. “Wow, kid,” she smiled teasingly. “To be honest I didn’t know you had that in you. Not as soft as you look, huh?”

“Thanks… I think,” I laughed. We walked back to Angel Falls, with few monsters in our path. I guess the rumbling had scared most of them off. Back in town, Patty headed for the inn, while I came back to Erinn’s for a while. Its morning now, but it’s not like I have anything to do today, so I think I’m just going to get some rest. I’ll write again later, I suppose. Goodnight… er good morning. 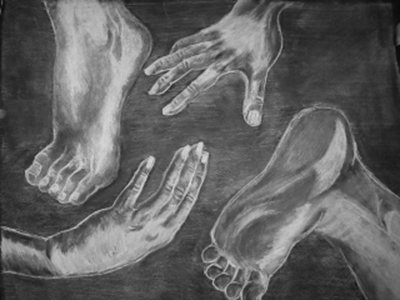 WolfWhisperer0911 BRONZE said...
on Jun. 23 2017 at 12:05 pm
WolfWhisperer0911 BRONZE, Austin, Texas
1 article 0 photos 623 comments
View profile
@RayBaytheDinosaur Wow, awesome job! I really enjoyed the story and even more so, I am a Fan of Dragon Quest IX! :) I played that game about 29 times and it never got boring. What I have to say is to be sure to include more description and maybe add another quote from Patty as she asked to the main character (or Arabella, which is a beautiful name) if she could remove the rock. You know, just to make the story be more like the game itself. But, overall awesome job!