Above the Surface | Teen Ink

Favorite Quote:
"Always borrow money from a pessimist. He won't expect it back." -Oscar Wilde

Robbie thinks it might have to do with the horrible stench of burned casserole that they haven't quite managed to clear from the house. Last Friday, Robbie had come home from work to a chaotic scene of open windows, blaring fire alarms, and a very panicked Trish. Their other roommate, Edwarda, made them call the fire department; after the firefighters handled most of the problems, Ed had yelled at Trish for thirty minutes straight. Robbie felt bad for Trish, so she bought her a cheesecake. The situation should have died down after that, but Robbie's calico Gertrude has been avoiding the house for days already.

Robbie's so tired today that she fills Gertrude's bowl when she gets home before she remembers that she hasn't seen her cat since the casserole incident. She hadn't been previously concerned about Gertrude's disappearance, but Gertrude was never gone for more than two days. Ed had suggested earlier, in that endearingly sarcastic way of hers, that Robbie give up and put out a missing poster. Robbie hopes she doesn't have to resort to it, but if Gertrude doesn't show up soon, she'll turn the entire campus upside-down to find her.

Someone knocks on a cabinet door. It's Trish. Robbie straightens from her position on the kitchen floor and settles the container of cat food onto the counter.

Robbie shrugs. "I hope so." She moves to hangs up her jacket on the row of hooks outside the door, but she pauses to study Trish's rumpled pajamas and messy hair. "Didn't you have class today?" she asks.

Robbie sighs. She's amazed that Trish isn't being held back for all the times she missed class, but Robbie firmly believes that Trish has a right to make her own decisions without judgment.

The front door creaks open and slams shut. Ed trudges into the living room, a permanent scowl set upon her face. She and Robbie work the same shift in the only coffee shop on campus, but Robbie has no idea why her roommate would rather walk home separately. She supposes that Ed likes peace and solitude on her way back; perhaps she pauses occasionally to enjoy the beautiful fall scenery alone. By herself. Without Robbie.

Ed glares at the recently filled food bowl on the kitchen floor. "Your cat didn't come back," she comments, shaking her head at Robbie. "What did I tell you about putting up that poster?"

"I disagree," says Trish. "I think Gertrude will come back to Robbie regardless. Stonewall always comes home to me every day."

"Stonewall is a freaking rock, you moron," snaps Ed. "Your argument is illegitimate. Besides, a missing poster isn't going to hurt anyone."

"Yeah it is!" Trish challenges.  "It's going to hurt Gertrude's pride. Why are you so quick to lose faith in such a loyal creature?"

Robbie inserts herself between her two roommates. "Guys! Stop fighting," she exclaims. "It's not going to help her. I think you both have a point. If Gertrude doesn't come back tomorrow, I'll make a poster. Deal?"

Ed throws her hands into the air. "I can't believe you're actually considering her point of view. Just make the stupid poster right now! It's common sense. God, I can't deal with you two idiots anymore." With that, Ed turns on her heel and storms into her bedroom.

"I thought Wednesdays were taco nights."

"Don't worry yourself about details," says Trish, ushering Robbie out of the living room. "Go get some homework done, pal."

Gertrude doesn't show up the next day, so Robbie takes Ed's advice and creates a magnificent poster with lots of word art and colorful pictures. Others might say that she goes a little overboard with the glitter, but according to Robbie, too much glitter can never be enough glitter. After the poster is finished, she presents it to Ed for evaluation. Ed only rolls her eyes. "You're making a missing poster, not a middle school art project," she grumbles. "The point is to make multiple copies so you can hang them up around campus. But whatever. Knock yourself out, buddy."

Unfortunately, Robbie's boss, Mrs. Krabs, doesn't let her hang it up at the coffee shop bulletin board on Friday. Mrs. Krabs, in that motherly Irish accent of hers, tells Robbie that "it's too big, lass. Takes the attention away from more profitable advertisements. Hang it in ye student center or somethin'." Robbie, crestfallen, puts the poster back into her locker and dusts off her uniform. She returns to the front counter, where Ed is taking orders.

An hour into their shift, Ed takes a bathroom break and heads to the back of the shop. Robbie's pretty sure that Ed just sits in a stall for half an hour playing Candy Crush on her phone, but Robbie's glad to cover for her. More work means more responsibility means more excitement, which is why Robbie applied for this job in the first place.

The bell attached to the front door jingles. Robbie glances up at the new customer with her brightest smile. "Welcome to The Koffee Krab! What can I get you?"

The customer smiles back, revealing a perfect set of straight white teeth. "Yup. Would ya'll be okay if I posted a flyer up on that bulletin board?" he asks in a heavy Southern drawl.

Robbie is entranced. She has never seen this person before; otherwise, she would have remembered his long, luscious chestnut hair and his strong jawline. Robbie glances at the stack of flyers in his slender hands. "It depends," she says. "What kind of flyers are you talking about?"

The stranger grins sheepishly. "Well, it's about a missing cat..."

"Oh my god!" Robbie exclaims, visibly startling the stranger. "That's so funny! I was going to hang up a poster about a missing cat too!"

He shrugs. "This wouldn't happen to be her, now, would it?" He shows her a picture on one of his flyers, and lo and behold, Gertrude is staring back on an unfamiliar carpet looking as content as ever.

"You found her!" Robbie blurts, overwhelmed. "Thank goodness! How...?"

"She was on my porch when I came home from class a few days ago," he explains. "I knew she wasn't a stray because she had a collar, but my roommates and I were glad to give her a temporary home. She's a real sweetie pie, your cat."

Robbie glances around. Unfortunately, a line is forming behind the stranger, and Ed isn't coming back anytime soon. "Thank you so much," she hurriedly exclaims. "For taking her in, I mean. Look, why don't you give me your address? I'll collect her when my shift ends."

Robbie gapes at him. "That's very kind of you, sir, but I still have three hours to go."

The stranger winks. "In that case, I'll have a medium coffee, black, please."

Robbie's too pleasantly surprised, so she makes him his coffee without protest. He pays for it and settles into a table near the counter.

After twenty minutes, Ed finally comes out of the bathroom in a seemingly better mood than she was before. Robbie can't help it. Once there's a lull, she pulls Ed into the back room and gushes about Gertrude and the mysterious stranger who found her. Ed picks at her chipping black nail polish. "What, are you in love with him or something?" she asks.

Ed sighs. "Whatever, SquarePants," she sighs. "I'll cover for you. Go get that stupid cat."

Robbie opens her mouth and closes it. "Are you serious?"

Robbie is unbelievably excited as they leave the coffee shop and start walking toward West Campus, the upperclassmen housing area. She makes it her goal to know as much about the stranger as possible and learns that his full name is Alexander Cheeks. Only his parents are allowed to call him Sandy; everyone else calls him Zander. Robbie laughs and introduces herself as well. "I haven't seen you around here before," she remarks. "Are you new to Bikini U?"

"Yup. I just transferred here from a college in Texas," he says.

Zander chuckles. "It's real obvious, ain't it? I went there 'cause it was close to home, but I couldn't find a satisfactory program for the fields I wanted to study."

"And what would those be?"

Robbie twirls a lock of her blonde hair around her finger. "Hospitality and tourism management. No minor," she says. "I don't know, I'm kinda still on the fence about it. I really like being a barista."

"That's alright," Zander smiles. "It's college. You don't have to know what you wanna do for the rest of your life. Oh, this is me." He points at a small house to their right with large windows.

Robbie brightens. "My house is actually a block away. We live pretty close together."

"Well, I hope that means we'll be seeing more of each other, Robbie SquarePants," Zander laughs. He opens his front door gently. Waiting for them on the foyer is Gertrude, furry and pleased and mewling. 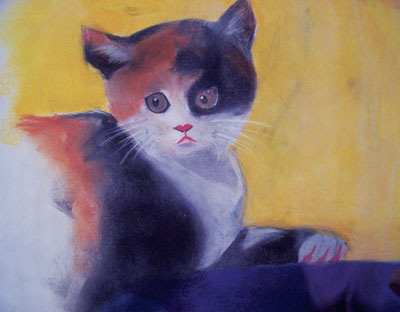 My take on a human, gender-swapped version of SpongeBob SquarePants set on a college campus.