For Christmas last year my dear parents got me this diary to express my feelings into. Not noticed to them though, you’re probably the only soul on the planet who’ll actually listen to me. Let me explain.
I suppose I should tell you about my family first. Well, I have a mother, Sue, a father, Tom, an older sister and brother, Stelsey and Juniour, and a younger brother, Teddy. My sweet mother has an undiagnosed case of OCD. Everything must be perfect for her: her short blonde bob, her carefully creased blouse, and slacks, her make-up applied each and every day at 6 am to give her a “natural beauty” effect. And that’s only her image! The house has looked the same ever since Teddy joined the family. The spacious lounge room, with its pastel yellow walls and white leather lounge suite. Over the years the alphabetically ordered by director’s surname DVD collection has increased and the magazine on the mahogany coffee table has been updated but otherwise all is the same. The only changes in the kitchen are the dining set (which replaced our first one due to its destroying by Teddy and a hammer) and the photos hanging on the pastel green walls. Mum seems to really like pastel colours. Both bathrooms have pastel pink tiles and hers and Tom’s bedroom is pastel purple. The only rooms that haven’t been contaminated by the pastel outbreak are mine, Junior’s and Stelsey’s. Teddy enjoys his pastel blue so much that he’s based the colour scheme of his room around it. Poor kid, I feel sorry for him.
Anyway, enough about my obsessive mother, she’s a treat compared to Tom. It’s like he’s having a permanent midlife crisis. Ugh! You don’t know how embarrassing it is when he shows up at school at the end of the day in a lime green minivan blasting old rock music or something wearing red tinted shades, cut off denim shorts and no shirt. And when he is wearing a shirt, it’s no better! It’s generally a tighter than tight, bright-coloured tank top. AHH! Scary much?
Moving on to my delusional siblings. Stelsey and Junior are twins. They’re meant to be in year 10 this year but I seriously think that Junior is considering dropping out. Not that school does him any good anyway. He never does his homework…or works at school matter-of-fact. His always getting bad reports sent home. It’s not that he’s not smart of anything, he’s quite a know-it-all. It’s just that whenever he’s at school he sits with his geeky little friends discussing game tactics for some stupid MMORPG and whenever he’s at home, he’s online putting those tactics to use. He tried explaining it to me once but, to be honest, I had no clue what he was on about.
And then there’s Stelsey, his evil twin. Stelsey is as evil as is possible for a human being. I know that her only reason for staying in school is to recruit more followers. She’s into the whole witch thing. Considers herself one and practices magic or whatever whenever she can. Her wardrobe consists of baggy, black, torn clothing and big, black, pointed leather books. She also favours a floppy witches’ hat and a black cloak that she wears whenever leaving the house. She tried to convert Teddy once but as soon as he saw all the glass vials he smashed a bunch, causing Stelsey to pull him out of her room by the ear and craft a voodoo dummy. Whenever they’re not at school both Junior and Stelsey are pretty much in their rooms, gaming or coming up with new fake spells. I can’t imagine what it’d be like if they were made into one, not two. The most boring evil super villain ever! Maybe I should make a comic. Hehe “The Adventures of Whiz Witch!” I bet they’d like that.
Moving on to my destructive little brother. Teddy is a year younger than me but doesn’t act like it at all. He thinks he’s “top dog” in the house but he’s way to immature to ever pull it off. He might’ve actually got away with it if it weren’t for his bad habit of smashing things…or burning things…or chopping them up. He used to only do it when he was angry but now he does it for fun. Oh well, I ‘spose I should be grateful it’s not me his killing.
Me. I suppose that’s what I should tell you about next. Well I’m not like wacky witch Stelsey, or gaming geek Junior, and I’m nothing like destructive Teddy. I’m not anything really, I’m just plain old me. Well I’m not really that old, haha, I’m only thirteen! Umm…I’m in year 8, my favourite colour is purple, I’ve always wanted a pet turtle (next Christmas much? Haha no they’ll probably get me a replacement for you). And I have this one best friend called Kate. But I’ll tell you about her tomorrow. This is probably the most I’ve ever written at once so I’m gonna go for now. Mum’s calling us for lunch anyway. Yep, it’s directly 12:58.
Okay, see you tomorrow!
Lia 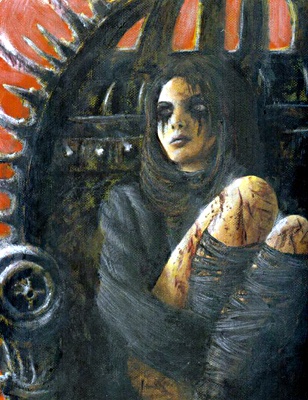 The author's comments:
This is the first entry in my book currently entitled "Dear Diary". i am slowly making progress with 2.25 chapters under my belt, but, to be fair, i've been working on other things too :)
Post a comment
Submit your own