Hoots and hollers. Whistles. Crude comments. That is all Veronica would hear when she would cross the intersecion of Mayberry and Colerain on her way to school every morning. They were builiding a new mall, so there were many new construction workers on the street. And as she walked to school, disgusting comments filled her head and tormented her to the very core. The old skeevy men would yell at her, whistle as she walked by, and some even made kissy faces like they were still cavemen seeing a female for the first time. But calling these guys cavemen would be an insult to the actual cavemen. A man who lives in a cliff would be a step up from these jerks.

"Hey baby, I can teach you a few things you'll never learn from those books your carrying" was one genius comment made from a guy who had more missing teeth than a hockey player. Veronica would just keep her head low and walk by as fast as she could.

Couldn't they see she was only 17? Didn't they care that they were old enough to be her dad? How would they feel if someone talked to thier daughter like that? But Veronica would quickly brush away that thought. It reminded her that these men may have actually pro-created, and that was a terrifying thought in itself.

It's not like Veronica was a runway model. She was medium-cute if anything. She had dull brown hair, a slender body, her wardrobe consisted of jeans and hoodies, and if the mood struck, she would throw on some 99 cent lip gloss. So what did these men freak out over her about? Was the sight of a decent looking girl so amazing compared to what they mostly likely went home to at night? Or did they get some sort of sick satisfaction out of making a teen girl feel disgusting and dirty? Either way, Veronica was not putting up with it today.

She asked her mother to call the school and tell them she was going to be late. She would start to walk to school when she saw the men leave for thier lunch break. So around noon she decided it was safe enough to leave. There was only one man still on the job site, and he looked decent enough. As she walked by the constuction site, she noticed how young he was. Probably around 24 or 25. He was cute too. Had a nice smile, dark curly hair, and hadn't said one rude comment to her at all. She even looked over at him and smiled. He smiled back and started to say something to her as she started to walk across the street. "Hey!" He said to her. "Hey hun!" Veronica couldn't believe it. Even this nice looking guy was just as crude as the others, trying to hit on a teenage girl. He ran over to her and tried to grab her arm. She hit him and ran. Veronica was almost across the street when she was hit by a car. She died on impact. The man was only trying to tell her to not cross because a truck was coming. 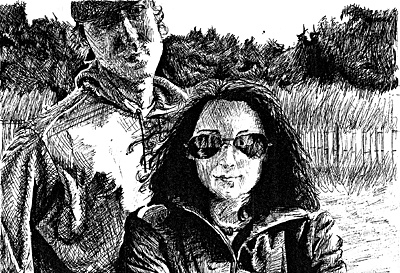 View profile
Fiction
It's Over
By Anonymous