I could just see the insults building up behind critical lips. His sharp teeth biting his tongue so as to not let them slip. Vicious blue eyes scorched my skin as they scanned my attire, eyebrows furrowed in an attempt to hold back a smirk.

And there he stood, as if he were royalty. As if his Calvin Klein jeans were more important than the plastic cross I wore around my neck. As if I was privileged to meet him – like he was doing me a favor.

If I had walked past him on the street, I probably wouldn't have noticed him. He was nothing special – mid-thirties, clean-shaven, black shoes so polished that he could check his reflection in case he had forgotten what he looked like. He looked at my brown suede flats from Costco as if they weren't even fit for his girlfriend's chihuahua.

And my clammy, shaking hand gave him the now-crinkled résumé that I had spent hours perfecting, even though I knew it didn't matter what was on there. First impressions were everything. And I was clearly nothing.

As he scanned my résumé, I felt his cruel eyes rip through it like a chainsaw, tearing my accomplishments to shreds. My entire being on a piece of paper – to him it was clearly garbage.

Of course, I never expected to be standing here, surrounded by green Styrofoam cups filled to the brim with headaches. But the way the economy was going, I was lucky to have found this opening. I really shouldn't say lucky, because at this moment, and for the past five minutes, I felt anything but lucky.

Standing in front of him, I felt under-dressed, under-achieving, and under-privileged. I couldn't even afford to buy what he sold, let alone what he wore. His smile alone probably cost $300 to perfect.

Perfect. What a funny word. Pronounced another way you get “perfect.” If one is always perfecting, one can never be perfect, right?

Maybe I like being un-perfect. Maybe I like my unruly dirty blonde hair. My braces and white, un-tanned skin. Maybe I don't like coffee and don't care to know what the hell a mocha frappuccino is.

And he could sense this in my demeanor. How I was a small fish in a big pond. But I felt like a big fish in a small pond. A small pond that was so selective that it only wanted identical rainbow fish. Clearly a whale would not fit.

But whales are much cooler anyway.

So maybe I had given up trying to impress him. Maybe it had been 10 minutes and we both hadn't said a word, but maybe it was better that way. Because if his eyes told me I was a loser, his voice wouldn't come up with anything better.

So finally, after what seemed like an hour, he handed back my résumé, clearly amused by the fact that I had dared to enter his sacred sanctuary of pretentious customers and overpriced caffeine.

There was no point in objecting; he had already beaten down my self-confidence, so it was a wise choice to leave with my dignity.

Guess I'm not getting that job at Starbucks. 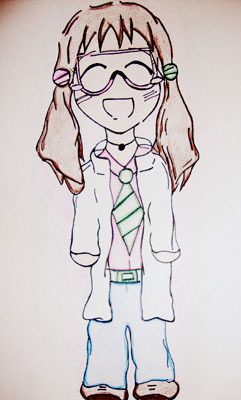 The author's comments:
My friend worked at Starbucks, and my brother currently works there, and I just think the whole idea of the store is cliché so I decided to poke some fun at it.
Post a comment
Submit your own

Favorite Quote:
“Imagining isn't perfect. You can't get all the way inside someone else...But imagining being someone else, or the world being something else, is the only way in. It is the machine that kills fascists.”
― John Green, Paper Towns

View profile
OMG I LOVE MOCHA FRAPPS
Deliah GOLD said...
on Jul. 31 2012 at 11:10 am
Deliah GOLD, Narnia, Other
10 articles 0 photos 17 comments
View profile
Amazing! From the beginning, I was hooked. You have a clear gift for descriptions, and the part about the whales gives the reader insight into how you have thoughts of your own that are a cut above the rest. I like Starbucks personally, but this story was a lot of fun and is on-point with its humor.
IamtheshyStargirl PLATINUM said...
on Jul. 26 2010 at 10:43 am
IamtheshyStargirl PLATINUM, Lothlorien, Utah
44 articles 16 photos 2206 comments

Amazing, your descriptions are so vivid :)

I could have sworn I've read this before, or something quite like it, maybe I have? Oh well, I could just chalk it up to a random case of Deja vu.

Thanks for writing this, mind if I say you're a gift to the world? Afterall, you could say that we're all gifts to the world. It's just that some of us know how to better present ourselves.