The long black hand slowly ticked. Again and again, methodically, never missing a beat. It was an older version, still keeping the steady movements that had driven many men to the brink of insanity and beyond. Never would it slowly glide like the others he had seen. At least those gave the impression of speed. No, this one, with its white face and small numbers, hung on the wall as a permanent reminder of his confinement.

His eyes moved downward from the clock to his desk. He examined the scribbles and drawings. Nothing to rival Michelangelo or Picasso, but the chicken with a television for a head did make him think. The color of the desk repulsed him. Not white, not tan, but a dirty mix of both, hidden away in the secret location where colors are made. This one never appeared on a bright color spectrum. It was the ugly cousin to white. That’s without mentioning the extensive phonebook of phone numbers, proclamations of teenage love, and marks of boredom and anger.

His desk was one in a row of five, all the wall in the back. There were four others like his lining the back wall, making twenty inmates in the whole room. Each was unique, yet so similar. Heads tilted at an angle, leaning on a hand, arm, or the back of the chair. Eyes opened and closed. He thought he saw a spark of enthusiasm and interest, but only a sneeze came out of it.

The window was shut tight. Legends told of those who attempted to break free of the building through the windows. Like portals to a different dimension, the windows gave them a picture of what could be when we were finally released. Today, a gray sky matched the internal atmosphere of the mass confinement.

There was a voice coming from the front of the room. It has been the same for a half an hour, although no one would be able to give a description of what was said. Oblivious, the owner of the voice continued on. A larger body blocked his view of the speaker, but he knew it was a male. He could give you his last name, but that’s about it. Little attention had been paid to the speaker in the past few weeks. The sentiments were returned to him.

The tick of the clock, the scratching on the desk, the low hum of the instructor’s voice. A rhythm developed, steady and secure. Over and over, again and again, always unchanging. His head swayed, his eyelids lowered, and the room faded into a welcoming darkness.

His head shot upright. There was movement around him. He raised his head a few inches to see the large mass that had been sitting in front of him exit his seat. The figure at the front of the room sat at his desk, facing away.

It was time. He slid out of his seat and exited through the doors. Scheduled movements were in place. Repeated day after they, a mechanical feel enveloped the dark halls. Dim lights cast shadows in the nooks, where nefarious activities were commonplace. He moved into the wave of people, each with a destination that had been chosen months before. As if he had any choice in the matter. He passed the entrance. A thought passed through his mind. Maybe even less than a thought. Something brief, spontaneous. Instantaneous, he would come to call it. He exited the long and coordinated lines of confined minds and bodies. He walked, eyes slightly elevated, towards the gates. He put his hand on the right side. Nothing happened. Pushing slowly, no one seemed to notice (or care) about the squeaking sound. Step by step he made he way out of the compound. The wind bit at his face, but it was a pain he endured. His fingers were called and his face feeling numb. But it was real. The pain was real, the discomfort a sign of his sanity. He spun around, once, then twice. The world was around he. We savored in the freedom. He relished it for twelve more hours, upon when he was to return to detainment once more. Education, he muttered, what a joke. 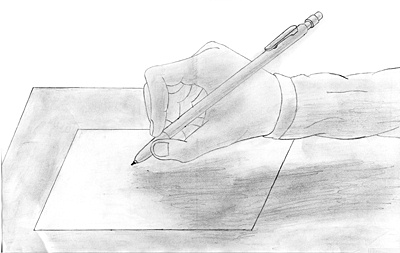