It's You and Me Kid | Teen Ink

It's You and Me Kid

Over at Hope's Orphanage, all of the children and faculty were sound asleep in their beds -all except for Johnny Knight of course. He sat quietly in the orphanage's cafeteria drawing on his sketch pad, his dirty blond hair falling in his face as he drew. Even though he knew that 8pm was officially lights out for everyone, he would continue to stay up after hours anyways. That was the thing with Johnny; he was a rule breaker. As he sat there drawing a sketch of an eagle, he started to hear distant moaning sounds.
"What the?" Leaving his sketch pad on the table, he went to go see where the noises were coming from. He followed the sound all the way into the girl's sleeping quarters. Without knocking, he entered the room and walked down the isle of beds. He stopped at the last bed on the right side of the room and kneeled down beside it. His sister lay on her side, clutching her stomach in tears
"Johnny..." she said in a whisper.
"What's wrong sprout? Why are you crying and making sounds like a dying whale?"
Her light blue eyes seemed to sparkle as she smiled up at him. "Don't try to make me laugh right now."
"Okay, but tell me what's wrong," he said, gently removing a stray strand of blond hair from her face.
"I don't know, my stomach just started hurting really bad. It like there's someone squeezing it from the inside or something."
"Let me see," he said, placing the back of his hand on her forehead. "Well I don't think you have a temperature and it can't be food poisoning because we all had the same thing for breakfast and lunch and I don't feel sick."
She looked into her brother's equally blue eyes pleadingly, "But my stomach really really hurts."
"Maybe you just have to poop or something. Come on, I'll walk you to the bathroom."

As she pulled the covers back and stepped out of bed, he could see a large red stain on her sheets. He shook his head and then left the room. "I'll be right back Mary, just wait right there," he said before leaving. She sat back down on her bed but quickly jumped up when she noticed the wetness. Confused, she stood there waiting. In just a few short minutes, her brother returned carrying two large coats and a set of keys. He handed her the largest of the coats and told her to put it on.
"Are we going somewhere?" she asked.
"Yup, we're going to take a little trip to Walgreens. Put your shoes on."
Her mouth dropped. "Johnny we're not allowed to leave the building after lights out."
"Relax, it's just up the street, plus we won't be too long." He gave her a comforting smile and held out his hand. "Have I ever mislead you?" She thought it over for a few seconds then shrugged and took his hand. They tip-toed out of the building and made their way towards the Walgreens. Halfway there, Mary's stomach started to hurt again so he had to carry her on his back the rest of the way. They got there just a few minutes before closing time. Still carrying her, he walked down the aisles in the women's section until he found what he was looking for.
He set her down on her feet and pointed to the shelves in front of them. "Okay take your pick: pads or tampons? I'm only buying one so choose wisely."
"Wait what?"
"Alright pads it is." He picked up a random pack then grabbed a small box labeled Ibuprofen. The clerk was a young girl, probably around Johnny's age. Lazily, she scanned the pads and then the box of Ibuprofen.
"Are you over the age of 18 or have a legal guardian present with you?" the clerk asked.
The two looked at each other. " Um, I'm 15 and we live in an orphanage."
"Close enough. Your total is $15.45. " She placed the items in a bag and handed him a receipt along with his change.

Before they headed home, he bought her a Sierra Mist from a nearby soda machine and had her take two of the pills. On the way back, he started humming a playful tune.
"What are you humming this time?"
He gave her a playful look. "Guess." He continued to hum a little louder this time.
"It just takes some time, little girl, you're in the middle of the ride. Everything, everything, will be just fine. Everything, everything, will be alright, alright. It's Jimmy Eats World -The Middle."
"Ding!Ding!Ding! We have a winner!" He threw his arm around her in a loose hug. "Mom and Dad always said you were the smart one." She leaned into his hug and they continued to walk home.
"Hey Johnny?'
"Yes Mary?"
"It's okay to miss them sometimes."
He tightened his hug around her and kissed the top of her head. "I know sprout, that's what I have you for."
"Yeah, I love you too." 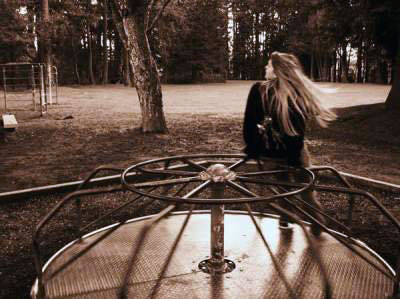