Favorite Quote:
- I stare danger in the face and giggle
- Never argue with an idiot, people might not know the difference
-R.A.P (Retards Attempting Poetry)
-Tip Cologne ryhmes with alone

“Why does time have to move so fast? One minute I’m two-years-old lying down for a nap and when I wake up I’m eight playing outside with my friends. Now I’m sixteen wishing I was eight-years-old again. Knowing that when I’m eighty-six that my words will just a forgotten memory,” James Hawthorne mumbled to himself, barely noticing the people around him. He sat in the cold seat that he would have to sit in for the next semester. His head was propped against his clammy palm. He almost forgotten about the middle-aged woman with a cloud of gray hair standing in front of the class.

“Excuse me,” a soft voice whispered loudly. James ignored it, thinking it was for the person sitting in front of him. “Excuse me,” the voice said again. James’s head rolled up to see a short, bony girl with ivory skin and curly black hair looking right at him with her dark brown eyes. She wore a green and white striped shirt and faded jeans. “This is my seat.”

“This is my seat,” the girl said again, pointing at the desk.

“It is?” James’s hands clutched his camouflage backpack as he got up.

“Thanks,” the girl smiled a half smile, showing him her slightly crooked teeth.

James stood beside her now, finally seeing how short she really was. “What’s your name?”

James ducked. His hair and shirt matted with sweat. He couldn’t see anything but black. He couldn’t even see his hands that clutched his shotgun. He shot blindly around him, hoping he at least hit the enemy.

Beside him stood Dylan, both of them panted with perfect rhythm. “So newbie,” James whispered between pants, turning to where he thought Dylan was standing. “Got a family back home?”

“Just a girlfriend, we’ve been going out for two years now,” Dylan said with his rough voice. “What about you? Do you have a family back where you came from?”

“Yeah I do. We got married right out of college. I didn’t plan on it until we were seniors in high school, it was back then that I realized I loved her,” James said truthfully.

“How do you live with this?” Dylan asked out of frustration as he shot blindly.

“Don’t yell,” she whispered panicky, walking to where James stood fidgeting with his black duffle bag. “If you wake up Gabby… I promise if you wake up that baby…” Megan trailed off, just noticing her husband standing there in his army uniform. “Are you leaving now?”

James nodded once. “I left the letters in the basement just incase I-”

“No you are coming back.”

“No you’re coming back. Do you hear me James Hawthorne?”

James sighed, deciding not to argue with her. Instead, he pulled her into a hug. His hand smothering her cape of curly midnight colored hair. “Goodbye,” he whispered just loud enough for her to hear.

“I think I’ll go see if Gabby isn’t just pretending to be asleep,” she said, holding back tears.

“Hey James?” Dylan cleared his throat. “Got any kids?” He asked, trying to keep the conversation going.

James smiled thinking about the now three-year-old Gabby. “Yeah, yeah I do. I haven’t seen her since she was a baby though.”

James shot blindly once again into the darkness. He didn’t even notice when a fresh bullet came hurtling towards him. He didn’t feel the blood dripping over his uniform. It didn’t even hurt.

Megan’s hands twitched into one giant fist. She couldn’t even look at the man standing in front of her. “Mrs. Hawthorne, I’m sorry.” He said, surprisingly with real emotion.

“My name is Dylan,” he went on as politely and smoothly as he could. “I’m so sorry but your husband-”

“No,” Megan shook her head, not even trying to hold the tears back.

“I’m sorry,” Dylan breathed with a broken voice. “He wanted me to give this to you,” he said, handing her a small white slip of paper he hid inside his right pocket. She looked at it with red, puffy eyes and read…

Dylan ran towards his friend. James was lying on the cold grass, blood pouring out of his body like water out of a faucet. The nearby helicopter gave him enough light to see him. “James,” he panted.

“Do you mind doing me a small favor?” James went on, his voice nothing but a weak and broken whisper.

“Tell Megan to tell Gabby why times moves so fast…”

‘…One minute I’m two-years-old lying down for a nap and when I wake up I’m eight playing outside with my friends. Then I was sixteen wishing I was eight-years-old again. Knowing that when I turn eighty-six my words will just a forgotten memory.’

Megan read it repeatedly with the distant sound of a helicopter ringing inside her ears. 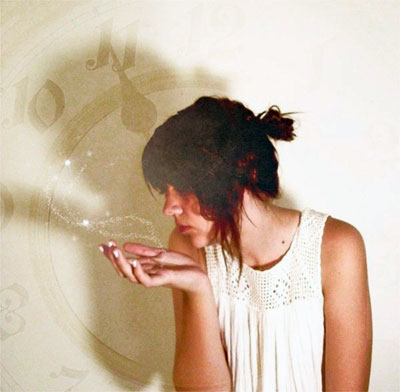 The author's comments:
Something I put together in about ten minutes, hope it isn't too bad.
Post a comment
Submit your own

View profile
Wow. I love how much you can make someone feel even with such purposely stunted dialogue. Your style is brilliant and I wish you could elaborate but still keep your mystery. I want to know more, but at the same time I don't. Amazing!
Eshshah PLATINUM said...
on Oct. 11 2011 at 7:31 am
Eshshah PLATINUM, Galloway, New Jersey
32 articles 31 photos 239 comments

Favorite Quote:
"The woods are lovely, dark and deep. But I have promises to keep, and miles to go before I sleep." -Robert Frost

View profile
this is great! I love the dialogue!