I couldn’t try on the dresses. Not with that image in the mirror being reflected back to me. Maybe in my room in Chicago, where the mirror has been safely tucked away in my closet for two years now. Maybe even in my room back at Pappy’s house, where I could turn around or close my eyes. But not here. Not in this cramped space with mirrors on all four walls.

“Scarlet, are you sure you’re okay in there?”

These mirrors that revealed the truth that I couldn’t admit to even my best friend. These mirrors that contained all the knowledge and skeletons that I had long ago packed up into boxes and stored in the attic of my mind. The image burned my eyes. It abducted me. It squeezed into my sockets and tugged and pulled and made my stomach twist in a way that was beyond the pain of hunger.

“Scarlet, if you don’t answer me I’m coming in.”

I tried to answer, to formulate a response. To pull my tongue out from the back of my mouth. To take my eyes away from the image in the mirror. To make my brain stop analyzing every feature of my body until it makes me so sick that I could throw up. Until it brings me to a breaking point where I just have to throw up because it’s the only way to rid myself of all the waste and guilt and garbage weighing me down.

Heavy is all I’ve ever been. Heavy from food. Heavy from undigested grief and frustration. Heavy from stress and hurt and anger and regret and confusion. All I want to be is light. The void brings a satisfaction that fills me up enough to get through the day. Full of happiness. Full of freedom. Full of peace. And most of all, full of emptiness.

The curtain to the dressing room was ripped open and Olivia came in.

“Scarlet, you’re not even --” she started, but the words left her mouth. I watched in a stony silence as her eyes registered what she saw. I was a piece of paper: pale and one-dimensional. That’s all.

“Scarlet?” Her eyes wavered. “Oh my God.” Olivia bit her lip and stared at the floor, avoiding my general direction altogether. “Oh my God,” she repeated.

“What?” I asked softly

I waited for her to think of the right word. Unhealthy. Scary. Ugly. Too skinny. Anorexic. Not good enough.

I looked at my reflection. The insults were still circulating.

“Don’t you know that you don’t need to do this to yourself?”

She sat down against one of the mirrors. “It all makes sense now. Not eating ice cream or Frosted Flakes, or drinking beer. And it’s why I see you running every morning before it’s even light out.”

“Just because I don’t eat junk food and I exercise doesn’t mean I have an eating disorder.”

Olivia said my name again and I looked up.

“Look in the mirror. Does it scare you?”

“Because I know I could be much skinnier.” I paused. “I know there’s more I can get rid of.”

“But Scarlet, when you look at yourself in the mirror, you’re just looking. You’re not seeing.”

“When I look at you, a lifeless girl stares back. A girl who probably weighs 85 pounds at most. A girl with pale skin and ribs that show and bones that stick out. A girl who is sick. But when I see you, I see a beautiful person. I see someone who is scared and insecure and going through something that I wouldn’t wish on anyone, but she’s still beautiful. She’s still a good person, and she still deserves a life. Don’t you think she deserves a life?”

“Because that’s what you’re doing, Scarlet. You’re taking her life away. Little by little.”

I let my head fall into my hands as I tried to will the tears to stop.

“I know you’re strong. You can save your life.”

I picked my head up and saw a girl staring back at me. I searched for the beautiful person that I so wished was there. I saw the girl’s stringy hair, her cheekbones that could slice an apple, her teeth that were too big for her face, her shoulders that stuck out like a football player’s, her breasts that were almost nonexistent, and her ribs that showed, like a jail cell imprisoning her entire body.

“I’m going to a treatment center in Boston. They say it’s the best.”

Something in her eyes clicked as she came to this realization. For the first time all morning, she smiled. “Really?”
I nodded.
“I’m so proud of you, Scarlet. I knew you were strong enough.”

I tried to smile back.

“Let’s get out of here; this dressing room is starting to depress me.”

I nodded in agreement.

Olivia started to leave, but turned around and hugged me so tightly I thought she was going to shatter my bones. “I’ll be praying for you,” she whispered.

I hugged her back as I squeezed my eyes shut to let a few tears escape. They crawled down my cheeks and settled on the corners of my mouth. I shoved the lie to the back of my mind, where it joined all the other skeletons that I would never allow to resurface. 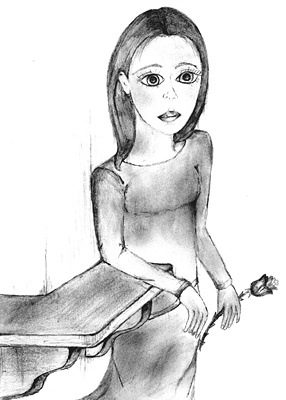