"Don't Spoil The Tablecloth": The Confessions Of A Grinch | Teen Ink

"Don't Spoil The Tablecloth": The Confessions Of A Grinch MAG

This year, my mother said something to us all that, in my mind, epitomized the true spirit of a modern Christmas. It was: “Don’t spoil the tablecloth.”

While holidaying, my parents bought an elaborate hand-painted tablecloth at great expense. It’s rather too elaborate and expensive for everyday use, so it gets hauled out, rather like the Queen, for special occasions. And on such occasions we’re told to preserve – at all costs – its lily-white magnificence. This seems to me to be a perfect metaphor for the festival of Christmas itself – a sacred tablecloth of togetherness – and anything that spoils it is known as a spoilsport and a grinch forever after.

It’s a shameful thing to confess, but in the interest of full disclosure, I absolutely despise every relative outside my immediate family. Sadly, at Christmas, a “get-together” with the grandparents is compulsory, and I have to put up, shut up, and try to defend myself against as much psychological damage as I can. Predictably, the maternals spend most of the day discussing the cousins (whom we haven’t seen for five years due to the Great Family Schism) and how they are smarter, wealthier, and more attractive to the opposite sex than my brother and me. The paternal rises above such petty provocation, choosing instead to get drunk on champagne and to bask in the all-encompassing radiance of her own narcissism. At one point she regains enough control to say, with no trace of irony: “Are you enjoying Christmas then, dear?” “Yes,” I should have replied, and perhaps would have if I hadn’t been so worried about throwing the tablecloth out of kilter. “If bloating myself on stodgy foods, drowning in a sea of rank materialism, and having to endure your company counts as enjoyment to you,” I add.

The enforced jollity, it has to be said, also annoys me. There’s nothing more bizarre and abnormal than making happiness compulsory – but at Christmas, it is. It’s excessively tiresome to be constantly told to be “merry,” just in case my Overwhelming Joy-ometer dips below three billion. For the past couple of Christmases I have taken to debunking such norms by wearing Addams-esque attire, defacing the decorations, and violently fainting on the floor, but alas – my pitiful efforts go unnoticed. Christmas movies, and my family’s choice thereof, are indicative of this. Predictably, they reject “Edward Scissorhands” (a sensitive parable involving the quasi-psychotic rejection of anything that doesn’t have a big phony smile on its face) and opt instead for the altogether more palatable “The Smurfs” movie (loss of will to live, optional). Yet far and away the worst part of the whole affair is, without doubt, the music. Here at least (thanks to a Google search) I know I have some allies. My relationship with the Beatles is rocky at the best of times, so hearing Ringo Starr at this point does nothing to improve my mood. Thirty seconds into the song I’m already at the “…You say goodbye, and I say good riddance …” stage. And that’s just one of many. Why is it that we’re forced to listen to such nauseating garbage every December? I mean when would you ever choose to concurrently listen to Bing Crosby, Cliff Richard and George Michael? Never. And worst of all, in my book, is the utterly unfunny and more than a little perverse “I Saw Mommy Kissing Santa Claus.” It’s like some kind of obscene fantasy for old men at Christmas.

Ladies and gentleman of the jury, I have nothing more to add. But every dog has his day, as they say, and mine comes at around 8.30 p.m. While eating everything people are supposed to eat on the 26th with a fridge full of leftovers and a single-minded determination to consume them before, God forbid, any go bad, the long-awaited and perhaps inevitable happens. My 10-year-old brother, whose hand-eye coordination after 12 solid hours of playing shoot-’em-ups on his new Xbox is not what it should be, pours a glassful of sticky, luridly-colored fizz all over the tablecloth. There’s a hush, during which everybody stares at the spreading stain in a sort of appalled fascination.

“Well, I think we can safely say, ladies and gentlemen, that the tablecloth has officially been spoiled.” Rise, grinches, rise! 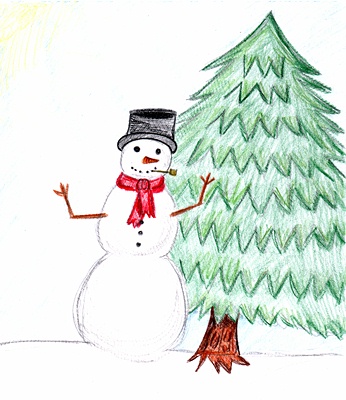 I wrote this piece as a witty, satirical sideswipe at Christmas. Everyone is expected to be happy, no matter what their true feelings are, so I adopted the point of view of a notorious grinch and Christmas-hater. All characters portrayed are entirely fictional.

Favorite Quote:
“Being deeply loved by someone gives you strength, while loving someone deeply gives you courage.” By Tzu

Favorite Quote:
They say that a picture is worth 1000 words. What they don't say is that 1000 words are worth a world.

View profile
I have never laughed so much while reading something I don't agree with… I know it's a weird one, but it's meant to be a compliment. Your writing is so colorful and funny, I wanted the article to be endless!!