They’re coming! I can see their great shadows spread across the sand and I hear the scurrying of the other animals around me. I glance up at the sky to see the creatures that have forever been the fear of the land; the raptors that visit every day to snatch away a life.

I scurry under the nearest bush and put my ears down to avoid being seen. I’m sure it will work, nothing can see me from the top of a saguaro cactus; not even a hawk. I can see two of them sitting way up at the top of the cactus, searching the ground for the signs of prey. They can’t see me here, of course; not under this bush.

Then I hear them; the younger ones; the hawks that hatched last year and have grown strong under their parents’ care. They stalk along the desert sand; spreading their wings and jumping up and down in a very frightening manner. I see a few of my fellow creatures stir in their hiding places, clearly frightened by the gesture, but they do not run. I must control myself, the hawk cannot reach me when I am under the bush. The young hawk turns my direction and begins walking toward my hiding spot. My heart begins to race and my breathing quickens. He’s going to find me; he’s going to get me! I have to run! Every muscle in my body is trying to run the opposite direction, but my mind stands firm.

Or not! The hawk spreads its wings and releases a loud screech as I run from my hiding place into the open area. I hear a responding screech from above as another joins the chase. The humongous shadow appears over me and I turn to my left as the claws grab the earth where I had just been running. I see to cacti ahead; mere inches apart. The gap is big enough for me to squeeze through, but not for the hawk with her long wingspan. I jump through, a needle leaving a scratch in my side, and continue to run as I wait for the thud of the hawk hitting the cactus; but no such sound reaches my ears. I turn my head slightly and see the large claw of the raptor just above me.
I am a fool, I have begun running towards the sun, protecting the beast’s shadow from my eyes. I attempt to turn away from the sun again but the long claws sink into my side, releasing a pain that I have never met before. It ravages my body, which has now gone limp with shock as I rise into the air towards their cactus-top nest.
This is the end. 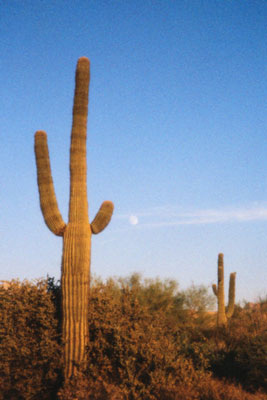 The author's comments:
I was inspired to write this piece by the series "North America" on T.V.
I will be regularly posting stories like this to expose the dark side of nature.
Post a comment
Submit your own