“Why, Mommy?” Linda asked, “Why would you want to go to the bank?” I didn’t know if my idea would work, I didn’t want to tell anyone, I wouldn’t want to disappoint them.
“Liz” I said, “Do you mind following me outside for a minute?” Liz left the table, patting
Linda on the head on her way out. We shut the door behind us, and started to whisper.

“I have an idea, Liz and I’m not sure if it’s going to work. It is an extremely optimistic idea, and I could have been absolutely insane for even thinking it, but I knew that if Jonas was here, he would have encouraged me to take the chance.

“I have to go, Liz. Wish me luck.” I ran four blocks all the way down to city bank, to see Margie Anderson, an old friend of mine about to lock the door.

“Please, Margie it really can’t wait.” Margie shot my a sympathetic look, out of her thick pink and rhinestone glasses,
“Okay, fine. But just for five minutes!” Margie started to turn the lock the other way, and let me in. I ran straight upstairs to Donald Barrymore’s office. Barrymore was the head banker in Littlewood, he has never been married, never had a family, and was notorious for being quite a hostile man.
“Mr. Barrymore!” I banged on the door, “Mr. Barrymore! Please answer, it’s Hannah, Hannah Meyers.”
Barrymore, the old crooked man opened the door, gesturing me to come in. Which had been shocking to me considering he had never been kind to me, he wasn’t known for being a warm and gentle man. He grabbed his pocket watch from the chain and examined the time.

“Are you aware, Mrs. Meyers that this bank closes at six thirty, every single day. And that you showing up at this hour is a very large imposition.” Mr. Barrymore was a traditional man. He believed in organization and structure, he needed to come out of the eighteen hundreds.
“Yes, but Mr.-“
“However,” He interrupted, “Even I can make an exception, once in a while.”
“Thank you Mr. Barrymore,” I pleaded. “I was wondering if I can take out a loan for two
hundred and fifty dollars..”

“You, know.” He interrupted again with his old quaking voice, “Two hundred and fifty dollars is a great deal of money.”

“Yes I am aware of this Mr. Barrymore, but I have good reasoning and I will be sure to pay it back, whether my idea works or not.”

Barrymore pondered, and looked at my dubiously, he took his one eyeglass out of his eye, and put it in his pocket. He rubbed his hands together, and looked up and me. He left the table and walked into a small room. I could feel my pulse increasing by the second. My heart was pounding and my palms were sweaty.

Mr. Barrymore re-entered the room with a small envelope.

“Don’t tell anyone.” He said, “I wouldn’t want word to get out that I actually do have a heart.” Mr. Barrymore smiled, amiably and wished me luck.

I ran all the way home to find Liz sitting on the couch, reading the children a story. Linda was half asleep and Lauren was teaching Arnold how to tie his tie.

“Lauren, would you mind carrying Linda to her room?” Lauren picked her up and I kissed all of my children good night. Before I had told Linda the news, I made sure, they were upstairs.
“Liz” I said, “I have an idea.”
“I am aware of that, now I would like to know what it is!”
“Before I tell you, there is one more thing I need to do.” I ran upstairs to my room
and I could hear Liz yelling,
“Hannah don’t do this to me! You’re going to have to tell me eventually!” She bellowed from the couch.
I went straight to my room, and lay on the bed grabbing the phone. I grabbed Walter’s business card out of my pocket
“Hello Mr. George,” I said cheerfully, “Thank you for the offer, but I am afraid I am not going to take you up on it.”
Walter insisted, “Thank you” I said, “But no thank you.”
I heard Liz come up the stairs, and I pretended to fall asleep on my bed, because I did not feel like explaining my plan to her. I was not up for any pessimism, and I especially did not want to hear it from my practical little sister, Liz.
Next morning I woke up with the sun. It was only five o’clock and I was hoping I could make it to the lumber store without anyone noticing I was gone.
“Ten sheets of lumber, please.” I slapped the order down on the counter right in front of Tommy Barker, who I had known since I was a child.
“Ten sheets? What could you possibly be doing with ten sheets?” Tommy joked, “Ah, I’m just kidding, how are you doing Hannah?”
“I am well, Tommy, thank you.” I responded, “Do you think you could delivery the lumber to my yard around seven thirty.”
Tommy didn’t asked questions, “Sure” he responded.
When I arrived home everyone had been sleeping. I waited patiently for the lumber to come. Time stood still. It was seven twenty nine for about an hour, until finally I heard the knocking on the door.”
Running to the door, I handed the three men my blue prints of the small house that I wanted to build, “No windows. One door. I am making a museum in my back yard, and I don’t want anything going missing.” I had said.
“Yes ma’am.”
Three Hours later Linda, Lauren, Arnold, and Liz came pouring downstairs. I had my cu
of coffee in my hand, and I was looking out the window.

“Mommy, what are they building?” Linda asked. All four of them had no idea what was going on, I almost felt guilty for not asking them for their consent. After all, I had to act fast and in this state of tragedy I had only wanted the best for my children.

“They’re building a museum, that we will hang all of Daddy’s paintings in, and charge people to come see. That way we can see the paintings any time we want, and we can still make enough money to get by.” I had even astonished myself, so I was not surprised when my three kids and little sister were mesmerized with my brilliance.

“Wow.” Liz had said, “I’m almost jealous that I didn’t think of that.” I laughed.

“There is one thing you guys can do for me” I said aloud, “You can make signs saying that the art exhibit will be open tomorrow from eleven until five and the admission ticket will be eight dollars per person.”

I had made a vouch to myself that I would go see him every single night, but tonight was different from all other nights, I had seen signs for the Museum blanketed everywhere, on trees, cars, peoples houses. I had wondered what people were saying about my experiment. After all, it couldn’t hurt.

The gate was already open, and I had walked straight to where Jonas’s tombstone is.

“Jonas.” I said, “We miss you so much. I didn’t think I would be able to live without you. And I was right. I can’t live without you, and that’s why I will see you everyday, and you will always be with me. The paintings surround our home, and they are a part of you that I could not give away. I am terrified of the thought of not being able to see you or touch you. And unfortunately, it won’t be the same, it will be difficult. I’ll never go a day without thinking about you. Never.”

A wiped the tissue from my face and sat next to the tombstone, just staring. I had completely lost track of time. When I arrived home it was already midnight and everyone was asleep.
Next morning I had woke up to Linda, “Look out the window, Mom.”
I looked out the window, and I saw about a mile back, a line of people standing by the
Museum waiting to see these exquisite paintings. 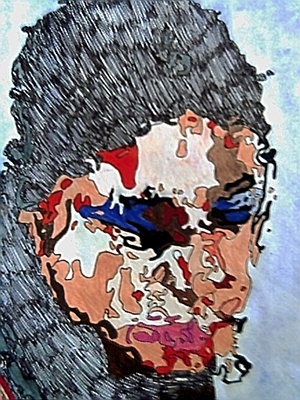