The cool water I splashed on my face did little to rid me of the impending doom of realization. My sister was dying. This very second.

For my big sister and only remaining relative, the hourglass of her life was running out. The bottom sand pit was growing, and every grain of sand that fell into it was another second of Annabel’s precious life. Annabel had tackled every one of life’s problems head-on, and she was always able to get herself out of tricky situations. She fought every dilemma wearing a grin, and she almost always won.

Yet, I stood frozen in the women’s bathroom, staring back at my ice-blue eyes in the smudged mirror above the sink. Half-dazed, I pinched myself to bring my mind back out of dreamland and I glided out of the bathroom.

Outside of room 12B, I stopped and took a deep breath. Was I ready? Did I want to see what lay behind the door? The answer to both questions was no. Regardless, I pushed the door open.

The first thing I heard was the beeping of the complicated machinery. When my eyes came into focus, I noticed Dr. Smith bending over Annabel. I hurried to her side.

Annabel’s usually tanned skin was a ghostly shade of white, and her arms were frail sticks from a young sapling. Her mouth was a thin line, and her eyelids were stretched over her brown eyes. I knew that if her eyes were open, they would be dulled.

“Lily. Annabel had requested to be taken off life support. In any case, our technology cannot keep her alive for much longer. This way will be more… peaceful for your sister. It’s time to say goodbye.” I nodded.

As I knelt by my sister, I felt the wave of heartbreak wash over me. I was a corpse, my heart was still.
`
I reached for Annabel’s bony hand and squeezed it in my own. Hot, nasty tears were welling up in my eyes as I whispered, “Bye Annabel. I love you.”

To my surprise, Annabel's eyes opened faintly and she smiled. Just a tiny tug at her lips, but her chocolate brown eyes smiled along, too. Her eyes slipped closed again as Dr. Smith began to take the needles out of Annabel’s pale skin. The beeping was slowing on the machine, and Annabel's chest heaved. The breath she let out, her last breath, came out as a sigh. The machine was dead. So was my sister.

Dr. Smith laid a hand on my shoulder for a moment. Then, he left, muttering something about paperwork. I barely noticed.

I stared blankly at Annabel, feeling nothing. Her face was calm. That would never change. She was gone. Dead at the age of twenty two.

Suddenly I felt everything. I saw Annabel’s life flash before my eyes. When I was four and she was nine, playing in the sandbox. Feeling her tap on my forehead in the middle of the night when I was eleven so she could sneak out of my window. Annabel wearing a cap and gown on graduation day. Her screwed-up face when our mother had slipped past to join the departed. The sound of her voice when she announced that she had cancer.

I closed my eyes, but the images did not stop. This time, the grief did not wash over me, I drowned in it. Before I really knew what was happening, I was gasping for air. Was it possible to die of an emotion? I thought I was.

The grief was maddening. I could not breathe. It was strangling me. Panting, I pressed my cheek to the cool tile floor. My mouth opened to let forth a terrible sound. It was a combination of a wail and a shriek; my eyes rolled back into my head and everything went black.

I lay on the floor for some time. Not one tear had been shed from my eye yet, but I knew they would come. After a few minutes, I dragged myself up to standing position. I stared at my dead sister for only a moment.

Abruptly, I felt the urge to run. Just to get away from the blinding white room, from my sister. Glancing around, I quickly exited the room that stank of death.

I jogged down the hallway, only seeing the white walls of the hospital.
All of a sudden, I hated the walls. I hated their peculiar whiteness; I hated the values they held within. We will cure, but we will not cure all. Annabel.

By now, I was running down the hallway. Nurses were looking worriedly at me and other patients were staring. I did not care. Past door after door I ran. My breath caught in my throat. I was going to die right here, next to the vending machines.

I stopped running and slid down the wall to sit on the ground. There was no one around me. I was safe.

My head fell onto my knees and I tried to take deep breaths. Fists clenched and jaw tight, I tried not to cry.

“Excuse me. Are you okay?” I raised my head.

A boy of about my age was standing there. He had tousled brown hair on the crown of his head that was falling into his deep green eyes. For a moment, I stared up at his face, not realizing that he was talking to me. 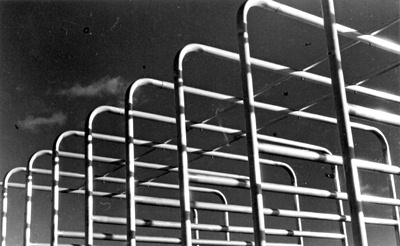