She stood beneath the bus stop sign, her bare legs trembling. A thin coat was veiled around her shoulders. No matter how hard she tried, her teeth continued to chatter. She was going to make it, she had to. There was no way she was going to miss the first show.
Her tights were torn in a few spots, but she'd tried her hardest to sew them back together. Her tutu wasn't as nice as some of the other girls that were performing tonight. She had her shoes in her bag, the only thing she’d managed to keep nice. Used and a bit worn, they were still nicer than everything else she possessed.
She continued to stand in the rain, vigilent, holding her bag over her head as the bus lights appeared and she remembered how she'd tried to start the car an hour ago. Tonight of all nights, it wouldn't start for anyone.
The bus stopped and its doors opened. She stepped into the warm, dry vehicle and paid the fare. She walked to the middle of the empty bus and took a seat in one of the cushy blue chairs.
She let out a sigh, closing her eyes and resting her head on the seat.
"Going to the theatre?" The driver shouted. She opened her eyes and looked at him, nodding. He offered her a sympathetic smile and continued driving. She took out her phone and flipped it open, checking the time.
She had half an hour.
It seemed like the bus ride took ages, and she willed the man to press harder on the gas pedal but it never happened. She stared out the window and wondered if her mother would be there, but as usual she was working. She used to be so angry that her mother always worked, but at the same time she was thankful. It was her fault her mother was always working.
She was deep in her thoughts and didn't notice when the bus slowed to a stop, lights shining through the fogged glass.
Before the driver could get a word of luck out, she was down the steps and bolting through puddles towards the theatre doors. She ran inside, the lights in the hallway dim before a euphoric glow encapsulated her like a gallient knight riding off into the sunset.
But it wasn’t a sunset… It was the lights. The lighting from seventeen minutes into the second dance routine. She knew because she’d practiced at home so many times that her toes had become numb, her thighs wouldn’t have burned more if set on a stove, and her shoulders felt like they weren’t even there, like her arms were floating a few inches from her body.
Walking quietly and stealthily to the back room, she watched as dancers prepared themselves for the stage, prim and proper, bows and lace covering them head to toe. The smell of floral perfume began to make her dizzy, but she pressed on, found her own stool in front of a lit mirror and began to clean herself up.
One of the light bulbs on the mirror had gone out, and it now sat there, sad and broken. The mirror itself was a bit smudged, and in an attempt to clean it, she wiped more mud from her own hand onto the glass. Never before had she related so strongly to an inanimate object.
Ten minutes elapsed when she heard her cue. Rising, she walked as gracefully as possible- in her condition- to her bag, unzipped it and removed her shoes. Slipping them on, tying them expertly, she took a breath and tip-toed to the edge of the stage. Other ballerinas were exiting now, tossing looks of pity at her like scraps you might throw at a mut.
But she ignored them, remained resilient until the bell tolled midnight and the piano began to play. She’d always wondered how she never got dizzy when she spun, around and around. Pretending that strings were holding her up and moving her limbs for her, she challenged her left leg by using it to propel herself forward. She couldn’t see the crowd. She couldn’t see the lights anymore. Her eyes closed, she hardly heard anything but the piano that played in the background.
Applause rung out when she’d finished, tears brimming in her eyes. Not from joy, but from pain. Suddenly she fell to the ground, screaming, clutching her leg. She removed the bionic lower half and stared at her blistering skin where her knee would've been had she been normal- like the other girls. It appeared almost burnt. People from the audience ran up onto the stage to try to assist her.
In the rush to the nearest hospital, she began rethinking her choice.
“You’re going to loose a leg, however, we’re testing out a new prosthetic. If you’d like, you could be our first test subject.”
She should’ve read the fine print. Should’ve studied it, read it backwards, forwards, checked every syllable. But she didn’t. She was so eager to sign the paper and be done with it. Done with the chemo and the radiation and the drugs. Now she laid in an ambulance car with two men in blue uniforms informing her that she would never dance again.
But at least she got a chance to try. That’s what she told herself repeatedly as doctors confirmed it in several different hospitals, every one of them telling her with a drop in their tone: There wasn’t another way.
At least she got a chance. 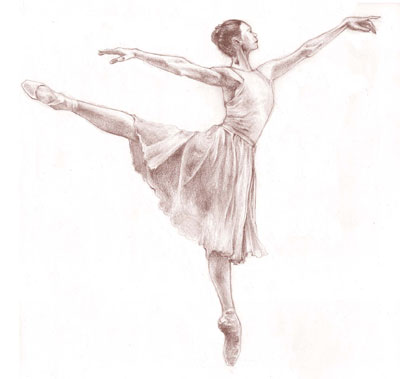 I don't know, half of this is a metaphor for something completely different, the other half is what came to mind at 2am. Here's the final product.