What exactly? When you advertise what's not for sale. No one's buying it, or at least no one worth it. I don't want to have to look at that, at you. Even if turn my head I can still hear your words. I can't tell which is worse, looking at you or hearing you. It's pretty much even.


Why don't you scream out desperate?


Or would it be more obvious than it already is? I don't think that's possible. I can see it written all over your face. Everyone can. Why don't you try insecure instead, it's a better word to describe you. You and your filth.


It's strange how your tactics aren't working.


Instead of rising up you're falling. You wish you'd hit the ground already, where you belong. Anything would be better than this. Waiting is the worst part. So you keep at your sordid ways, hoping it'll speed up the fall.


So you try to do away with the AD.


But it's too late. They all ignore you. Nobody will return what they took from you. Yes, took. They ripped you off. But you don't realize that, you've fallen too low. So you don't protest.


These are the consequences,


When you advertise what's not for sale. 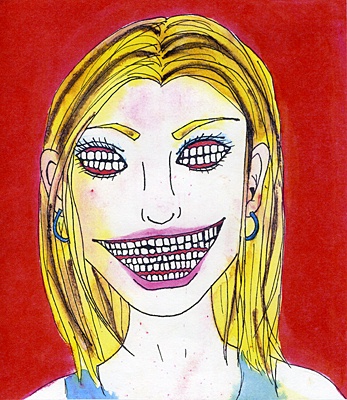 Favorite Quote:
"You take what you can get"

Favorite Quote:
"A good book isn't just words written expertly on a page, or words that stir up emotions in the reader. A good book comes not only from your imagination, but your soul." ~ Me ♥

View profile
This is very well written! I'm not very sure I like the way you portray this person though. I think it is very true, just very brutal.
SocialPariah GOLD said...
on Aug. 5 2011 at 1:14 pm
SocialPariah GOLD, Laurel, Maryland
16 articles 0 photos 14 comments

Favorite Quote:
A dream is just a recycled memory.

View profile
Incredible...Amazing write!
IWriteToFeel SILVER said...
on Nov. 6 2010 at 11:37 am
IWriteToFeel SILVER, Youshouldntknow, Ohio
8 articles 0 photos 13 comments
View profile
I love the analogy you had portrayed throughout the whole piece of work a human to something that isnt for sale. very clever! However there are some minor grammatical errors, and also the middle part is confusing. I think with some more work on this it would be incredible!
ManekiNeko SILVER said...
on Nov. 30 2009 at 6:49 pm
ManekiNeko SILVER, Cincinnati, Ohio
8 articles 1 photo 39 comments

Favorite Quote:
"It is better to keep your mouth shut and be thought a fool than to open it and prove it to be true."