Albany sat with composure, the way her mother taught her.

Enveloping her was a glassy pond, with water that felt as thick and cool as milk. Not that it looked anything like milk; in fact, the pond was quite clear, quite still. Little tadpoles with bloated heads bobbed up to the surface, then shot back to the murky earth, as still and as patient as monks. Smaller fish jetted around, minds vacant, jerking whichever way they pleased. The biggest and most stunning of them all, the orange koi, moved in a serene, unoccupied meandering. Dragonflies blew across the pond, as fast as anything. They were chasing each other for fun, for love. Albany hoped one would land on her, as they tended to rest for hours when they found a particular spot, but she feared their tiny touch. She flinched when they neared her, disregarding all her frail, human attempts to claim her own space. Space was collective here: you shared it or you had nothing. Albany liked things that way. Simpler. Quieter.

If only the world would pick up on that.

Albany looked around some more. Lotus blossoms huddled around fragrant grass blades and the thick, green matting of lily pads. They were glowing inside from their pale yellow centers, and their petals spread like points on a star. It seemed to Albany that she could take the petals off, one by one, and eat them. They were sugar pink, sugar white.

It is probably in order to mention that Albany was not a Buddhist. She was a Christian, as much as someone who neglected their Christian duties could be. This fact, of course, is useful to us because Albany was now visiting the public peace pagoda, a Buddhist temple of sorts.

The sun cast two burning eyes into the pool below. Little nubs of maturing pine cones drifted by, never to grow again.

Pine cone babies, Albany thought. This had a calming effect on her. She shifted on her rock, which was part of a bridge of stepping stones across the water. She thought for a moment, dipped her finger in the pond. It was blissfully cool. Albany brought the shivering finger to her forehead, her chest, right and left. Baptised. She felt wrong, somehow, using Buddhist water to commit a Christian act. But it was not truly Buddhist water, she supposed: it was collective water, collective space. Maybe all the religions were the same, in the end.

The bloated-head tadpoles lay undisturbed below, silent alligators. Albany wanted to take a lotus to her lips, kiss it. She’d send it back afterwards. But there were none close enough.

Still feeling misplaced guilt for her use of the pond, Albany set out for another place to rest. She dared not walk up to the pagoda itself, so she decided to sit by a simple monument instead. The temple was directly in the eye of the sun, and it glared. Bright white paint glistened. A small set of stairs began the journey, guiding the hand with thick bannisters on either side of the wide steps, and then a little garden of flowers and stones. Only a few more steps, and then there was the top. Above everything resided a deity Albany did not know, one with beaded, black hair with small bobs like tapioca boba and gold skin. Its eyes seemed closed; one hand was raised, waving at her. It had no shirt, just a cloth robe to cover its flank and legs. Odd characters, possibly belonging to an Asian language, rested, carved below the figure. They were too far away to make out. Little lips of architectural liberties sloped outwards towards Albany, like flower petals. A large, golden structure topped the dome.

It was far away, and it was going to stay that way.

A bug traced down Albany’s leg and she watched it go. Little traveler. She supposed she was a little traveler too. She sat, hunching over so her back would not touch the sacred monument.

Albany was sorry to tell it she did not know where it went, so she said nothing. Flowers surrounded her: the meadow kind, with petals like little white teeth; the yellow, commonplace ones, with bulbs like cacti; purple babies, blue, blue. Albany let them be. She looked at the temple briefly. Then again. Then again.

She was going up.

Albany remained, immobile, at the top of the stairs.

Then she turned and ran. She just kept running (she kept going) and didn’t stop, faster and faster until she was falling into the pond. She saw herself from a distance as an odd, dirty creature, and let the thing soak. She breathed. Albany wiped the intermingling of fluids from her eyes (water, sweat, tears) and did not move for a while. Then, she stood up, her whole body sagging under melting clothes, and walked.

Albany shivered for two reasons not to be disclosed. The first was that she was cold.

She swiped at the dragonflies filtering through her vision as she walked briskly away. She dared not look back. She dared not see the pond, the lotus she had wanted to kiss.

She dared not see the temple, glistening with sweaty sunlight and tears. 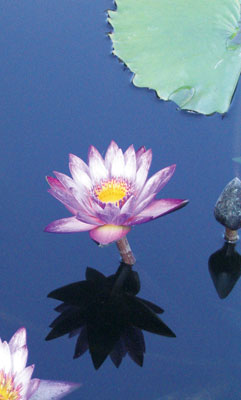 During my stay at an incredible writer's camp, we visited a public peace pagoda wih absolutely enchanting natural life. This whole story was written there.