Favorite Quote:
"It is no bad thing to celebrate a simple life." -J.R.R. Tolkien

Your dress is three thousand shades of white, just the way you like it. Always the one with the keenest eyes, even when everybody else couldn’t distinguish the difference between pearl and palest azure.

So, everyone who asks me always gets the same answer. I’ve known you for seventeen long years, and if there’s anything I’ve learned from that time, it’s that you’re not conventional. If you could do anything exotically, you would.

The aisle is overlaid not with a red rug, but with every single piece of clothing you were wearing on each date you went on with him. From my seat, I can see a jean skirt and a mismatched sock clinging onto a sun hat. Your grandmother is appalled that there is a bra in the collection, but I am not surprised. It’s you, after all.

The flower girls, six years old and eight years old respectively, do not toss rose petals, but Sticky Notes. According to you, you met him because he kept writing you love letters on those. I wish I'd thought of that.

People laugh in their silk and decor as they reach out with their hands, trying to catch the fluttering pink birds. The flower girls are smiling at each other toothily, their little crowns gleaming in the fluorescent lights, reminding me of the ninth-grade homecoming where you spilled punch all over your dress.

The music that your older brother is playing on the grand piano is not Canon in D or the classic Wedding March. Instead, it’s Party In The U.S.A. by Miley Cyrus because that was your favorite song for three straight years in middle school.

I don’t have to turn around to know you have entered the room. All around me heads swivel, eyes widen, and lips turn up. Your mother looks like she’s about to cry.

Finally, I lift my eyes towards you because I must, even though these kinds of tears taste about the same as joy. Your hair is chestnut red, gleaming different hues of mahogany and strawberry as you walk. It used to be blonde when you were little, but as you grew older, it darkened. It suits you.

Crowning your head is a tiara of Polaroids. I know without looking that I’m in one of them, and I know precisely which moment that was caught on camera. We were at summer camp, the one week in all of August where we got to escape our town and our parents and our responsibilities. The sun in our eyes, the dirt on our skin, and the grass at our feet, I had my hand shielded against the blinding flash of the camera. Your hand was grasped loosely around mine, and you were about to trip, your mouth open in a rose-petal O caught mid-laugh. The lake shimmers behind us, full of fish and bacteria and love. You have a piece of dried straw in your hair. That was the day we went horseback riding, and Almonds almost bit your handoff. Afterward I realized that the sky was the exact color of your eyes and the clouds your favorite shade of white, although you would correct me and say that your favorite shade of white wasn’t cloud white, it was ivory vanilla cream, but you would take eggshell if that wasn’t available.

The Polaroids brush against your smiling face. Your eyes are like stars, and your arms are draped with translucent lace, making you look like some sort of angel. I straighten my tie and try to swallow, but it must be too tight because it’s hard.

I can also tell that you’re not wearing any shoes. It’s like you, to walk your moment barefoot. If you wore high heels, you would totter around a lot, like a drunk zebra. That’s what you did at ninth-grade homecoming, and you were still doing it by senior prom.
Your collarbone is draped in diamonds. It’s heavy, but it’s your mother’s, and you didn’t want to disappoint her. Your ears are clothed in little metal flowers, sculpted from tiny bits of silver, dangling to your shoulders. You make sure to make eye contact with as many people as possible. That includes me.

I look away from you to him. He’s standing at the altar, his face golden and tears in his eyes. I wonder what the difference between an ocean and a hurricane is because it feels like both are living in my chest at this exact moment.

His tuxedo is also white. Champagne glitter, you’d say, but leaning on the pale side. Definitely not yellow. You’d be appalled.

A bit of your dress —the hem— catches my ankle as you go gliding by. The air feels cold and hot at the same time, and one of the flower girls smiles at me, so I just smile back.

He takes your hands, and the pastor lifts his spectacles, nodding. His hair is the color of iron. Party In The U.S.A. stops abruptly to be replaced by something that’s obviously been handpicked by you, uniquely selected. It’s A Million Dreams from that movie, The Greatest Showman, that you couldn’t stop watching. You once told me that it's the most romantic song in the world, in your opinion.

The pastor starts his speech, and I can’t help but focus only on you. One tendril of hair has escaped and it’s kissing your cheek. You don’t stop to wipe it away, even though you always found those annoying because your hands are clasped in his and you’ve never looked happier.

I don’t know if I can watch this part, but I do. I don’t think I’ve fully known the definition of joy before seeing your expression, at this moment, in your moment, in his.

And then he’s saying the vows. You’re also saying them, your pretty golden lips moving in sync to each promise, floating away from the breeze that I breathed from our childhood. Like dandelion fluffs, I watch them sing in the wind, but I don’t catch them. It would hurt too much.

Still, as I watch you, as he leans in for that final kiss that will seal you forever, all I can see is the kitchen at your mom’s house, and us making peanut butter and jelly sandwiches, and then you have an allergic reaction because no one had any idea you were allergic to peanuts back then. All I can see is that time when I found out you pierced your ears and could not stop staring. All I can see is that set of swings at our elementary school playground, the mulch stuck in the soles of your shoes, the piano you played. All I can see is Frisbees and bells and laughter and yellow and sunsets and beaches and trees that sing.

And then he kisses you.

Everyone claps, so I clap too. 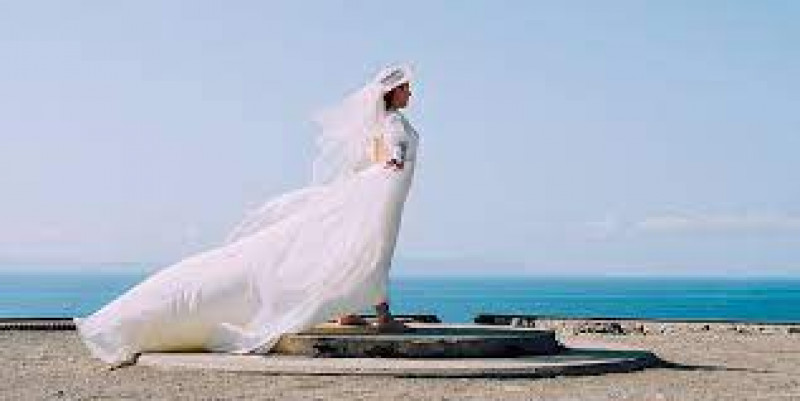 This piece was born from my fascination with all things romance and tragedy, originally written more than a year ago. I was in love and am still in love with the idea of selflessness when a person loves another—that you would go through terrible pain because you know that the one cherished to you will be happy. It's the sad ending that drives home the message.