Favorite Quote:
"The mind is everything, what you think you become."- Buddha

“AHHHHHH” I screamed with my hands over my face, “what the heck are you doing Travis!”

“Well, see I decided it would be funny if I snuck up on you on your date and squirted you with a water gun.” he said matter of factly.

“Well it’s not that uncommon.”

By this time my date Clint had gone and gotten me a few water balloons. I giggled. I threw a water balloon at Travis and it hit him square in the chest. It turned into a big water fight around the village, a cute little shopping center by my house.

He walked over to me smiling my favorite smile of his. I wonder if he knows he makes my heart beat a little faster every time he smiles. But I can’t be thinking about him like this, I have a boyfriend. He walks over and gives me a hug. Whatever, forget it all! I still like him. It wont ever stop, not with the way I feel. I wrapped my arms around him. Because we know each other so well we both, at the same time, splashed water balloons onto each other. Laughing and looking at each other we both realized that there was actually something there.

“Well” he said breaking my trance “I think your date finally bailed.”

“Oh so you just now noticed?”

“No, I wanted to make sure you were okay about it.” We were walking towards a bench now.

“Yea, well I’m fine with it.” I said sitting down. He sat next to me and pulled me close keeping his arm around me making my heart beat faster.

“Really?” he said not sounding surprised.

“We just don’t click. He doesn’t get me. Like the way you do.” I told him smiling.

“So your gonna break the guy’s heart.”

I laughed. “Yea, well I am in love with someone else.”

“Really? Who?” at this he sounded sad,surprised, and hurt.

I’ve known him since I was a freshman and we had one class together. We had been friends ever since. Even after he left our school last year.

“Oh.” I could see the sadness in his eyes that he was trying not to show it. He turned his head away from me. But still had me up against him and his arm around me.

“Travis.” I said softly. He didn’t turn around. I sat up and turned my body to face him. His arm fell off of me.

“Travis” I said again. This time he turned to face me slightly, so he was watching me out of the corner of his eye and I saw a tear roll down his face.

I remembered the last time he cried. His dad had just died in a car crash. I was the first person he had called. I remember his voice. He had been crying, you could tell he couldn’t even get out the word “my” before he choked up. I went to his house and we just sat there. I let him talk and cry. We have been closer ever since. I think I was falling for him before then but thats when I realized I was.

I put my hand on his cheek and turned his face towards me. He had his eyes fixed over my head.

“Travis” I said softly. There was something else in my voice that made him look down.

The second he looked down I kissed him. He was surprised at first then put his arms around me. Finally I pulled away.

“I didn’t get what?” he asked me smiling.

“I said I was falling for someone. But I was staring at you as I said it. I have been falling for you.” He smiled.

“Alex, you have been my everything since day one.” he told me as he put a hand on my face and he started to trace my face and lips. “At first I ignored the feeling but when I finally realized I was in love with you, you were with guy after guy.” he smirked “It killed me but I didn’t do a thing. So I acted like I didn’t care and dated other girls. But I did, Alex, I am completely and utterly in love with you.”

I was speechless for once in my life. His face was worried, like he didn’t know what I was going to say. He dropped his hand from my face. But I took it and laced my fingers through his.

“I love you and only you forever and always.” I finally said to him. Happiness spread across his face. This time he kissed me. And finally after a long time I felt whole. 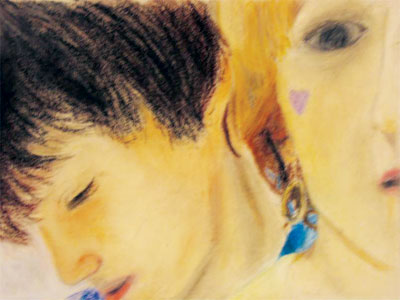 The author's comments:
some parts of it are parts of a dream i had. so its a personal piece
Post a comment
Submit your own

Favorite Quote:
"The mind is everything, what you think you become."- Buddha

Favorite Quote:
"Life isnt about waiting for the storm to pass, its about learning to dance in the rain."

View profile
that was so cute! keep writing!