Chapter 5
As I sat there I began to realize we had to get going. I stood up shifting Meggie’s weight so I could. Joseph was doing the same with Jason. I walked back into the clearing my mother gave me a curios look. Her face was still a little pale from the previous event of my father dying. I smiled and motioned for them not to talk. I set Meggie down on my blankets. The weather was chilly so I covered her.
Joseph did the same with Jason. Boomer came over and sniffed them both before accepting them and lying back down. Meggie’s chubby arm immediately wrapped around Boomer and held him close. She must have had a dog back home, wherever home was. All I knew is that they weren’t going home OR to an orphanage. I wanted to keep them. Mother and Father wouldn’t care since I would be in Joseph’s kingdom. His parents gave us a castle attached to theirs so when they died we could just keep them together and there would be plenty of space for them in the castle and it wouldn’t bother anyone. I slipped away to where Joseph was sitting on a log. I sat down on the ground next to him. I stared up at the sky there were small little snowflakes drifting down and I saw one land softly on my arm. The snowflake was brilliant white and it looked as if each little design was made by tiny elf like hands. The shape of each snowflake was different and specially made in its own way. I watched as snowflakes landed on Meggie and Jason and melted into their skin. I stood up and walked swiftly but silently to Meggie’s side. Then I picked her up my long brown hair like a veil across her body. Then I covered her in a large blanket. I looked over and Joseph was doing the same. He had Jason wrapped in a blanket and he looked safe and warm in Joseph’s large strong arms. ¬

After we had been walking for two hours my arms began to ache.
“I don’t know how much longer I can hold up carrying her like this! She is getting heavy!”
I whispered to Mother.
“Here how about we all take a break to get out of this snowstorm, eat those berries you found, and then when we get going again Rupert and your father can carry the little ones.”
“Okay Mother, good idea!”
I called to Dad,
“Father, can we take a break? My arms are getting tired and I’m sure Josephs are too!”
“Of course Sophia,”
My father said quietly.
“Joseph! We are going to take a break and then hopefully Daddy and Rupert will take the children so our arms can rest!”
I shouted softly to Joseph.
“Okay,”
He shouted softly back. In twenty minutes time we came to a clearing next to the road that wasn’t to close to the forest but was enveloped in snow. I set Meggie down and Joseph did the same with Jason. I quickly made a makeshift bed for them and covered Meggie and Jason with a wool blanket. Boomer bounded over and burrowed under the covers. I giggled as I watched him spin around getting comfortable. All you could see was a lump that was moving. I was worried that they would freeze but Joseph said they would be fine.
I set up a makeshift bed for Joseph and me, and then collapsed on the ground, exhausted. Joseph lay down and pulled me in close. I smiled contentedly. I laid my head across his broad shoulders. I fell asleep to the steady thump-thump of Joseph’s heart and his minty breath caressing my face. When I woke up I was all alone, no one was in sight. “Joseph? Mom? Dad? Rupert? Sylvia? KIIIIIDDDSSSSS?!?!?!?!?!?!?!?!?!?!?!?!?” Omigod I’m all alone. Oh, my, god. I started to hyperventilate. I walked slowly towards the dark foreboding forest known as The Forest of Hell. The stories my mother and father had told me flashed through my brain. I crept up to a gnarly tree and took a step in. Darkness instantly overtook. Sheer terror ran through my bones. I knew I might die here, and now. My corpse would fester and rot, I would never be found. I would never marry, be a mother. I would never hear Meggie’s tinkling laughter, like a bell. Never heard Jason, trying to mimic Joseph and be a big boy. I could almost hear them all now, Meggie screaming my name in terror “Sophiaaa! Sophiaaa!!!!” I heard Joseph’s masculine voice cut like a knife through the crisp darkness that filled me. 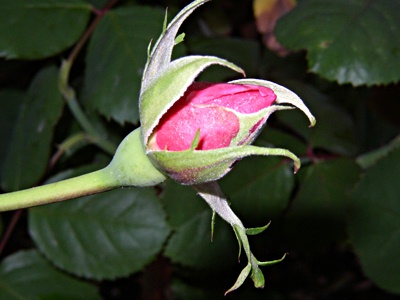 The author's comments:
this is part three and I havent written any more of my book so plz stay tuned for the next part :)
Post a comment
Submit your own