I can tell he wants to talk to me. His mouth his open in that awkward way, and his hand poised as if it is about to touch mine. I turn my head toward the wall and pretend to ignore him. After a moment, the bell dings, and the doors open. He raises his eyebrows at me politely… is he going to ask me my name, my phone number? He walks around me as he exits our room. The room where we first met. I glance at his back.


I smile at him as he extends his hand. I taste his name in my mouth, the word sweet on my tongue. He tastes my name, repeats it, and smiles nervously. His hand is cool. Not clammy, but just refreshingly cool. His lips are moving now, forming words that organize themselves into sentences that organize themselves into paragraphs. I don’t hear him. I just watch. Watch his brown eyes with green speckles as he laughs, his smile as he relaxes, I study him until I could ace any test he gives me.


He’s sitting next to me now, his elbows resting carefully on his knees. I can comprehend his words now. They make sense. He looks relatively interested in what I have to say. I smile. He towers over me and tucks my hair behind my ear. His lips move to say something like, Warm butter. That’s what I am with you, Jake. Warm butter. I melt when you ask me to, bend when you smile, turn into a puddle when you laugh, become stone solid when you accidentally yell at me.

Our fingers are intertwined now, his thumb rubbing my palm. It tickles. I shiver and he raises his eyebrows just like he did the first time we met. I smile shyly and he laughs, running his callused fingers along my jawbone. He yawns and reaches up to the sky. I smile as his arm coils around me again. You send shivers up my spine, Jake. I swear.

We are closer than ever before. Now he is leaning in. Closer. Closer. Closer. He is millimeters away from my face. I close my eyes. Its over before it started. I open my eyes and glance at him. Monarchs are dancing around in my belly, and the world moves underneath my feet. A black curtain falls over my vision rapidly in succession. He accuses me of being a flirt. I smile coyly. He laughs that Prince Charming laugh. The one that I love.

We exchange the three words that I have been waiting for since I first met him. He leans in and presses his lips to mine. My mouth is numb, my mind is blank. I am reeling. I pull the rope to the black curtain and it falls over my eyes once again. I stay there, in a blackout, until my cue line is said and the curtain is pulled up. I bobble my head up and down, I am a collectable toy.

His face is a tomato, his voice is thunder. Warm droplets fall down my cheeks, and I try to get rid of them before he notices. He certainly does notice. Slap.

I am in my bed. My head hurts. My vision feels like I need glasses. I struggle to rise. I am restrained by invisible rope. I notice a plum growing on my knee. A hyena’s laugh escapes out of my mouth.

My parents want me to talk. Talk to a circle of people that all have problems. It was only one time. The black curtain fell for too long, so? Who cares if I missed my cue line?

Flowers are sitting in a vase. A placard rises out of them. I know what it will say. I know what name I will taste if I examine the paper. I pick the flowers up and toss them in a bin.

He begged me to forgive him. “No.” I uttered. He raised his eyebrows, also surprised that I am not a collectable toy. 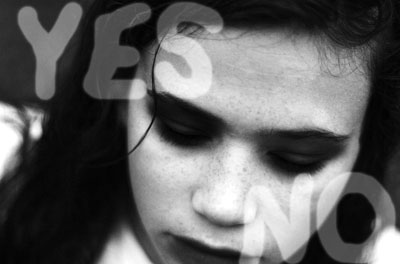 The author's comments:
I really got inspired from my friend tell me about her sister's best friend who was involved with dating abuse for awhile. It really made me want to speak out against this issue.
Post a comment
Submit your own

Favorite Quote:
"We're too young to know that certain things are impossible, so we do them anyway." - William Penn

View profile
That's kind of what I was aiming for, so thanks! I was trying to make it seem like things can change from good to bad really quickly. I hope that it came across that way, not like it was rushed. But thanks for your feedback!
Adaya BRONZE said...
on Jun. 1 2010 at 9:29 pm
Adaya BRONZE, Traverse City, Michigan
2 articles 6 photos 20 comments

View profile
in your authors comment you didnt seem to have experianced it yourself but i have to say, you pretty much nailed it. the emotion and relations are pretty much exact. very well writin. please keep writing, you have great voice(:
sparkofheart GOLD said...
on Jun. 1 2010 at 4:15 pm
sparkofheart GOLD, Plymouth, Minnesota
16 articles 2 photos 253 comments

Favorite Quote:
"I love you more today, than yesterday but less than tomorrow." <3
"Lifes a climb, but the veiws great." :)
"Laundry is the only thing that should be seperated by colour." <3
"Age shouldn't matter if the pair truly love each other." :)

View profile
It's beautiful. I like all the descriptive & emotive language you used. I love it.
Catiestar GOLD said...
on May. 28 2010 at 5:55 pm
Catiestar GOLD, Clayton, New Jersey
17 articles 0 photos 54 comments

Favorite Quote:
You be the anchor that keeps my feet on the ground, I'll be the wings that keep your heart in the clouds <3

View profile
Thank you guys so much!! I really appreciate all your compliments and your constructive critisism... thanks to you guys my writing will be able to take a step forward! THANK YOU SO MUCH!! I will most definitely read all your stuff, and I will rate it too! Thanks again!
once_a_redhead SILVER said...
on May. 27 2010 at 4:43 pm
once_a_redhead SILVER, Lady Lake, Florida
9 articles 0 photos 114 comments

Favorite Quote:
"love is somethin' we all feel even if we don't know that we do!!"

Favorite Quote:
Parting is all we know of heaven and all we need of hell.

It seems all the plot happened in a second.

Favorite Quote:
The hardest thing to do is watch the one you love, love someone else in return.

So much emotion, good for you for speeking out.

View profile
so in love with dis one! n im on da same page with u