I was afraid they wouldn’t approve of me, even though I knew Alley told them about me. Her parents knew about me, but they didn’t actually know me. I shivered, even though it was seventy degrees outside. The thought of her parents tearing us apart killed me.

I shook the thought out of my brain. I hadn’t even met them yet! I took another deep breath and got out of the car, walked up to the front porch and rang the doorbell, expecting her mom or dad to open it. Instead, Alley did.

She wore an empire waist, electric blue dress. She had on sparkly, rhinestone earrings and silver sandals to match. She had done her blonde hair up in a French twist with a few curly tendrils hanging down by her ears. She looked absolutely beautiful and I told her that.

She smiled and grabbed my hand. “So do you, Stephanie.”

I beamed, looking down at the black tulle and pink sash that composed my Betsey Johnson homecoming dress. She kissed me on the cheek and said we should go meet her parents and pulled me inside.

Her mom wore jeans and a sweater and had an extremely professional looking camera set up on a tripod and one hanging around her neck. Alley told me she was a photographer and I sarcastically said, “No kidding!” and gestured to all the cameras, which made Alley’s mom laugh. Then she told me I could call her Beth.

Alley’s dad wore khakis and black, square glasses. He had a glass of wine in his hand and told me his name was Tom. He said he was a writer and I told him that I was too. He smiled with his teeth and I noticed they were extremely white, just like Alley’s.

We took pictures for what seemed like forever because her mom kept trying to fix the lighting until Alley told her we had to go. We went out to my car and Alley waved goodbye to her parents and we said we’d be back by midnight.

We got in the car and suddenly, alley got out. she said she forgot something, ran inside for a few minutes and came back out.

She opened her hand and I smiled.

“Would you fasten it for me?”

Alley had the same necklace I had because she had given it to me. I fastened it around her neck, remembering how we were sitting on the couch with our arms around each other watching Cake Boss and she gave me the necklace and told me she had one too. I kissed her and she kissed me and then we went out to her little sister’s play set in the backyard.
We sat on the swings and Alley told me that her real name was actually Allegra, but she thought it was weird so she never told anyone. I asked her if I could call her Allegra and she said yes, but not in public and then we kissed some more and held hands. She also told me that she wanted to go to Iceland someday and she’d never told anyone that. I told her I’d take her and she smiled.
I finished fastening the necklace and we drove off to school to the gym, where homecoming was held. We pulled into the parking lot and Alley looked at me and I looked at her and then she kissed me. I felt special when I was with her. I felt special that I was the only one who knew she wanted to go to Iceland. I felt special that I was the only one who called her Allegra. I felt special that we wore the same necklace. It was a heart shaped, silver key and Alley told me that it meant I had the key to her heart and she had the key to mine.
“I love you, Allegra.” I whispered against her lips.
“I love you too.” she murmured, still kissing me.
And then we stopped, opened the car door and walked hand and hand into the gym. 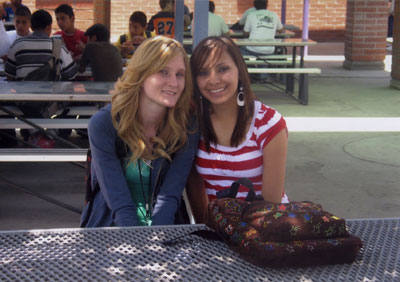 Favorite Quote:
If you love something let it go, if it comes back its yours if it doesn't, it never was!

View profile
Thank you sooo much! I am actually so happy to see that someone has commented on one of my articles that hasn't been published! It means a lot to me that you read my other stuff, not just the wokrs that are rated highest. Thank you!
MiNdLeSsLuVeRgIrL BRONZE said...
on Aug. 8 2011 at 7:36 pm
MiNdLeSsLuVeRgIrL BRONZE, Kenly, North Carolina
4 articles 0 photos 120 comments

Favorite Quote:
If you love something let it go, if it comes back its yours if it doesn't, it never was!

View profile
I love your stories there about a life not fairy tales!!!!!