Favorite Quote:
Don't ask what the meaning of life is. You define it.

“I told you on the phone. Five times.”

I rolled my eyes and looked at him. “She scoffed at your mother five times and you didn’t have the nerve to break up with her?”

Talon shifted uncomfortably in his seat and concentrated in the center of the desk. He always did that when lost in thought, and I was thinking that I ought to smack him ‘cause the desk wouldn’t solve his problems. “I don’t…know…” he said.

“Typical,” I murmured in a whisper and got a quick annoyed glance from him. “What do you want me to say, Talon? That it’s okay she offended your mother? That she has a cute smile and that’s all that matters?” I paused and shook my head. “You’re like all the other guys.”

“And you’re like all the other girls!” he snapped. “I don’t need your freakin’ opinion on it!”

“Then why in hell did you tell me?” I yelled back. Mr. Bart stopped in the middle of his speech about what type of chariots the Assyrians used and narrowed his eyes at us.

“Sorry, Mr. Bart,” Talon said, and a smirk grew on his face. “I asked Arni to marry me and she said she was saving herself for you.”

There were scattered laughs and I glared at Talon while Mr. Bart awkwardly straightened his suit that didn’t make him look any younger. “No talking in my class, Arni,” Mr. Bart said. I hated how he said my name. It was a weird name, but couldn’t he at least treat me with mercy and pronounce it right?

“Would you like to explain that to the principal?” Mr. Bart asked.

I glanced at Talon who was gazing at me with a muffled laugh. “Yes. You see, I spelled it wrong when I filed a restraining order against Talon.” More laughs. Chuckles. Snorts.

Talon rolled his eyes as we both got to our feet.

“Detention,” Mr. Bart growled, handing us the slips of paper.

“What’s our story this time?” Talon asked as we bobbed our way to the principal’s office.

“That you’re too lame to break up with your snotty girlfriend and that I have more guts than you do.”

“Alright, Arni. Seriously, I’m sorry for snapping at you back there.” He grabbed my arm and gave me that twinkling smile. It always worked. “Relax, okay?”

“Ugh,” I said as he pulled me into a hug. I wrapped my arms around him and chuckled. “I love you,” I said.

“I love you too,” he replied. It was casual for us to say it. We’d been best friends since we were five when I’d forgotten my lunch and he shared half of his with me. Ever since, we’d stuck together and I knew him like I knew my name. He was the smirky-laughing-know ‘em all kind of guy and I was the can’t handle this-I’m too cool for you-eat ya alive kind of girl. I was tougher, he was cleverer. He was playful, I was sarcastic. We weren’t opposites but we weren’t the same either. We were best friends.

Detention passed quickly with our constant games, trying to count how many whiskers the supervisor in the classroom had. My feet up on Talon’s desk and his feet up on mine, it was literally like being in our kingdom. After that, we went to his house and he ordered pizza while I cleaned his room.

“Once it’s clean, then you’ll see,” I said, throwing clothing into the basket. I always had to clean his room when I was around, and that was mostly why he came over to my house. “You like my room.”

“Yeah,” he agreed. “’Cause it’s like a soccer field in the queen’s mansion.”

His phone buzzes and he read the text while I raised an eyebrow at him. His face went white for a second and he looked up, eyes wide. I never had to ask him what she wanted, he usually just told me. But this time, he didn’t. “She’s coming. You better go.”

“What?” I said sarcastically. “She’s coming! Should I hide in your underwear? She can’t see me in here, it’s scandalous!” I laughed at myself while he took me by the shoulders and pushed me out. “Come on, Talon. Let her see me in here. That way she’ll break up with you and you don’t have to do a thing.”

“She knows you’re always around,” he said, his voice serious. “I don’t think she likes it.”

This made me stop and turn around to look at him. “Oh? What she gonna do about it?”

He opened the door and turned away. “I don’t know. See you later.”

“Whatever,” I scoffed. “Tell her I said hi and I’ll break her neck, okay?” He didn’t say anything back, even when I said, “I love ya, Talon.” And for that moment, it didn’t worry me. I drove out of the driveway, seeing a red car like mine nearing. The driver looked a little drunk, so I took a right and drove away.

Hours later after I went a little Talon-isn’t-annoying-me shopping, I drove past his street and found police cars speeding into it. Once the ambulance passed me by, my heart stopped and I turned quickly in the middle of the street and parked at the side, hitting the ground running. It was crowded and dark and there were so many police cars and I almost went dizzy yelling out his name. “Talon?” I was right. The accident turned up in front of his house and suddenly, a thought dawned on me. If Talon was gone, who would I be?

My lips started to quiver and I was shoving through the crowd furiously and panicking and crying at the same time which was odd because I never cried. And suddenly I was cursing Mr. Bart and the principal and the supervisor in detention and Talon’s girlfriend and I was even cursing myself because if anything ever happened to Talon Stripe, I would bury myself in the sand of the Sahara desert and die dry and alone.
I cursed myself five times.

“Ms.? Please step back,” said an officer, but I tore through his grip and found the red car I’d seen before sunk deeply into a yellow car. Talon’s car. A gasp ripped through my throat and I was screaming and running to the vehicle, searching around for him and finding blood dripping down the end of the seat.

“Oh my God!” I stuttered, fingers at my lips. The body lay lifelessly at the floor. I tried catching my breath, wiping my eyes. “Talon?”

“Arni!” yelled his voice back. I spun around and found his huddled figure sitting on the sidewalk. “Get freakin’ over here!” he growled, and I stood there, completely dazed. He was alive, his girlfriend was dead, and his tone was…angry?

I ran over to him, saw blood stained on his hands, and threw my arms around him, almost making him fall back. I was crying really hard and he was shouting something, and after a few minutes of that, he fell silent and my stammered senseless words dissolved into utter silence. “I thought you were dead!” I managed to get out, pulling myself far enough to search his face for any bruises. “You’re not dead.”

He stared back at me, wiping the tears off my face. “Where the hell were you?” he asked, anger in the edge of his voice. He glanced at the cars, melted against each other and his voice softened. His eyes drifted to the floor.

I didn’t know why but a smile came to my voice and I was laughing hysterically. “You thought…?” I chuckled and cried at the same time. “You thought I was in the red car? You thought…”

I froze, staring at the yellow car. There was a long silence. “I really wasn’t going to break her neck,” I whispered to him. “I wouldn’t have because I thought you loved her…and I love you.”

Talon curled his fingers against my arm and leaned in. Something disturbed him as he said, “She took my car and ran it into the red car for a reason, Arni.”

I opened my mouth to say something but couldn’t say a word.

“I told her that I was using her just so that I wouldn’t love you.”

Tears stood at the tip of my eyelashes as I looked up at him. “Why would you need a distraction from me?”

He looked up at the cars and pointed to the red one, the broken door being dragged away by some cops. He nodded towards it. “That’s why. ‘Cause it hurts a lot to love.”

I stared at the cars, unblinking. It was cold but warm in his arms and I felt so numb but oddly safe. “Maybe we should file a restraining order against each other,” I said. “Maybe that would be better. It would hurt less if we lost each other that way.”

His chest rose and fell as he laughed, shaking. “I think if we did, then Mr. Bart would have you all to himself.” 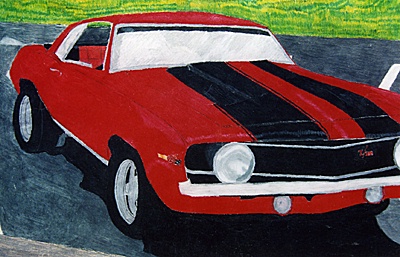 The author's comments:
Sometimes knowing a person too well, brings you to love.
Post a comment
Submit your own