The Perfect Kiss > The First Kiss

That first kiss was anything but perfect.

We were standing in your driveway after having watched “Troll 2” and laughing about it, followed by an awkward conversation about the nature of our relationship that ultimately ended in both of us admitting that we liked each other. So there we were, about to say goodbye, and I went in for a kiss on the cheek. Funny thing is, so did you. So I stopped and just stared at you and blurted out exactly what I was thinking:

“That was really awkward.”

You smiled and sort of chuckled and then I said, “Let’s try it again,” and promptly grabbed your face and kissed you. And I have to say, it was not the best kiss I’ve ever had. You didn’t seem to know what to do and I’m pretty sure you let out a bit of nervous/relieved laughter while I was still kissing you. Granted, first kisses with anyone are usually pretty awkward, but I’ve still had some better first kisses.

But when I left your house, I was smiling. It had been a kiss with the boy I liked, regardless of the quality or the fact that I initiated it. As I was walking home, I got a text from you that said: “LOL awk…I’ll practice more on my mirror,” and that cracked me up and reassured me of how much I really did like you, whether our first kiss was perfect or not.

Yes, our first kiss was anything but perfect, but today…

We were at your house and I’ll admit, I’d been dreaming of being alone with you like this for a while. Only problem was, we were a bit unsure of what to do with ourselves. You suggested a movie, I said okay. You told me to think of one, I couldn’t think of anything I thought you’d like. Finally, after about ten minutes of awkward indecision, you asked if I wanted to see the rest of your house and I, of course, agreed.

You showed me all the cool, random antiques and knick-knacks from other countries you had everywhere, describing them in detail, and then took me to the room where your piano was. I knew you played piano; you’d mentioned it before. So I told you to play me something and you sat down and you did. You played me Chopin’s “Waltz in A Minor”. It went on for about 3 minutes and I you made one or two mistakes, but it didn’t even matter. I just smiled and watched you the whole time.

It was amazing, really, watching someone concentrate so hard on the music, yet have their fingers move so effortlessly and so lightly, knowing exactly where to go through all the complicated trills and changing fingerings. And I think the most amazing part was that it was just you…you, who always shows me so little of who you are. You, who seems to be so apathetic about everything. You, who seems so logical all the time, here, creating something so carefree sounding and so beautiful.

When you finished, I moved from the chair I was sitting in right next to you on the piano bench.

“That was—“ I began, but you cut me off with your lips.

It was the right timing, you wrapped your arms around me just the right way, and you kissed me with the right amount of, well, everything that should contribute to a kiss. It really was completely and absolutely perfect…

That’s when I realized that the first kiss wasn’t the one that mattered, it was the first perfect kiss that did. 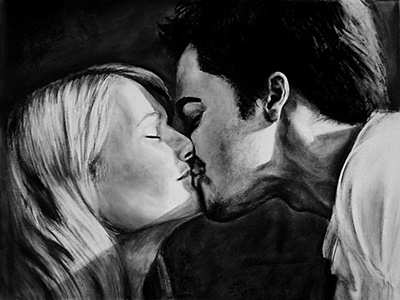 The author's comments:
Another article feeding my obsession with first kisses and perfection. Enjoy :)
Post a comment
Submit your own