When Mellony and I broke up, one of our best friends asked me if he could ask her out. He didn't know how obvious his jealousy was when we were together before, but it was. "Sure, Zak," I said, "Will you just let her know I still love her when the time is right?"

"Of course, buddy." He looked at me. I saw how painful this was going to be for him. I saw tears forming in his eyes, probably because I sounded depressed. "Jesse. You're not going to be mad at me, are you?"

"No. It's all right. She's mad at me anyway." Mellony walked by. "Go for it, Zak," I said, smiling at him. I felt a tear roll down my cheek. Zak jogged over to Mellony. I watched them from the safety of the circular table. I saw Mellony tell him something. Zak didn't look too happy. As he was walking over, Mellony caught my eye. She had beautiful eyes: blue with a purple tint. Her hair was long, thick, and brown with natural red highlights.

"Yeah. Can't handle being around people now." He sounded annoyed.

Zak cut me off. "I know. She knows, too, I can tell. Don't worry, Jesse." Why do I have to be so emotional? I was crying. Some of my friends started to walk over, they knew something must be wrong. Zak mouthed, "He'll be okay." Mellony loved me for my long range of emotions, and when I said, "I hate emotional people!" to Mellony's face, I meant me, not her. She was mad at me already and took what I said seriously. I don't even remember what she was mad at me about, but it was something stupid.

"You wanna see a movie?" Zak asked. He loves movies, he always had.

"Like what? Toy Story?" We laughed. Toy Story is his favorite.

He tried to look serious. "Yeah. What else?" We burst out laughing.

"Toy Story it is!" I yelled, still laughing.

"But first let's get something to eat. Since were here already, I mean." We were at McDonald's, my favorite fast food restaurant.

"No. You're in emotional turmoil. I'm paying."

"No. Not okay. I'm buying." We've had an argument like this before, only it lasted half an hour. It was about who was going to get number 21, the blue bumper car. Turns out, neither of us got it, because when we got done arguing, the bumper cars were closing. I really wanted #21, that's my lucky number and blue is my favorite color. Zak only wanted it so he could start an argument. He just loves to prove he can win. Not only arguments, but any kind of competition. There is one competition he's never won: who's the better singer? Me, of course. Mellony always comes in second place, Zak in third.

"Zak," I looked at him pleadingly. "Calm down. Okay? I'm buying and that's the-"

"This is getting kinda ugly. How about I buy?" I looked up. Mellony was standing right between me and Zak. "I got your favorites. For Zak, a ten piece chicken nugget meal. For Jesse, a double cheeseburger and large fries."

"I know, I was the biggest jerk ever."

"No. You were only half of the biggest jerk ever. I was going to say you apologized, or at least tried to. When I saw you a few minutes ago, you started to cry. I figured that was because of me."

"No. Well, sort of. I was crying because I knew I'd never get you back after-"

"ZIP!" Zak put his hand over my mouth.
"After what?" Mellony looked scared.


Mellony stared at me for a while, then looked at Zak, then back at me. "What?"


"You guys were going to watch Toy Story without me?" Mellony asked.


"You wanna come?" I asked, still surprised that she wasn't mad at me.


"Yeah! Toy Story is an awesome movie! Who doesn't like Toy Story?"


"Toy haters." We all said at the same time. That's a thing we have, a thing that links us together, makes us unbreakable. Also, we're always supposed to show how much we like each other. So, Zak and I would kiss Mellony on the cheek and we'd give each other hugs. Most people are used to it, but some just think we’re weird.


“Huh? Oh, right, the movie. Um, I guess at my house. And do you mind if Sophia watches it with us? Zak got her addicted to it,” I whispered the last sentence, and Zak didn’t notice. We looked at Zak, then at each other, then nodded. We knew we were thinking the same thing. “Follow my lead,” I told Mellony. “Deal, Zak?”


“Oh, uh sure.” I almost laughed at his clueless face.


“Oh are you watching Toy Story now?” Zak’s face was getting funnier every minute.


“What? Oh, no. You weren’t listening? Well, you agreed, anyway. Bye, Zak.” I turned around and bent down to get Mellony’s bag so I could laugh.


“Oh, so you did think my joke was funny!” Mellony laughed. She mouthed, “Pooh Bear?”


“It’s Salli’s birthday and we were going to take Shelbie and Salli to Winnie the Pooh LIVE.” She smiled at me. “Since we only had four tickets, we figured you wouldn’t mind not going.”


“Winnie the Pooh LIVE?” He almost cried. I was laughing so hard.


“We’re joking. But if you don’t get your butt up, we’re leaving without you. Then you won’t get to see Toy Story.” He jumped up, grabbed his jacket, threw mine at me, and gave me one of his let’s-go-before-the-movie-is-out-of-date looks. I shot back with my gees-Zak-be-patient-or-you’ll-never-get-to-watch-the-movie stares. I went up to the counter.


“Where are you going?” Zak said impatiently.


“Getting us milkshakes like we always do when we watch movies.”


“Oh, yeah. Okay. Wasn’t it Mellony’s turn to pay?” He was clueless today.


“Yeah, but she bought lunch. After Mellony it is me. You pay next time, okay?”

We walked out of McDonald’s and down the street to my house. I only live 4½ blocks away from McDonald’s, so it’s like my own little hangout. I suddenly realized something important: I left my keys inside the house. “We’re locked out,” I turned around.

“Yeah, we are. I just remembered that I left my keys inside because I was going to be at Zak’s house tonight.”

I stared at Mellony. “I thought you were supposed to be smart. WE HAVE NO KEYS!”

“Where’d you get that?” I asked, staring at the one shiny gold key that was dangling from the long, thin fingers of my best friend.

“But where did you get them?” I asked again.

“Your mom told Sophia to give us each one so if there’s ever an emergency, we could come get help here.” Zak explained.

“You know how much you just sounded like my mom?” I asked, about to laugh at his voice.

Of course he asks, “How much?” Typical.

“Too much.” Me and Mellony said in unison. 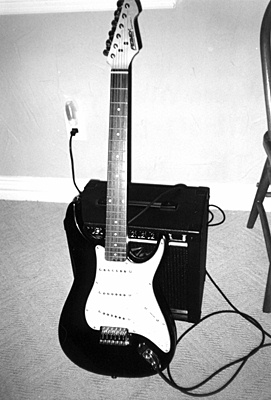 The author's comments:
This is only the first short scene from the story. I was going to write a novel if it was good enough to get published. Tell me what you think!
Post a comment
Submit your own

Favorite Quote:
Its not denial. I'm just very selective about the reality I accept. - Calvin

Favorite Quote:
They say it's what you make
I say it's up to fate
It's woven in my soul
I need to let you go
Your eyes, they shine so bright
I want to save their light
I can't escape this now
Unless you show me how
When you feel my heat
Look into my eyes
It’s where my demons hide

View profile
Thank you SO much for all the encouragement! I don't know why exactly I wrote it in a guy's point of view...but I did. So...I forgot what else I was going to say. But again, thank you guys for your comments. :)
rainbowdotz said...
on Sep. 12 2009 at 10:34 am
rainbowdotz, Sucat, Other
0 articles 0 photos 6 comments
View profile
this story got me interested:) gudluck on ur novel:)
Sarah said...
on May. 4 2009 at 3:08 am
That's really good! I liked it a lot. It's interesting and definitely something I would buy if it was made into a novel.