If you asked Nick what he hated more than anything, several thoughts would pop into his brain immediately. First of all, he hates ranch dressing. Second, Kanye West. No explanation necessary. People who sing well at karaoke, talk during movies, post about their relationship on social media, ... but none can compare to musicals. He shudders thinking about them. Nick has no problem with music, but when people break into song in the middle of talking - it’s the bane of his existence. It sure doesn’t help that his little sister, Bianca, is obsessed with musicals. Every other word that comes out of her mouth is “Broadway,” and of course, her favorite musical of all time is Wicked. So original. Not that he would know.

Nick walks downstairs from his bedroom to find his sister on the couch, calling him over.

“Nick, come here and listen to this! It’s so amazing, I promise. Idina’s voice is incomparable!” yells Bianca.

“Are you talking about Enchanted?”

“Yeah, that! Boy, that movie gave me a massive headache.”

“What?! How? It’s a masterpiece that deserved a gazillion Oscars.”

“No. The Social Network deserved Oscars. Not Enchanted. And gazillion isn’t a number.”

“Ugh, you’re so pretentious. Maybe that’s why Erin dumped you.”

“Hey, watch it. She dumped me because she felt that she needed time alone. It was not because of me, or anything I did. I think.”

“Keep telling yourself that. It’s totally not because you’re insufferable,” says Bianca.

Nick takes out his phone and scrolls through.

“This is sad. Let her live. She broke up with you with a handwritten note. It wasn’t even over text. You should be grateful, and move on.”

“B, what if I don’t want to move on? Erin has.. had.. been my girlfriend basically since middle school. Cut me some slack,” says Nick, frustrated.

“Okay… I’ll ‘cut you some slack’ if you watch a musical with me, without complaining,” exclaims Bianca.

“ALRIGHT! Jeez, I’ll watch a musical with you. As long as it’s not Les Mis,” says Nick.

“Don’t worry, it’s this new one called The Perfect Melody.”

Little does he know of what was about to come next.

“Sounds awesome!” says Nick, through his teeth, with a very fake smile.

“Yay! This is going to be the best day ever. Before you know it, you are going to become a Sondheim stan!” exclaims Bianca.

“See, this isn’t even realistic.

“Nick, you take everything too literally. Let loose. Try to enjoy for once. Have you heard of the word fun?”

“Contrary to what you may believe, I actually do know how to have fun. You know what’s fun? Getting drunk and going with your friends to a karaoke bar to sing songs you don’t know the words to.”

“Shut up, this is important! It’s the main character Melody! Her big solo where she sings about-”

“Not true! M-maybe? I hate it when you’re right.”
“Oh? I love when I’m right,” replies Nick, with a smug expression.

Bianca looks back at the screen, and grabs the remote to turn up the volume.

“Aww, I love this part! Melody is telling James how she feels, and they have this sweet duet and…”

“Pause. Let me go get a pillow so I can strangle myself.”

Bianca starts singing (very much off-key) along with the song, to Nick’s complete and utter dismay. Listening to it in the musical is bad enough.

“Please never actually be in a musical yourself,” says Nick, muffled since he is covering the entirety of his face and ears with a pillow.

“I wish I was in a musical. You’re the worst. Just watch. AND listen.”

“Nick.. this might sound crazy, but I think she is looking at you,” says Bianca

“You’re saying she can see me? And is actively looking at me wherever I am?”

“Ok, ok, this is insane,” says Nick, as he starts to sit back down.

“JUST DO IT! She’s following you. She’s walking forward, towards you. She’s still singing the duet to you. Um… Nick… NICK..”

“WHAT?!”
“SHE’S CLIMBING THROUGH THE SCREEN! MELODY IS LITERALLY TRAVELING INTO OUR LIVING ROOM THROUGH THE T.V.! THIS IS AWESOME! IT’S LIKE A PORTAL!”

“HOW IS THIS AWESOME?! IT’S IMPOSSIBLE!”

“APPARENTLY NOT, BECAUSE SHE’S HERE.  BESIDES, I THOUGHT YOU LIKED SCI-FI.”

“IT WOULD HAVE BEEN COOL, if it wasn’t a musical.”

Melody falls onto the carpet.

“Hi, Melody, I’m Bianca. Oh my gosh, you are even prettier in person. I didn’t think that was possible. I don’t know if this is weird to say or not, but I’m a huge fan.”

“Music what-a?” says Nick, as he walks up to Melody.

“Are- are you James?” exclaims Melody.

“Ohhh no. This is bad, very bad. I think I was supposed to be singing with James-”

“Yeah, you’re definitely not supposed to be here. If it helps, you came through that T.V. right there, maybe try running into it again and see what happens,” says Nick.

Melody faceplants into the television screen.

“Ouch. Again. This is the worst day ever. Normally I repeat the same story over and over. Always predictable, never changes, always happy ever after,” says Melody.

Melody opens her mouth and begins to vocalize.

“NO. No. Oh no. Absolutely not. No singing. This day is weird enough.”

“Come on Nick, let her sing. It’s literally who she is. Her day is much worse than yours. Maybe her singing will somehow trigger the portal again and she can go home.”

“I can see that,” hisses Bianca.

Melody looks at Nick and Bianca, with a flustered and confused expression.

“Even I noticed that. It must be bad,” says Nick.

Melody faints. This is not looking great for anyone involved.

“Bianca, go get ice packs in the freezer. We gotta get her awake again. I don’t feel like having a character from a musical die in my house.”

“Okay!!” Bianca runs to the kitchen and opens the freezer. “Um… Nick? We don’t have any ice packs.”

“I’ll have to run to Elle’s house. It’ll take at least twenty minutes.”

“Alright, better than nothing,” Nick pauses. “What are you waiting for? Go!”
“Okay, okay. I’ll come back as soon as I can.”

Bianca runs out the door. Nick walks over to Melody and checks her forehead.

“You’re burning up. You look really pale. I should go get a washcloth, that could help.”

Nick walks over to the sink and runs warm water over a soft towel. He walks back to Melody and places the washcloth on her forehead. Nick starts humming to himself. Melody’s eyelashes start to flutter.

“Melody? Are you waking up?”

“Were you just … singing?” responds Melody.

“Same thing! That was a song from my musical!!”

“Whaaaat? It was? Hmm. It must have been catchy,” says Nick.

“I got the impression that you…”

“Well, that you, perhaps, disliked musicals,” says Melody.
“Wow, where’d you get that idea? Just kidding. Yeah, I’m not exactly a fan.”
“If you don’t mind me asking, why not?” she asks.

“I mean- it’s not personal, I think you’re quite good. Well, your musical is good. It doesn’t suck. I hated the opening, but any scene you were in was great; anyways that’s not really the point, it wasn’t just you, the whole thing was less… bad… than other musicals I’ve seen. I guess,” said Nick, very awkwardly and quickly.

Was Nick… nervous? While talking to a girl? Interesting. Very interesting.

“Oh. Thank you? I think? You know, at least to me, you’re extremely amusing. I mean that as a compliment.”

“Seriously! I’ve never met anyone like you. Where I come from, men are perfectly polished, never say the wrong thing, and are endlessly optimistic and chivalrous.”

“Well, I’m no Prince Charming or knight in shining armor with a heart of gold and the voice of an angel,” says Nick.

“I know. Again, I love it. I’m honestly tired of guys like James. He’s too perfect. And we don’t have anything in common other than singing and being each other’s love interests in the story,” says Melody.

“Wow. I like you more after you fainted. Not that I wanted you to faint-” says Nick.

“That’s cool. Hey, could I ask you something?”

“So, recently, my girlfriend broke up with me.”

“What do you mean “broke up?” says Melody.

“She ended our relationship. We were dating, and now we’re not.”

“Wow. That never happens where I’m from.”

“That actually may be a good thing. Break-ups hurt. Anyways, my question was: my sister, Bianca, said that my ex dumped me because I was uptight and boring. Do you think I’m uptight and boring? Is it so bad if I am?” says Nick.
“I think I don’t know you well enough to say. But, if I were to take my best attempt, you need balance. Be a little cynical, but have some optimism. Listen to musicals with Bianca. Just because you had a bad ‘break-up,’ that doesn’t mean happy endings don’t exist for you. You haven’t reached that scene in your life yet,” says Melody.

“Wow. That was insightful. Are you sure you were part of a musical?”

“Hey, that doesn’t make me naive. Wait, the lyrics.. I’m starting to remember them!”

“It’s only the lyrics for the duet. I can’t sing it alone, or it won’t work.”

“Bianca’s not here.. I guess I have to sing it with you. Here goes nothing…”

Nick starts singing with Melody, which is way outside his comfort zone.

“No way. The portal thing is starting to open! Look at the T.V.!”

Melody runs towards the television screen, and Nick follows.

“Hey Melody… Are you sure you have to go back?”

“Oh, we definitely did. Not to be forward, but I have more chemistry with you than with James even if there were a gazillion kisses in the musical!”

“I’m flattered, especially since James is a very handsome guy.”

“Eh, I think I like them a little more scruffy.”

“Did you just call me scruffy?”

“Would it change your mind if I started singing an emotional love song about how much I want you to stay?”

“... Actually, maybe. On second thought, it’s still a no. I’m gonna miss you, Nick. Even though you’re pretty cynical. And harsh.”

“Hey, you may have changed my mind a little about musicals.”

Melody squeezes Nick’s hand and walks over to the TV.

Melody fades into the television portal, and Nick has a bittersweet smile on his face. Suddenly, it is silent, and Nick is standing, motionless. The front door violently swings open.

“She went back home.” 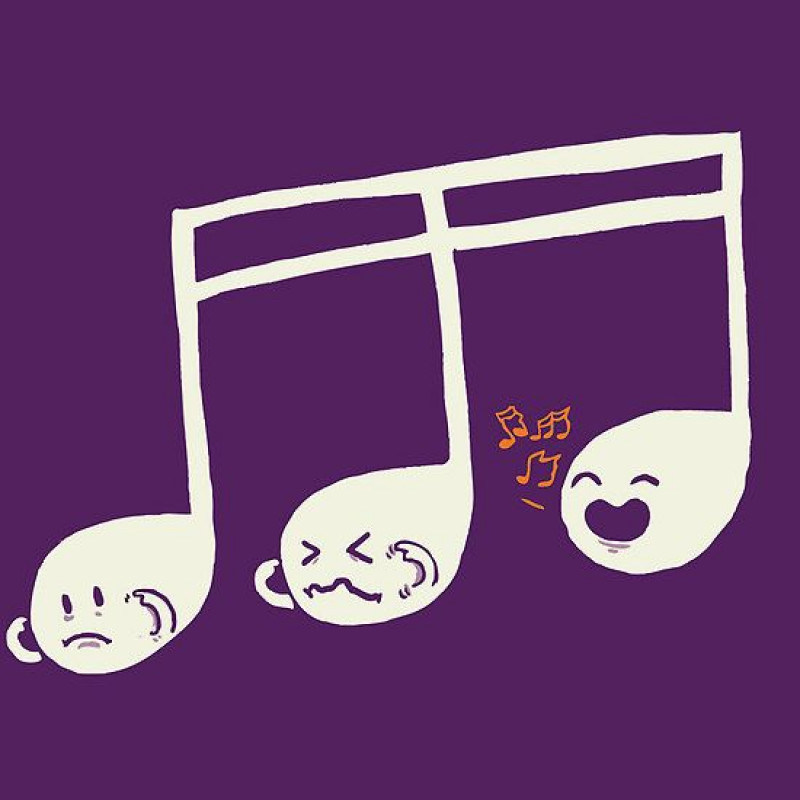