Xander took another small bite of his pancakes, quietly observing the world around him. You see, Xander was a reaper. The only one in existence, in fact. He was what humanity had nicknamed the Grim Reaper; he was the embodiment of death. And in the small town that he was in, someone was about to die.

He hummed a mournful tune under his breath. Xander had always hated his job. It was nice to be back on his home planet and all, he just hated that someone had to die for it. He would spend an eternity away from home if that meant that he never had to collect another soul. Being a reaper was a torture that he wouldn’t wish on his worst enemies. He glanced at his watch. Five more minutes. He ate some more of his pancakes.

Every so often, a member of the public would notice him and shudder. They wouldn’t understand why, but the black haired, formally dressed man would terrify them to their cores. No human liked the sense of death. Death symbolized a doomed sense of inequity, the idea that you hadn’t done nearly the amount of things that you wanted to in life. Maybe it was an unresolved conflict. Maybe it was a crush that you never got to act on. Whatever the issue was, it weighed on them. Sometimes, they would even want to try again. Why? Xander couldn’t explain it if he tried. He had no idea why they would want to go through that all over again. He would grant those requests though, because who was he to deny them? More often than not, though, humans would break down when they died. They would scream. They would cry. They would give him such a soul crushing look that Xander almost couldn’t do it. Sometimes, humans would even run from him. When they ran, Xander wouldn’t stop them. He would only watch sorrowfully as they doomed themselves to a millennia of loneliness, an eternity of wandering the earth as spirits who refused to admit that their time was up. Humans, more than any other species that he resided over, were the most afraid of him. His watch ticked down the seconds. Four more minutes.

Around the café, people smelled like anything from the bitter tinge of lemon, to the sweet scent of fresh baked cookies. A normal person wouldn’t have been able to make heads or tails of the jumble, but Xander could. Near the door, a man lit his first cigarette. Xander picked out his scent from the masses. It was suddenly much sweeter than it had been. Xander finished his second pancake, digging into his third. 3 more minutes.

Outside, a woman scolded her child for stepping out in the street without looking around first. Both the woman and her child had very bitter scents. Despite what the mother was saying, both she and her child would continue on to live very long lives. Xander got halfway through his last pancake. Two more minutes.

He could have heard the sound of that speeding car for miles. The atmosphere began to smell overwhelmingly sweet. Xander finished his last pancake and sat back. One minute.

Police sirens began to wail in the distance as Xander waited. Thirty seconds. The speeding car careened around the corner as another car began to turn directly into its path. They would never know what hit them.

The cars crashed directly into each other. Pedestrians ran screaming.

The café’s occupants abandoned their meals and rushed outside. Xander simply stood up, pushed his plate aside, and calmly walked out.

As soon as he stepped foot on the ground outside, he felt himself shrink. His form now reflected that of a young boy. As a reaper, his job was to guide souls to their personal afterlife. He was to make them as comfortable as he could on their journeys. It was the least he could do.

The young boy’s spirit stood outside the cars, listening to his mother’s screams with tears streaming down his face. The other driver was unconscious. He smelled sweet, but not deathly sweet. Xander would only take one soul today. He closed his eyes, pain thumping in his chest. The worst part of his already undesirable job was the children who died before they had even reached a decade. The boy in front of him, who couldn’t have been more than six years old, could have grown up to do something spectacular. He could have invented a piece of life changing technology, could have cured cancer, could have gone on to do something so amazing that the world would have been forced to take notice. He could have gone down in history. But because he had died so soon, the world would never know what he could have been capable of.

Xander approached the boy warily. He had no idea how the boy might react to him, and he certainly didn’t want to scare the child away. It was much better to air on the side of caution. The boy crinkled his nose as Xander drew nearer. He smelled what Xander smelled. The horribly sweet scent of death.

“It’s time to go.” Xander whispered. The boy sniffed, wiping furiously at his tears now that he realized someone could see him.

“Is she-Is she gonna be okay?” He asked. His words were punctuated by pitiful little sobs that shattered Xander’s already broken heart into smaller pieces.

“She’ll be fine.” Xander confirmed. He would have lied even if the boy’s mother hadn’t lived. The boy attempted a smile and then nodded, “That’s good.”

Inside the mangled wreckage, the boy’s mother screamed. Even in her drugged haze, she knew what she had done. Xander shook his head. As soon as the ambulances got there, she would be transported to the hospital. The police were already there, doing their best to take hold of the situation. It crushed him, how much they cared. It made Xander hate his job even more than usual.

“Are you an angel?” The boy asked.

“Yeah,” Xander nodded. The urgent screams of the ambulances drew ever closer. Xander hated that sound. The boy flinched.

“Can we go now?” He asked. Fear had burrowed its way into his voice. Xander, in response, simply held out his hand. The boy took one last look around his hometown. He noticed the paramedics as they jumped out of the ambulances. He watched them drag the driver of the other car out. He watched them drag his still sobbing mother out from their vehicle. It was when they extracted his broken and mangled body from the passenger seat that the kid flinched again and turned back around. Xander smiled sadly at him. The boy made an effort to return it.

“I’m Charlie.” He said as he grasped Xander’s hand.

“Xander.” Xander returned. He watched Charlie’s spirit peacefully fade away. As always, he lingered for just a little while longer at the scene of the boy’s death. Charlie’s mother was still crying. Xander didn’t pity her.

Her fate was simple. After being transported to the hospital, she would fail a drug test. They would have cause to arrest her for driving under the influence. She would be found guilty and would be charged with the death of her son. She would spend the next few years in prison. Eventually, she would meet her end in a back alleyway, dying of a drug overdose. When that happened, Xander would come for her, just like he came for everyone. He felt himself grow back into an adult as he pried himself away from the scene of Charlie’s death.

Another human’s cries bounced around his skull as soon as he turned the corner. These cries were those of a wounded solider. They wouldn’t get to her in time to save her. He walked on, his head bowed.

A reaper had to have a strong mind to be chosen, but Xander knew that when the time came, he would welcome insanity. No being in the universe could tolerate so much pain and sorrow forever. That was how they knew to choose a new reaper, when the previous one had gone insane from seeing so much pain and strife for so long.

He felt his suit and tie transform into a soldier’s uniform as the world around him slowly melted into a different one. Screams and gunshots echoed around him, punctuated by the occasional explosion. He sighed mournfully. 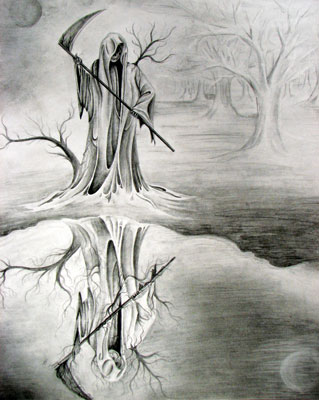 I wrote this early 2020 I believe, somewhere around there. It was born from the thought of 'What if someone could smell when someone was about to die?' and kind of went of the rails from there.