In the depths of the forest surrounded by the whisper of the wind and the towering trees intent on greeting all who enter their realms, lives a girl. Seaming to be like the other girls she has heard about, but she is different. She doesn’t know why but she has been able to do things that no one else can for as long as she can remember. Unable to figure out what it is, and ever so intent on figuring it out.

As the night falls the girl sits down by the fire she hadn’t started by hand and wrote down the day’s events. “There was a great storm to the east today. It moved over the shelter and soaked the ground, as well as the rest of my possessions. I have to rebuild my shelter as the wind knocked it down. It shouldn’t take long though. I got very lucky in the sense that none of the supports were broken. It is only a matter of time until it is back up again. But tonight I will sleep under the stars, until the first light of dawn breaks through the trees, and I am able to assess the rest of the damage that has been inflicted upon my poor shelter. Tomorrow is also a very special day because I will be fifteen tomorrow. It will also mark the tenth year that I have lived without my parents who abandoned me in these very woods so long ago.” The girl closed up her journal, crawled into her sleeping sack and let the whisper of the wind and the chirping of birds in the distance gently lull her to sleep.

She started a fire, again without touching anything, and started to skin the bear. The dagger she used felt like it was made for her hands. It fit to every niche and crevice that made them up. Once the bear was skinned she laid out the fur to dry and started to dry the meat. Seniki left out a small chunk which she wrapped in a leaf to save for dinner that night. She dried the rest, seasoning it with berries and herbs that she had in a small pouch. By the time she was done she had fifteen big rolls, and twenty-seven smaller rolls, definitely enough to last the winter, as the big rolls were equivalent to thirty small rolls themselves. Next she focused on the bones. Seniki started with the ribs as they would be the easiest. She started to splinter and chip them until they were all the right lengths. From there she moved to the rest of the bear. By the time she was done the skin was dry. Seniki rolled it up along with all the meat and needles that she had newly accumulated and started back to camp. It was nearing dark when she reached her shelter. As she entered the place she called home the fire started up again with no more than a glance. She crawled into her shelter, unrolled her sleeping sack and with her belt, bow and quiver next to her she fell into a peaceful sleep. 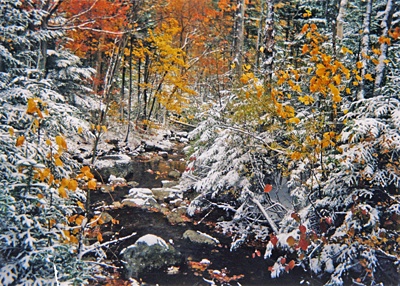