I work one night a week babysitting. Every Friday I made my way to the Wilson’s to baby-sit their three year old son, Damian. He was a sweet, intelligent little boy, with strawberry blonde hair and blue eyes. I never suspected anything different about him however; just that he was always a little down when his parents left for their date night. I guess it was to be expected however, I mean, what three year old didn’t cry a little after his parents left? This particular afternoon was nothing special.

I walked the short two blocks to the Wilson’s, only stopping to text on my cell. When I arrived they were waiting for me by the door, in a bit of a rush.

“You know the drill, April,” They told me, “emergency numbers by the phone, help yourself to anything in the fridge, and don’t be afraid to call for help.”

I nodded, knowing all of this. Damian sat on the living room floor, playing with his toys. “Bye!” I called after his parents. Then I turned to Damian. As soon as I had shut the door he began his routine crying. I knew how to handle it. I walked up and picked him up. He reached toward the door.

“Honey,” I said to him, wiping the tears off his face. “Their coming back later, they always do don’t they?” He said nothing, just cried. Usually it was pretty easy to comfort him, but today, not so much. I could feel my cell phone vibrating in my back pocket, but I ignored it.

“Not…comin…back.” Damian spat out through the tears.

“Sweetheart,” I explained, “yes they are.” He just shook his head. My cell phone vibrated again. Again, I ignored it. It went on like this for awhile. Eventually I pulled my phone out to check the missed calls. Just then the house phone rang. I put Damian down, it only made him cry worse, but I had to answer it.

“Ma’am,” It was a man’s voice, “Is this April Daniels, the babysitter?”

“Yes,” I said, beginning to panic.

“This is Officer Mendoza; I’m calling to tell you the Wilson’s, the couple you’re babysitting for have been in an accident. They died instantly after their car flipped five times.” 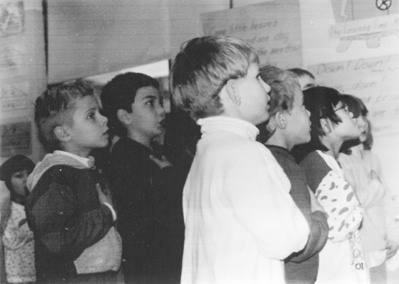