Vamps and the Moon Part 2

“Are you sure you should be driving?”

I turn to give him a sharp look. He winces. “With eyesight, hearing, and reflexes like mine? There isn’t a better driver in the world.”

“Alright…” He gets in my car. “I just don’t wanna be here if you hit a deer and decide to…dispose of the body.”

“Adam, that rabbit will tide me over until we get to Dmitri’s. There, I’ll have his leftovers. Plus, when dawn comes, I’ll transform back and you won’t have to worry.

I pull out of the subdivision and aim towards the expressway. “It should take us about an hour and a half if traffic’s light. Which it should be, considering that it’s—“I checked the clock on the dash—“almost one.”

“Where does Dmitri live?” he asked, trying to sound light and innocent. My ears picked up his strain—he’s trying to conceal jealousy.

“In a cave. Like I said, we vamps are territorial and human-haters. I’m the exception; the freak.”

“Clarissa.” He says firmly. I turn to look. “You are in no way a freak. If you weren’t like this, you wouldn’t have met me. Or… you would have, but you would have eaten me. Thank God you are who you are.”

Wow. A sudden warmth spreads through me, starting in my chest and extending to the tops of my icy fingers. He really likes me despite my handicap, as I like to call it.

“Tell me about you—how were you bitten? Have you met any other vampires? I want to know everything about you.”


I smile. His interest in me was awe-inspiring at first, and now it’s cute.

“It was a dreary November night in Ireland. Sometime the exact date escapes me…But one day, mid 1700’s, my cousin Mary returns from a trip to Egypt changed. Mary was pale before—it was Ireland, after all—but now, she was snow-white. Her gait was stiffer and quicker than before. Other than that, she looked the same. But as soon as she came home from her three-month trip, she was gone. She touched back and then fled.

“That exact day, I left the house to find her. I loved her a lot, and after three months, all I wanted to do was hug her and hear about her travels. Well, I found her alright—at 11:59 on the night of a full moon. She tried to get me to leave the cave she was seeking refuge in, but I ran to her and threw my arms around her. And like I said, once you get a whiff of a human during a transformation, the hunger takes over.

“I awoke days later. She was sobbing in a corner. Long story short, I left for the American colonies soon after that—and I’ve been here ever since.

“I’ve met other vamps. Not too many. Mary’s met Vladimir, Dmitri’s dad, who lives in Germany; Jeanette in France; and one called Gramps, who resides in Greece. I know Dmitri, the ones in Canada, Jose and Diego from Mexico, and the triplets from New York, Nancy, Natalie, and Natasha. Those three are vicious.

“There are almost a thousand, so obviously I have a lot more to meet. But we all still keep in touch.”

“What,” Adam cuts in, “you guys have your own social networking site? Vampbook?”

“Oh-ho, you’re funny. No. We have a chat room—Western Vampires. It’s for the Americas. For the ones living in remote places, we talk by letter. Usually shipped by bats. Mary emails me the details of those four in Europe. We have yet to discover any in Asia. Oh, and Africa. Don’t even get me started. But hey. We have all eternity to find them.”

“By bats?” he yells. “That is so freaking cool! Are they your minions?”

“How should I know? They just respect us.” I laugh. “You don’t know how relieved I am that you like all this.”

As Adam opens his mouth to reply, my phone rings. I pick up. “Yellow?”

“Wha?” It’s Dmitri. Never in my entire life has he sounded so terrified. And when you hear a terrified vampire, it tends to terrify you.

“What’s up?” I ask, my hand starting to quiver, causing my cell to vibrate against my head.

“Death toll?” I echo. Vampires are immortal. We don’t die. “Stop scaring me, Dem. What do you mean?”

“I mean vamps are dying and Jose and Diego are here. They ran all the way from good ole Mexico to warn us. Please come.”

A memory flashed in front of my eyes. I was crouching, shrinking into a towering oak, defenseless as a child. I was a baby vampire, new to America and new to my body. Roaring-Cougar stood before me, snarling. “Why would you, a scrawny little vamp, dare to trespass here?” He raised a razor-sharp claw as I whimpered, “Och,” squeezing my eyes closed and anticipating sure death.

I heard a struggle and then silence. When I opened my eyes, blood stained the moonlit forest. “Are you alright?” a German voice said gently. A rough voice, but nevertheless brotherly and comforting. Another vampire stood before me, even bigger than the monstrous American Indian one, who was currently splattered all over the foliage. This was how I met Dmitri.

How could this tough vamp be in near-tears with me over the phone?

“I’m on my way.” I hang up and chuck my Droid in the backseat. “Looks like we’re taking the scenic route,” I hiss.

“What’s wrong?” Adam asked. I can smell his fear, sickly and ambrosial, hanging in the compacted air of the car. 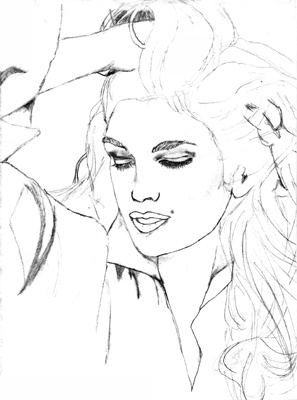 The author's comments:
It took me nearly a year, but I wrote part 2 :) Many apologies to the people who liked part 1 so much. I promised to write pt. 2, but hey, better late than never.
Post a comment
Submit your own