Have you ever wondered why your perfect plans are shattered? Why a seemingly perfect romance ended? Why good luck strikes at strange times? Why life seems like a bunch of meaningless chaos?

There is a very simple answer to all of these questions. We were created by an ancient race of aliens and are nothing but characters in their stories, created to alleviate their boredom.

As soon as they are old enough to write, they are given a computer software program and a manual with only the most basic rules of their writing universe. In order to create a new character, they must collaborate with other aliens to make sure two human parents give birth to a child. This child will be under their control from the moment it is born until the moment it dies.

You are always subject to the whims of your creator. Everything you say, everything you do is controlled by them. Usually, the aliens have jotted down things they want to happen during your lifetime. But some aliens detest this and make random decisions as to where your life will go. This is where chaos comes from.

Our planet is relatively new, but the aliens have become bored with it. The best writers among them have declared that the Earth is a cliché, boring universe. They have decided they want to write in a new, more exciting world, so they have taken a special vote. It was this vote that decided how our world will end.

“Why don’t we let a black hole swallow their planet?”

“What if the Earth spontaneously combusts?”

“Okay, why don’t we knock their planet out of orbit and send it crashing into the sun?”


“Fine. How about we give all their world leaders bad cases of paranoia and see what happens?”

And so, our world will not end with a bang, but with slow decay. Our increasingly paranoid world leaders will declare war on each other and humanity will slowly die out. But, since the aliens lost all interest in us, we have gained something we never had before: free will. It is now up to us to decide our fates—and the fate of our planet. 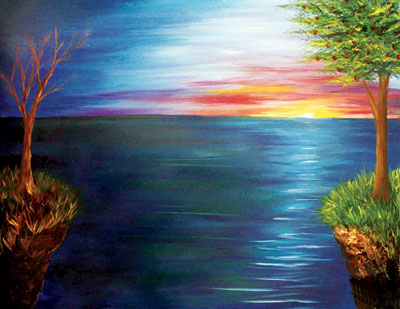 The author's comments:
This was just a random idea that sprang into my head a few days ago. Feedback is greatly appreciated!
Post a comment
Submit your own

This article has 330 comments.

JAyalaValles BRONZE said...
on Mar. 1 2022 at 4:45 pm
JAyalaValles BRONZE, Vinton, Texas
1 article 0 photos 1 comment
View profile
I really like the dialogue. It was shocking when the aliens said that some of the ways to destroy the earth were boring or overdone. I'd say you should add more to the story. it is a fun read but it feels very short lived
مريم BRONZE said...
on Jan. 5 2022 at 8:56 am
مريم BRONZE, Glasgow, Other
3 articles 0 photos 8 comments

Favorite Quote:
Everything is hard, before it is easy

View profile
Interesting reflection - although fiction it makes one think about why things are the way they are. I absolutely disagree that its to alleviate extra-terrestrials' boredom :) A nice story though
TessaDreamAuthor_3000 PLATINUM said...
on Dec. 15 2021 at 2:17 pm
TessaDreamAuthor_3000 PLATINUM, Tomball, Texas
35 articles 2 photos 141 comments

View profile
Haha, I liked the ending part:
"Sure. Why not?"
DanteT6 said...
on Sep. 13 2021 at 12:45 pm
DanteT6, Arizona, Arizona
0 articles 0 photos 3 comments
View profile
I like this story because it gives amounts of humor with fiction. You get to see and think of the ways this could be happening. Some of the details are left out which is great because for me it helps me imagine it myself more and see what I want to see with a mix of what the author has made for us.
Bella_Queen DIAMOND said...
on Apr. 3 2019 at 1:26 pm
Bella_Queen DIAMOND, Plymouth, Ohio
80 articles 25 photos 79 comments

Favorite Quote:
Perseverance is not one long race, but many short races one after the other
-Walter Elliott

Favorite Quote:
When something bad happens, you have three choices: let it define you, let it destroy you, or let it strengthen you.

Favorite Quote:
It has been said that time heals all wounds. I don't agree. The wounds remain. Time - the mind, protecting its sanity - covers them with some scar tissue and the pain lessens, but it is never gone.

View profile
Wow, this is such a creative concept and I daresay the aliens' plans are coming true...
MaryGarter GOLD said...
on May. 12 2017 at 5:24 pm
MaryGarter GOLD, Lawson, Other
16 articles 0 photos 1 comment

Favorite Quote:
"A ship is safe in the harbour but, that's not what ships are built for."

Favorite Quote:
"All was well"

View profile
I actually think this has a lot of potential. I know this is just an idea that you had but what if you made the aliens have a conflict that influences a humans conflict? You know, sort of like playing doll's house but with serious consequences and it gives a lot of room to play around with character development and other life "big" questions. You can even mock them, if that's your thing.
ThrillQueen126 said...
on Oct. 17 2015 at 3:41 pm
ThrillQueen126, Seattle, Washington
0 articles 0 photos 46 comments
View profile
It's kind of fun to think that I'm controlled by an alien. Whatever I do, it's not my fault!!!
hhhjjhh said...
on Oct. 6 2015 at 7:48 pm
hhhjjhh, Yuuuuuu, Massachusetts
0 articles 0 photos 10 comments
View profile
This article made me laugh! I love your concept of how aliens decide the outcome of the world. This would be such an awesome, award-winning story idea. I can imagine the scene where the aliens are sitting at their computers, discussing their plans. I've added this article to my list of favorites!
Funne GOLD said...
on May. 10 2015 at 10:10 pm
Funne GOLD, Cleveland, Ohio
19 articles 0 photos 48 comments

Favorite Quote:
"I never ask a man what his business is, for it never interests me. What I ask him about are his thoughts and dreams."

Favorite Quote:
"What does it matter?"

View profile
Interesting. Reminds me of an episode on Unsealed: Alien Files show, where humanity is actually being controlled by an Alien computer. It also reminds me of the Matrix, only with aliens instead of machines. Overall, an interesting idea.
ashlynnnicole BRONZE said...
on Dec. 1 2014 at 5:33 pm
ashlynnnicole BRONZE, Bonneau, South Carolina
1 article 0 photos 1 comment
View profile
This is interesting but cliche. Everyone talks about us being characters in books or dolls or a show for God- this isn't specifically original, just a twist on a widely exercised topic of thought that they decided to submit. By the way, check out my story please! Go on my account... the title is "I Am You". It is Science Fiction.
jimi211 said...
on Oct. 13 2014 at 10:52 am
jimi211, Las Vegas, Nevada
0 articles 0 photos 6 comments
View profile
CarrieAnn13, you had a good concept going, but I think Molly,Jane was right, it is a little cheesy. To further add to it, though you did a good job at making the end morbid, by the climax I felt there still wasn't really any substance.
Molly,Jane SILVER said...
on Jul. 26 2014 at 11:57 am
Molly,Jane SILVER, West Granby, Connecticut
7 articles 0 photos 16 comments

Favorite Quote:
Life is what we make it, always has been, always will be. ~Grandma Moses
A heartbreak is a blessing from god. It’s just a way of letting you realize he saved you from the wrong one. ~ Unknown

View profile
I actually think it's a little cheesy and there isn't really anything that is creative about it. Aliens is all well and good but people are interested in new and different ideas, they want to know what these aliens look like, or maybe a personal story about one of these aliens with it's struggles and how it handles it's human or how they make a special or different bond that is out of the ordinary. I like how you ended the short story with our having free will, but maybe you could have gone into more detail in how exactly that occured.The whole part about the world ending is something that everyone has heard before. IT isn't new and it doesn't grab the audience, but i think if you wanted to work on this some more or elongate it you could improve it.I just thought you'd want to have a true opinion.  Keep writing, with more practice you could really do well.