It’s an old night. An even older war. Bombs spew trails of toxins as they fall from the bellies of planes, throwing violet and orange burstlets on the deeply pitted earth.
A Banshee Bomber just under a cloudbank. Wireless instructions are spirited away by roaring static. Fat raindrops blur the windshield, and steam rises from the fizzing barrels underneath the plane’s wings.
Max slams the lever between his legs, releasing a bomb. He hears the shriek, feels the destruction. His hands sweat while he grips the steering levers through leather gloves, ignoring his stained conscience in the name of orders and duty and ethics. The dashboard’s sickly green lights wink. The Banshee dips.
Max doesn’t notice, too busy wiping the sweat off his forehead. He’s terrified already. The lights flicker again, longer this time.
Max feels the Banshee’s drop, and glances at the fuel gauge. He frowns. Over a quarter left.
As the controls deaden again Max realizes why. Engine trouble. His headset sounds the triple beep. Altered instructions. Max doesn’t listen as the fruity voice speaks in tongues of Alphas and Oscars. He’s too busy writhing in his seat, punching buttons and clenching his teeth against the inevitable.
Two minutes later, Max knows that the Banshee is going down fast. Perish with his bombs in action, or abort the mission and try to save his skin?
Max has always known he was a coward. Still he instantly regrets pulling the lever again, and again.
With the bombs gone, the Banshee is lighter. After a last cough from the engines, the plane starts to fall. Nausea ripples down Max’s sore spine as he wrenches the ejector lever.
In a billow of white silk Max shoots from the plane. He’s no higher than five hundred feet. Above him the crafts, both man-powered and remote, spin about each other in a lethal dance of gasoline and revenge. Max’s exhaustion lofts him above the moment, and the plane’s spontaneity transforms into a magnificent waltz. He’s just about to hum a childhood tune when he hits the crusty ground hard and is dragged for several feet.

Max knows he’s shivering before he opens his eyes. The pale light assaults his vision and the pain in his leg, and he rolls over, the nylon parachute’s cords digging into his neck. After he licks his chapped lips Max opens his eyes and struggles himself upright with his elbows. He’s landed in a field. Overnight a light snow has fallen, tickling his sleeping eyelashes. The dark, soaked patches of his uniform can still be seen underneath the flakes. A small grove of standing trees stands sentry on his right. Other than that, blank ground surrounds him. The epitome of peace. Max half-believes in tranquility until he falls back. The scars from last night’s battle drape the sky above like rotted Christmas decorations.
Christmas, Max thinks, closing his tired eyes. He can see it now; the shiny tinsel, wonderful sweets, and searching his house. He wanders the house with his cousins, turning every knob. Searching for gifts. Late nights and too many sweets. But those petty luxuries are gone now. Entertainment has been replaced with propaganda years ago.
Max thinks of the bombs he dropped. All that to save his rotten skin. He’s going to die out here anyway. Anger and humiliation flower inside him, and in a burst of energy he punches the broken leg, stars soaring in his head.

Dying can turn any man into a philosopher. Max’s mind dances in circles, arriving at the only simple fact: I’m going to die a rotten coward, he thinks over and over, working his mouth against thirst. Hours have passed, and night has come and gone. All Max craved in the noisy barracks was silence. Now, the noise of a plane is a blessed relief from the chews of guilt and hunger. This is what I deserve. Max moans and turns his fevered head, stretching his legs under the dried fabric of his navy blue uniform. He’s thrown off his gloves long ago, and with one hand rubs the small silver cross around his neck. Max has never considered himself a religious man. But as his sister pressed the small piece of jewelry into his hand months ago on the airstrip, Max wore it as a reminder of her. Now he thinks about God, and souls, and an afterlife, if there is one. As Max fingers the cross he wonders if perhaps there really is an answer in the symbolic piece of metal. At any rate, he’s got nothing to lose. Everything’s already gone.

An awkward period of dehydration sets in sometime in the next day, flinging Max on wondrous mental adventures that fold between gorgeous and hideous scenes. Max is aware of almost nothing now, except thirst, fear, and pain. Aside from moaning his sister’s name, Max feeds himself in the more pleasant sections of his fever dreams with thoughts of the cheap romances he enjoyed with any girl he fancied. As his dreams reach their climax, Max opens his eyes. Under the indigo sky, starlight is still visible under a thin haze of cloud. Max can almost hear the pulsating music radiating from the stars, and they comfort his eyes and ears with their celestial, spontaneous rhythm. A bright bit of material wavers across the sky and flares out. Maybe there is a God.

Over the next hours the stars are Max’s closest friends. Lifted into the sky under their sweet arms, he walks among them, sniffing the pearls in the moonflowers and sleeping in clouds of star haze. Up so high the air is thin, but it slows Max into pleasant dreams. There is no pain in his leg anymore, and Max feels a vivacious joy sleepwalking with the stars. As he snuggles against the bonfire of a palm-sized spark Max’s world blurs as the music of the spheres sings a lullaby to him.

In a flare of panic, the sun, a ravenous, fiery beast is directly above Max, closing in with jaws of fire. With a sobbing breath Max looks for the stars, but they’ve been consumed in a pale blue void that’s too bright, infinitely too bright. Max covers his eyes and cries for deliverance, but he can’t get away and is being swallowed by the infinitely bright monster from the heights. As Max knows the animal will tear him to pieces, the sun disappears. The stars surround Max again, comforting him. Max opens his charred eyelids to see his sister, dressed in starlight, leaning over him. She kisses his forehead before handing him a flask of water. Max drains the flask as his sister speaks to him in her low, calm voice.

“Everything’s gone, Max.”
“You’re gone too. I’m seeing a ghost.” His dried lips mouth the words on his tongue.
His sister shrugs. “These are strange times. There’s only one thing I’m sure of.”
Max whines and tries to turn his head. His sister leans forward and holds it.
“Max, accept the Savior. It’s the only way.”
“For what?”
“To win this war. And all the others, too.”
He moans at this comment. “It’s beyond hope. I’m beyond hope. I love you, but I’m a scoundrel.”
His sister lays a small hand over his mouth. “Shh.” She starts picking pieces of stubbly grass out of Max’s hair.
“We’ve been over this so many times.” Max says. “Why don’t you go?”
“I keep talking because I love you too, Max. You’re at rock bottom now. The only way out is up.”
Max’s leg convulses. He feels the delicate indentation of grass underneath the leg. “Through, you mean. I’m bound to die soon. Then this madness, and you, will be gone.”
“Don’t say that. We could be together for eternity.”
“I just want quiet. Leave.” Max has his forearm over his eyes.
His sister doesn’t speak, but reaches down Max’s collar and pulls out the silver cross. Max feels her and opens his eyes. To both of their surprise, his eyes are brimming with tears. He whimpers like a child and points to his leg. “It’s infected now.”
His sister pulls up his pant leg, sticking to the wound and reopening the sores. The broken skin is oozing, the skin radiating red lines, deathly pale and hot. It’s horrible to see, and worse to feel. “Oh, Max.” She closes her eyes and whispers peacefully to something other than Max. Max closes his eyes too, and for a moment feels her peace. He consumes it too fast, making his heart sick.
Max’s eyelids flutter as a sob hurts his middle. “I want to go home.” His hands pull at the grass as his leg pounds with his pulse and the anchors of his skin plead for mercy, for relief, even for a cot in a grimy field hospital where he can be surrounded by others like him, praying the same prayer, just wanting to be anywhere but near-screaming bombs and noisy rooms and cramped spaces and cheap socks.
And it’s all gone now, anyway, so what’s-
Where’s his sister, the unbearably pure thing who speaks to Max with her joyful news of a Savior? Not here. Max knows that he’s too far gone and has spent the only life he’ll ever get on nothing.
Her whispers to someone other than Max reverberate back at him through the frosty night in the pasture. The peace he felt, the satisfaction of knowing that someone other than his sister and parents loved him, a scummy piece of underserving, tainted, creation, loved him more than his sister had, more than Max valued his own self.
And Max, with this epiphany, throws aside the shackles of emptiness and tries to believe. The pain is overwhelming, now filling the mind, encompassing the body.
The field is very silent.
With a groan Max surrenders himself to the Savior, to the cross around his neck, to that just tangible veil of love, groping from rock bottom at the chance of a future without bombs, only the gentle light from sunflowers and the ocean.
He opens his eyes, vision blurry at the edges from the protesting leg. Above him the stars still twinkle.
Max’s mind is going. His eyes won’t stay open, and his heart is sleepy.
Max smiles at the stars before his eyes close. He thinks of grace. 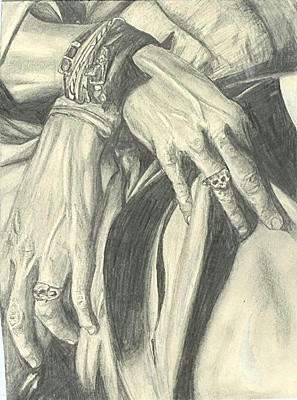 I regard Bombs Away as a piece of Christianity-hued science-fiction. I feel there are not many stories that bridge the gap of this occasional juxtaposition. As you read Max's story, I want you to imagine a retro-futuristic setting, one that holds vintage images, but is still open to the imagination. I hope you come away with the knowledge that no soul is beyond redemption.